Will Sony Pictures, and new 007 Daniel Craig, bring the franchise back to its glory days—and re-introduce us to the real James Bond, as Ian Fleming created him?
By Frank Smith|October 25, 2005

So, we have a new James Bond. Brit actor Daniel Craig was introduced last week as the new 007—and the first blond Bond at that. And Pierce Brosnan, still shaken and stirred over his surprise sacking after four films in the title role, is now a bit of film history.

Daniel Craig as the new 007

On announcing their choice for the new Bond, a Sony Pictures press release called Craig "a superb actor who has all the qualities needed to bring a contemporary edge to the role." The release also promised that Craig's debut in Casino Royale next fall "will have all the action, suspense and espionage that our audiences have come to expect from us but nevertheless takes the franchise in a new and exciting direction."

The cynical among us aren't so quick to buy it. Press releases trumpeting big changes! are as common in Hollywood as power smoothies and fitness gurus. Studios are always eyeing the bottom line, and if an actor, direction or hair color gets in the way, they're jettisoned faster than you can say "Timothy Dalton."

But such changes are often merely cosmetic, because studios aren't about to mess with a sure thing. Hollywood's Golden Rule decrees that if a picture finds even moderate success, the formula must be used again. Would Sony dare to make serious changes to the most successful franchise in film history? Hardly. 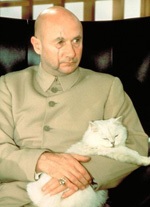 But what about us Bond fans who'd like to see some "serious changes." What about those of us who've watched Dr. No and From Russia With Love a dozen times, who remember characters like Goldfinger, Oddjob and the diabolical Ernst Stavros Blofeld? What about fans who long for a return to taut, tightly directed Bond thrillers just over-the-top enough to be entertaining (like the Fleming novels they were based upon)—and who are long over the gargantuan, sex-and-special-effects nonsense the pictures have become?

The last two films in the series (1999's The World Is Not Enough and 2002's Die Another Day), with dead-on performances by Brosnan, were steps in the right direction—eschewing some special effects, ratcheting up the tension. Now Brosnan's gone and we're told more changes are at hand. Real changes, or cosmetic ones? Changes for good or bad? Is there any hope in that announcement for us Bond fans?

The first cause for hope can be found, ironically, in the aforementioned gushing press release from Sony. Besides "all the action, suspense and espionage that our audiences have come to expect," producers Michael Wilson and Barbara Broccoli also made a statement that gives me hope: "It has been a long time ambition for us to film the first book in the series, Casino Royale, which defined the complex character of James Bond."

Those two words—"complex character"—highlight the biggest difference between the Bond of the original Ian Fleming novels (and the first four or five of the films) and the sprawling, almost caricature-like movies that followed in later years.

In the beginning, James Bond was not the unstoppable, irresistible super-spy we've come to expect. He was human. While skilled and intelligent, he wasn't superhumanly so, and at times would go down hard to his opponents. He felt both pain and fear. He bled. He suffered physical and emotional scars. In one memorable scene from Moonraker (a novel sadly bearing no resemblance to the film version), the realization that his country's only chance of salvation lay with him, on his shoulders, left him literally shaking.

The real Bond often grappled with loneliness, and the excesses of the movies—wine, women, playing cards at Monte Carlo—were frequently shown in their proper light: as ways to crowd out the empty room that waited for him at the end of his assignment. This made the most moving scene in Bond history—from the novels and the films—all the more powerful: the conclusion of On Her Majesty's Secret Service. Following his marriage to the Countess Tracy Di Vicenzo, Bond's one chance at companionship is shattered as his new bride is felled by an assassin. She dies before his eyes, just as the credits begin to roll.

It was this humanity that made the character's heroics all the more compelling, anchoring the stories even as the exotic locations, sophisticated gadgetry and larger-than-life villains entertained and enthralled. But somewhere along the way, someone calling the shots came to believe that bigger was better: if the audience liked a fast car, they'd really like a fast car with built-in machine guns; and if they really liked a car with machine guns (and oil slick projectors and ejector seats), they'd just love a car that could turn into a submarine. This typical Hollywood "logic" soon colored every facet of the films as the explosions became louder, the women sexier and the gadgets sillier. 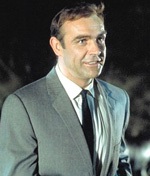 Sean Connery's interest began to wane after a while

After a while, Bond's humanity was all but swallowed up in a comic book world. Sean Connery's interest visibly waned with each picture, and after Diamonds Are Forever he declared that he would "never again" step into the character (hence the in-joke title of his next, and—so far—final Bond picture: Never Say Never Again). Scriptwriters left Roger Moore, the gifted actor who inherited the role from Connery, little choice but to play the character almost tongue-in-cheek. Villains ballooned from "larger-than-life" to elephantine caricature, the plots became unbelievable and the movies became camp, their sole remaining ties with the books being their titles and the names of their main characters. Everything else was rewritten and spackled on by studio heads who thought the public wanted bigger, bigger, BIGGER Bond for their money.

With one short-lived exception (an attempt to darken the character in 1987's License to Kill, a misfire that bored critics, lost audiences and was quickly abandoned), the tone of the Bond franchise was frivolous … until Barbara Broccoli took over the producer's role in 1995. She began to move the movies back from the brink: hiring Brosnan as Bond and Judi Dench as "M," and seeking gifted writers and directors outside of the usual Bond stable. Critics noticed and hailed the changes, and the films made money, which justified her risks to the studio.

So while I don't understand their decision to fire Brosnan, Wilson and Broccoli do have a degree of credibility on their side when they talk of their hopes for the franchise. If in going back to Casino Royale (the novel that introduced Bond nearly fifty years ago) Broccoli plans to likewise return to the movies' original synthesis of humanity and heroism, the believable and the fantastic, we have good cause for hope. Their credit at this table is good.

Another reason for optimism is more pragmatic: the target audience is changing.

When Bond's character (and the tone of the films) began its spiral in the late '60s, clouds of war, dissent and governmental mistrust were everywhere. Moviegoers increasingly flocked to the theaters for escapism and fantasy, and the "bigger is better" formula found receptive audiences.

For the franchise, the shift paid off. Bond movies became international events, the characters became more well known, and the studio grossed millions with every offering. Whenever they made a small move back in the original direction—1981's For Your Eyes Only or the aforementioned License to Kill—the results were deemed dry and the box office dipped. Then, in his next outing, the superhuman Bond would predictably return to usher in more high-tech silliness. And so the formula was cemented into place.

The Bond films descended into silliness in the '70s, including this scene from Moonraker

Audiences, meanwhile, may have been dealing with more than a simple desire to see good defeat evil. Spiritual weariness left them longing for simplicity and escape, not complexity or the understanding that grew out of it. They wanted bigger-than-life protagonists who didn't trouble much with morality, who beat out clearly defined bad guys, and got all the pleasure (read: sex) they wanted along the way.

In that way the Bond franchise acted almost as a spiritual anesthetic, keeping viewers from looking too deeply at issues which didn't always respond to guns, and from looking too far inward at their own sin. Bond thus became a prisoner of his own success: an action figure through whom the viewer might live out his fantasies while avoiding the realities of the consequences of his choices.

But the pendulum now seems to be moving in the other direction. Audiences are shifting away from irresponsibility and fancy and back toward the more intense, more nuanced (and thus ultimately more satisfying) hero. Witness the success of Batman Begins several months ago, the movie which replaced the Caped Crusader with the Dark Knight, deepening him in the process and doing away with the campy adventurer we'd all come to loathe. Critics loved it, and more importantly to the studios, it made a ton of money. Witness the success of Revenge of the Sith, the darkest of all the Star Wars films—and a movie in which we actually felt sorry for the villain, as we watched Anakin's agonizing descent into darkness en route to becoming the evil Darth Vader. And witness the success of savvy spy films like the Bourne Identity and the Bourne Supremacy, and the comparative failure of "action hero" offerings like The Chronicles of Riddick and XXX: State of the Union.

Perhaps audiences are ready for a more realistic Bond after all.

Upon learning that he was the new 007, Daniel Craig called Bond an iconic figure, and said playing him would be the adventure of a lifetime. Yet, he added, the movies had become far more "about gadgets than feelings," and he looked forward to effecting a change. Good words.

So, we Bond fans can be hopeful, even cautiously optimistic. Thirty-five years of institutionalized, over-the-top silliness won't be easy to overcome, and the small amount of momentum generated by Brosnan's recent great performances will almost certainly be lost (along with the actor that came closer than anyone save Connery to actually, definitively nailing the character).

There will always be the temptation to play Bond broadly, have him win the world and the girl with ease, and whip out the latest gizmo from "Q" when things look bad. But if we can take the producers at their word, they see both the problem—and the changed marketplace—as clearly as we do. They're as anxious for change as we are. And they have in their possession one of the most dynamic and fascinating fictional characters ever fashioned.

They should be able to take that character back to his roots: back to the glory days … when nobody did it better.

Frank Smith is a writer who lives with his wife and two children in Charlottesville, Virginia.

1 of 5
Daniel Craig as the new 007The diabolical Ernst Stavros BlofeldBond, played here by George Lazenby, was once married to Countess Tracy Di Vicenzo (Diana Rigg)Sean Connery's interest began to wane after a whileThe Bond films descended into silliness in the '70s, including this scene from Moonraker