"Am I digging my own grave?" young Saigo wonders as he helps his fellow Japanese soldiers shovel out bunkers in the dark sand beneath Mt. Surabachi. And because we know the outcome of the Battle of Iwo Jima, we can make an educated guess at the answer to his question.

In an unprecedented work of ambition and vision, Clint Eastwood has released two films in one year about that historic battle: Flags of Our Fathers, which illustrates the American experience of the conflict, and now Letters from Iwo Jima, which draws us into the experience of the outnumbered, ill-equipped Japanese defeated in that battle in 1945.

The two films, produced with lifelike intensity and meticulous attention to period detail, mirror each other with subtlety and cleverness.

Flags asks us to reconsider American notions of heroism. Letters asks us to assess the Japanese concept of dignity, even confronting us with the grisly reality of the soldiers' suicide tactics, which they carry out in the name of "honor." (Watch out—the combat scenes are extravagantly bloody.)

Flags shows us the incongruity between the images of glorious heroism delivered to the American public, and the nightmares of battlefield reality. Letters shows a similar disconnect, as Japanese soldiers collapse in hopelessness while inspirational radio broadcasts from the homeland convey confidence of victory.

Flags shows U.S. authorities "revising" stories from the front lines in order to inspire the American people. Letters portrays soldiers who write letters home, only to see censors clip out anything judged "unpatriotic."

Both films show us soldiers who behave with dignity, and others who become barbaric on the battlefield.

But Letters from Iwo Jima is distinguished by something rarely ... 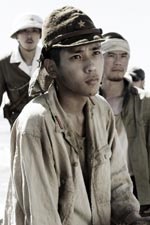