Many years ago (okay, many, many years ago), Socrates was talking to a friend, Aristippus, who was advocating self-gratification as the path to a happy life. Socrates was unconvinced by his friend's claims and countered with a story called The Choice of Heracles, which he attributed to the earlier sophist Prodicus.

In the story, the demi-god Heracles enters adulthood and comes to a crossroads. Two women join him there, each urging him to take one of the opposing paths. One of the women is fashionable and cheery and runs ahead on the easy road of self-gratification, encouraging Heracles to spend life doing precisely what he wants, deliberating only about the best means to do this with as little effort as possible. Her friends call her happiness; her enemies call her vice (or pleasure).

Will Smith and his real-life son, Jaden, are the co-stars

The second woman is sober and reserved, perhaps a bit frumpy. She appeals via her words more than by her appearance. She warns that the initial appeal of vice and pleasure eventually fade into nothing worth having; it certainly doesn't lead to a happy life. But the second woman's road, fraught with work and self-denial though it may be, is the way to achievement and respect and a truly happy life. Her name? Virtue.

The Choice of Heracles has provided much fodder for western artists in the years since it was first told. And in some ways, Will Smith's latest movie, The Pursuit of Happyness, can be seen as part of this conversation. What hath the Prince of Bel-Air to do with Athens, you ask? Bear with me.

The Pursuit of Happyness tells the mostly true story of Chris Gardner (Smith), a San Francisco salesman of high-density bones scanners. With high hopes and the knowledge he would be the only Bay-area distributor, he spent his life savings buying the devices only for the industry to find them an unnecessary expense. He lugs a machine—which looks like a large sewing machine in its case, or perhaps a time machine, depending on your perspective—from hospital to hospital with little sales success.

This life is a hard one. And Gardner's wife, Linda (Thandie Newton) is dissolving under its pressures. Together this couple is at sort of crossroads. And is there not a certain solace to be found in bitterness and anger? These are the pleasures to which she selfishly flees, as she leaves the marriage. Chris is left alone to care for their young son (played by Jaden Smith, the real-life son of Will Smith and his wife, actress Jada Pinkett Smith). A faded and forgotten plaque sits mockingly in the entryway to their home, "With Joy We Greet You."

With doomed precision, Gardner's life falls apart. Taxes, overdue parking tickets, unpaid rent, eviction from their apartment. The details are important in this story if we are ever going to buy into the outlandish hope that presents itself on the horizon—an unpaid internship with a tiny chance for a job with a big salary. And of course, he goes for it.

Chris frets about the future … and his son

As Gardner says via voiceover at one point, "This part of my life is called running." And the pursuit in The Pursuit of Happyness often plays out in a quite literal manner—with Chris running to catch the bus or to recover a stolen bone density scanner (if you ask me, one of the thieves looks suspiciously like Rebecca St. James in hippie garb), or to make a meeting. He is running against the odds. And his efforts embody certain modern American virtues like dogged determination and idealism and hope.

In many ways, this movie is perfect for our economic moment—a time when "getting ahead" seems less and less plausible and more and more people feel the nip of creditors at their heels. With the middle class squeeze, the line between making it and poverty is increasingly thin. A prolonged illness. A lost job. Unexpected bills. It's not that hard to identify with Chris, so it's uncomfortable to see him and his son sleeping in homeless shelters and bus stations. Still, his determination to be a loving and providing father never wavers.

But as much as the premise of The Pursuit of Happyness sounds like an opportunity to glorify materialism—the hope for the bigwig job that leads to the cool car and the mcmansion—these accouterments of the life Chris is pursuing remain in the shadow of his son. Chris's guiding desire is to take care of him. One can't help but wonder if the fact that both Smith men turn in textured and emotionally resonant performances here is driven to some extent by their own father/son bond. One gets the sense that if this man could provide for his son in a less lucrative way, he would pursue that too. Because that would make him happy. And happiness is indeed what's he's ultimately after. 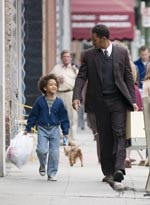 Father and son are on this journey together

So what hath the Prince of Bel-Air to do with Athens you ask? Let's go back to Prodicus, that fifth century BC philosopher who brought us The Choice of Heracles. Prodicus made his mark with this story by being one of the first philosophers to explicitly claim that we are all pursuing happiness—that this is the hoped-for destination on everyone's road, whether you choose vice or virtue. Moreover, he emphasized the idea of choice.

As Julia Annas neatly summarizes in her A Very Short Introduction to Ancient Philosophy (Oxford), "You can't have it all; you can't go through life gratifying your desires and still hope to achieve anything worthwhile or to live a life that you or others can respect. Recognizing explicitly that your aim in life is happiness, brings with it the realization that you have to reflect on and order your life in one way rather than another. Life presents you with alternatives; you have to make decisions."

Chris and Linda made different decisions. We don't know how her story turned out. We have a better idea of how his story turned out. But even at that, the story is open-ended, much like The Choice of Heracles. Both stories are less about the constitution of vice and virtue—and more about exploring the aims of and one's attitude towards life. Bel Air and Athens. Who would have thought?

The film is rated PG-13 "for language," but the language is mild and almost would have passed for a PG.

from Film Forum, 12/21/06
The Pursuit of Happyness is based on the true story of Chris Gardner, who fought hard to save his family from poverty in the early '80s. And it stars Will Smith and his son Jaden Christopher Syre Smith as, of course, a father and son. Their chemistry, and the film's story of determination and devotion, are inspiring audiences and critics alike.

But how is the movie? Does Will Smith's performance live up to the hype? Is it well made?

Jenn Wright (Past the Popcorn) says, "In my opinion, there should be a new Oscar awarded beginning this year—one for the best acting partnership. Will and Jaden shine individually in this film, but the strength of the movie definitely comes from their teamwork. Without being overly sappy, implausible, or overwrought, Happyness offers a sincere story of a man with a dream."

Adam R. Holz (Plugged In) says, "Inspirational isn't a word I would normally choose to describe a great movie, as it conjures up connotations of something sappy or overly sentimental. Nevertheless, I think that's the word that best captures Will Smith's powerful portrayal. … As a new father myself, I'm hard put to think of any movie I've ever seen that inspires me more to be a good dad than this one does. Days after seeing it, memories of certain scenes continue to challenge me in my own occasional moments of laziness or self-absorption."

Harry Forbes (Catholic News Service) says, "Though overly long and occasionally repetitive in showing the succession of hard knocks Chris must endure, there's a lump-in-the-throat payoff. … The movie scores high on the inspirational message scale. … And, in case you were wondering, the movie does not promote illiteracy. That misspelling of 'happiness' is intentional and has a dramatic point."

"There are many reasons to love a good father/son movie," says Stephen McGarvey (Crosswalk). "Fathers so often get the shaft in pop culture and on the big screen. The Pursuit of Happyness … not only gives us a strong portrayal of a loving father, but an uplifting lesson in perseverance and being happy even when life is rough."

Scott Gurley (Relevant) says, "It would be easy to gloss over [the film] as a formulaic, feel-good movie, nicely packaged by Hollywood for the holiday season. … However, amidst skillfully crafted sequences—designed to keep audiences from ever feeling too sad—is a remarkable story …."

He adds, however, "The movie falls short in its depiction of Gardner and his son's experience among the homeless. Surely the film's target audience is families, hence a more lighthearted look at homeless culture. However, an important element of reality is lost when the grittier parts of life are made to look decent."

1 of 4
Will Smith and his real-life son, Jaden, are the co-starsThandie Newton as Linda, Chris's wifeFather and son are on this journey together