Scripture doesn't say much about Joseph, except that he was "righteous." Oscar Isaac, who plays that role in The Nativity Story, had to figure out what that might have looked like in everyday life.
by Mark Moring |November 21, 2006

Oscar Isaac has a winning smile, an easy laugh, and seems like the kind of guy who'd be fun to hang around. But for a few months earlier this year, Isaac was as serious as he could be, trying to figure out how to best portray a man that the Bible tells us very little about—Joseph, descendant of David, husband of the Virgin Mary, and earthly father to a child who was the Son of God.

Isaac, a 2005 Julliard graduate, is the leading man for The Nativity Story, which fleshes out Joseph's character in more depth and detail than any Bible movie before it. The film, opening December 1 in theaters worldwide, also features former Oscar nominee Keisha Castle-Hughes (Whale Rider) as Mary.

The Bible doesn't tell us much about Joseph other than the fact that he was a "righteous" man, but screenwriter Mike Rich and director Catherine Hardwicke took that one adjective and ran with it, developing a character who demonstrates that quality in both subtle and powerful ways at every turn.

Isaac says he was so focused on the role that he didn't stray too far from being "in character" during in his time on the set. His earnestness and diligence pays off; viewers will get to "know" Joseph more than ever before in what plays out as a bit of a non-traditional love story on the big screen.

We recently interviewed Isaac in Los Angeles during a press trip for The Nativity Story. The conversation below includes segments from our one-on-one interview, as well as segments from a roundtable discussion Isaac held with several members of the media.

Why did you want to play this role?

Oscar Isaac: One, I wanted to work! But the truth is, what a cool, strange, intense role to play, and one that's ... 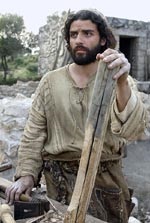