Veteran Hollywood producer Ken Wales has long wanted to bring the story of John Newton to the big screen. He intended to call it Amazing Grace, titled after the classic hymn penned by Newton, a former slave trader who had undergone a radical conversion to Christianity.

Wales thought Newton's story should come first, since it was Newton who eventually mentored the young Wilberforce. But Anschutz didn't bite. He wanted Wilberforce—and got it.

Wales got to keep his title, Amazing Grace, but the film is Wilberforce's story—with Newton playing a major role. The film, a Bristol Bay Production, opens Friday—exactly 200 years to the day since the abolitionist convinced the British parliament to pass a bill banning the nation's slave trade.

A devout Christian, Wales, 68, counts the likes of Anschutz and Julie Andrews and even Billy Graham among his good friends. He produced 1978's Revenge of the Pink Panther with Andrews' husband, Blake Edwards, and he brought the popular Christy series (starring Kellie Martin) to CBS in 1994.

We recently sat down with Wales to discuss Amazing ... 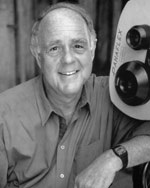