Our annual best-of coverage winds down again with some quick picks for Best Artists, drawing your attention to some of the industry's best vocal performances from the past year, as well as the most impressive bands and gifted solo artists. We've also added a new category that recognizes the artists we feel have shown the most improvement in 2006. The finalists are a mix of veterans and newcomers, some that you would expect and some that may surprise you.

It's no secret that all of us at Christian Music Today are in love with this woman's voice, enough to place her indie release Before the Daylight's Shot among our Best Albums of 2006. In turn, that album is strong enough for Ashley Cleveland to top our list of the year's Best Female Vocalists. Most say she sounds similar to Melissa Etheridge, but that's oversimplifying. Cleveland is actually far more versatile than blues, rocking with the best of them before backing off for tender delivery on the next track. She doesn't just sing—she emotes all the way through.

For the record, we're not honoring Kathy Troccoli just to recognize her 25th anniversary as a recording artist this year, though that makes it all the more appropriate. Have you heard her latest, The Story of Love? It's easily one of the best albums in her illustrious career, and a throwback to classic inspirational pop albums of the '80s (in a good way). Troccoli has seemingly discovered newfound freedom with her KT Records imprint, allowing her to dabble with jazz as much as pop—think Twila Paris meets Ella Fitzgerald. As a result, she sounds like she's enjoying her work more than ever. We are too. 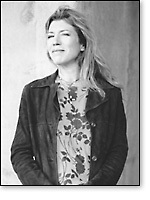