Steven Curtis Chapman and other industry insiders weigh in on the future of the compact disc in a digital music culture. Part 3 of a 3-part series.
Mark GeilSeptember 17, 2007

In last week's Part Two of this series, we looked at the growth and volatile future of Internet radio, including the rise of podcasting.  Today, in Part Three, the final part of this series, we examine a question many are asking: Does all this mean the death of the CD?

I have buyer's remorse. I only spent five dollars, but I still feel guilty.

I recently bought a "digital album"—a live EP, exclusively on iTunes, and I did get six songs for my five bucks, a pretty good deal. Trouble is, I've got nothing to show for it. They're on my iPod, and my computer, and I could burn them onto one of those insipid blank CD-R discs which I would probably forget to label, but I can't get over a very basic deficiency: I'll never be able to pull out the booklet, ponder the lyrics, read the liner notes, and round out my music experience.

I miss the tangible things.

In July, a small story in TheNew York Times included this not-so-surprising headline: "Digital Purchases Rise as Album Sales Fall." In the first half of 2007, almost 230 million albums were sold in the United States, according to Nielsen SoundScan. That seems like a large number, but it's down 15 percent from last year, and is dwarfed by the sales of digital tracks (single songs) during the same period: 417 million.

So now, in a day when more people are downloading individual songs rather than buying whole albums, a big question looms: Will music stores soon be extinct, because we're soon coming to a day when music only exists online?

Phrased another way: Does this mean the death of the CD?

Kevin Peterson, Christian Editor for Radio and Records, thinks so: "Just like vinyl records, 8-track tapes and cassettes, I'm sure the day will come when CD's will no longer be pressed."

Join in on Facebook
Tags:
None
Posted:
September 17, 2007
More From:
Mark Geil 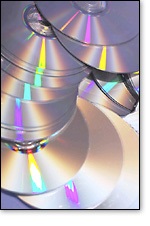