Holiday movies don't often depict the real Christmas story, but when they do, it's a light shining in the darkness.
Jeffrey Overstreet|December 16, 2008

As a kid, I looked forward to Christmas movies and television programs as much as most people look forward to the holiday parties, cookies, or the stuff in their stockings.

I particularly liked the whimsical animated programs like The Year Without a Santa Claus (with its frightful Heat Miser) and Rudolph the Red-Nosed Reindeer (with its fearsome Abominable Snowman). The family all gathered around for that Muppet Christmas special with John Denver, and we never missed A Charlie Brown Christmas. That crazy cartoon still brings tears of joy to my eyes.

There were movies too, but they were on too late and I wasn't allowed to stay up to see how they ended. So, for The Sound of Music, I didn't learn about Liesl's Nazi boyfriend or the family's frantic escape until I was a teenager. But the sound of Julie Andrews singing "My Favorite Things" became as familiar as any Christmas carol. Other movies that often aired during the holidays included The Ten Commandments, It's a Wonderful Life, Miracle on 34th Street, and every so often, a new version of Charles Dickens' A Christmas Carol.

But as years went by, I became more and more puzzled about the absence of the Nativity story. Only two TV programs—The Little Drummer Boy and A Charlie Brown Christmas—bothered to acknowledge the baby born in the manger. There were no movies about it. What was the problem? Weren't the marvels, the mayhem, and the miracle of that "midnight clear" a fantastic subject for a Christmas movie? 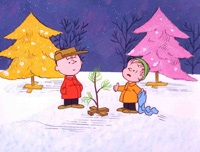