This graphic—perhaps too much so—depiction of a real event raises awareness about the injustice that women still face in many parts of the world.
Camerin Courtney|June 26, 2009
Our Rating

What do you do in the face of injustice toward another? Do you immediately look away, not wanting to see or hear because it's too uncomfortable? Do you observe the injustice, silently thank God it's not impacting you, then proceed as usual? Do you speak out against the wrongdoing? Do you fight the injustice lawfully? Unlawfully?

This is a question nearly all the main characters in The Stoning of Soraya M. have to grapple with at some point in the film. How they respond is at turns unthinkable, disappointing, relatable, and inspiring.

The Stoning exists thanks to the response of one person in this inspired-by-true-events story, a man who happened into this disturbing scenario quite by mistake. In the late 1980s, French-Iranian journalist Freidoune Sahebjam (James Caviezel) got stranded in a remote Iranian village when his car broke down. While waiting for repairs, he was approached by Zahra (Shohreh Aghdashloo), a local woman insistent on telling him a story about a recent local conspiracy.

"Voices of women do not matter here," Zahra explained, "I want you to take my voice with you." (Which he eventually did via the 1990 international bestselling book The Stoning of Soraya M., upon which this movie is based.)

Skeptical, Freidoune got out his tape recorder, pressed play, and listened as Zahra shared about her niece Soraya (Mozhan Marno). Soraya was married for 20 years to an abusive man, Ali (Navid Negahban), who wanted out of their marriage so he could wed a 14-year-old girl. If he requested a divorce for such reasons, Ali would have to pay support to his wife and two daughters (he planned to take their two sons with him). But, if he found another way out of the marriage, he would be free to do as he pleased without the financial ... 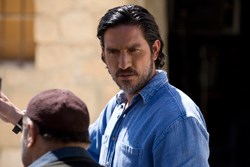