The man who is the voice of God and the incarnation of Screwtape.
Mark Moring|March 20, 2009

Several times a week, Max McLean does something that most would want to avoid—forever.

He goes to hell. On purpose. And he has a devil of a good time doing it.

McLean, you see, is the eponymous star of The Screwtape Letters, a stage adaptation of C. S. Lewis's classic that has played to sold-out audiences over the last year and wowed critics in New York, Washington, D.C., and, most recently, Chicago.

For the part, McLean slicks back his silvery hair, dons a colorful smoking jacket, and—from a stage short on props but clearly representing a corner of the underworld—becomes a demon. Specifically, as Lewis put it, "His Abysmal Sublimity Screwtape, Under Secretary of the Satanic Lowerarchy." For 90 minutes, McLean dictates—with precise articulation to his wordless assistant, Toadpipe—those infamous instructional letters addressed to his nephew, Wormwood, a junior demon who is trying to lead his "patient," a new Christian, into temptation.

Lewis wrote that composing Screwtape had been a daunting task: "I never wrote with less enjoyment. … The strain produced a sort of spiritual cramp. The world into which I had to project myself while I spoke through Screwtape was all dust, grit, thirst, and itch. Every trace of beauty, freshness, and geniality had to be excluded. It almost smothered me before I was done."

McLean understands why Lewis, as the author, would feel that way. But as an actor, McLean feels nothing of the sort when he morphs into the character.

"It's really fun to play," he says with almost as much relish as when he's on stage. "I hate to admit it, but it really is. It's part Noel Coward, part Hannibal Lecter, part Iago in Shakespeare's ... 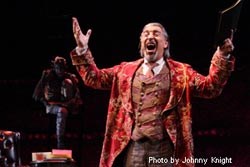