Steven Curtis Chapman opens up about losing his daughter, their family's arduous journey, and a new album of songs chronicling the path of pain and hope.
Interview by Mark Moring|November 2, 2009

It's been a year and a half since Steven Curtis Chapman lost his youngest daughter, 5-year-old Maria Sue, to a tragic accident at the family's Tennessee home. Maria's death rocked her father's world, causing Steven and his wife, Mary Beth, to question God and their faith, while also clinging to the hope of things to come. The grieving process brought Steven, like King David, to his knees, simultaneously shouting at God while also desperately grasping for hope. Chapman journaled the journey, which he likens to penning his own Psalms—and not surprisingly, many of them turned into songs, and now his first album since Maria's passing, Beauty Will Rise.

Chapman spoke with CT about losing his daughter, the "black hole" of pain and despair, and the glimmers of life they've clung to through the last 18 months—including the opening of Maria's Big House of Hope, a healing home in China for special needs children. The Chapmans had already adopted two Chinese girls before Maria, so returning to China over the summer to open Maria's Big House was a bittersweet time to both mourn Maria yet again, but to celebrate her life and legacy.

I don't think I've ever encountered a piece of art where hope and pain are so beautifully intertwined. You've said it didn't feel so much like making a record, as you were just being David recording your personal psalms.

Yeah, I was hiding out in the valley of the shadow of death, just crying out to God. Man, I've never been so thankful for the Psalms. I'm not sure I really even got the Psalms until I walked through this. Obviously the Psalms were a great comfort before walking through the valley, but all of a sudden, I'm just so thankful for God's honesty to us, to allow us to look into the heart ... 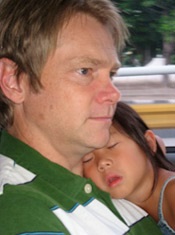