Though it has one of the most impressive casts of action stars ever in a film, the story, scripting, and stunts in this Sylvester Stallone film are all second-rate at best.
Russ Breimeier|August 16, 2010
Our Rating

There's a fun scene early on in The Expendables where director and action movie legend Sylvester Stallone has a conversation with fellow superstars Bruce Willis and Arnold Schwarzenegger. Given that these three action icons were also once in business together as co-founders of the Planet Hollywood restaurant chain, it's a treat to see the trio trading macho barbs together on screen for the first time; the funniest line of the movie comes in response to Schwarzenegger's exit.

The scene is short-lived though, and Stallone's two buddies never appear onscreen again after that three-minute cameo. Of course, The Expendables boasts plenty of other action stars: Jason Statham, Jet Li, Dolph Lundgren, Mickey Rourke, football star Terry Crews, and pro wrestlers "Stone Cold" Steve Austin and Randy Couture. With the notable exceptions of Jean-Claude Van Damme, Steven Segal, and Chuck Norris, the movie is a veritable Who's Who of top action heroes from the past 30 years.

Unfortunately, there's not much to The Expendables beyond its gimmicky casting. The story is little more than an R-rated version of The A-Team and The Dirty Dozen, and the overall quality is closer to a direct-to-DVD release than a summer movie blockbuster.

The film features a specialized team of mercenaries sent to do covert missions that the U.S. government is afraid to touch. At the start of the movie, they're rescuing the crew of a cargo freighter held hostage by terrorist-pirates at sea. But with Barney Ross (Stallone), Lee Christmas (Statham), and company armed to the teeth, the baddies don't stand a chance. 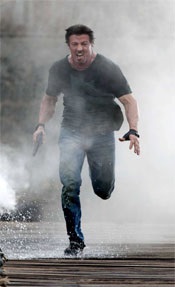