Nearly 25 years after the original, this worthy sequel does well in building suspense and intrigue, but ultimately settles into predictable action and violence.
Russ Breimeier|July 9, 2010
Our Rating

The less you know about Predators going in, the better. That's assuming interest—and you know who you are. Fans of Arnold Schwarzenegger's 1987 sci-fi/action hit have been hoping for a worthwhile sequel since, well, that disappointing 1990 sequel with Danny Glover. And the two disappointing Alien vs. Predator films don't really count, failing to do justice to either franchise.

Now, almost 25 years after the original, comes Predators. Surprisingly enough, it's not terrible; it should generally please fans. That's not to say it's perfect, or that it'll appeal to many outside of that fan base. It is still a sequel, after all.

Predators begins with a mixed group of warriors who are literally dropped from the sky into a jungle. It's a veritable who's who of multi-cultural killers: an Israeli sniper, a Mexican drug cartel enforcer, a convicted mass murderer from America, a revolutionary from Africa, a Japanese gangster, a member of the Russian Special Forces, and at the forefront, an icy mercenary named Royce (Adrien Brody) who more or less takes charge for his own survival.

No one knows where they are or remembers how they were brought to this mysterious jungle. And aside from a gawky doctor in their midst (Topher Grace), all are practiced killers. As Royce correctly surmises, they seem to have been chosen based on their "professions." Their purpose: to serve as big game for the Predators, a powerful alien race that thrives on hunting dangerous prey with their arsenal of technological weapons.

Fans of the original can guess where it goes from there as the unwitting band of combatants is picked off one by one a la Ten Little Indians. However, Predators does offer several surprising revelations. Perhaps too many—one at ... 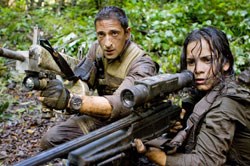