In a riveting new HBO documentary, a prize-winning American journalist helps us see what makes these terrorists tick—and what ticks them off.
Mark Moring|September 7, 2010

Why do they hate us?

That's a question many Americans have been asking about radical Muslims ever since al-Qaeda terrorists hijacked four jetliners and attacked our nation nine years ago.

Lawrence Wright, a staff writer for The New Yorker, often asked that same question while researching his book, The Looming Tower: al-Qaeda and the Road to 9/11. The book alone, which won a Pulitzer Prize is informative enough and goes a long way toward providing some answers (we'll never have them all). But Wright took things a step further by turning his material into a critically-acclaimed one-man play, My Trip to al-Qaeda. And now his material shows up in yet another form of media—a movie by the same title which features snippets from Wright's stage play, interviews, documentary footage, photographs, and more.

My Trip to al-Qaeda debuts on HBO tonight, and will run on HBO and HBO2 throughout the month (and on demand into early October). It's one of the most compelling things I've seen this year, and certainly one of the most educational 90 minutes you'll get on the topic. You might not learn all the reasons they hate us, but you'll learn quite a bit about the roots of al-Qaeda, Islamic radicalism, and hostility to America.

Wright's interviews include a terrorist who killed a 12-year-old girl while trying to assassinate the Egyptian prime minister; a once-jailed Muslim who describes the torture techniques that turned Islamic intellectuals many into radicals; and a Saudi businessman who was married to Osama bin Laden's sister.

We caught up with Wright via e-mail recently to discuss the film, what he learned from his research, and why he thinks radical Muslims hold so much hatred for the West. 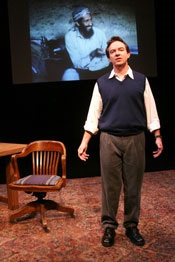