Mira Sorvino has played all sorts of roles in almost two decades as an actress—everything from a prostitute in an Oscar-winning performance in 1995's Mighty Aphrodite to a brilliant entomologist in the horror flick Mimic, from a ditzy blonde in the hilarious Romy and Michele's High School Reunion to a convincing turn as Marilyn Monroe in a made-for-TV biopic.

But her most recent role, as an abused wife trying to make better choices in Like Dandelion Dust, has been by far her most challenging, she tells CT. The film, based on the novel of the same title by Christian author Karen Kingsbury, opens in limited release this Friday.

Sorvino, 42, plays the role of Wendy, whose husband Rip (Barry Pepper) is serving seven years in prison for domestic abuse. When he's released, Wendy tells Rip that she learned she was pregnant soon after he entered jail, and that she decided to give up the baby, a boy, for adoption. Rip decides he wants custody—and is granted just that by a court ruling, meaning that the boy, the now six-year-old Joey, will be torn from his adoptive parents (Cole Hauser and Kate Levering), the only mom and dad he's ever known. It's a heart-rending story in which there are no real heroes or villains, just a handful of ordinary people trying to do the right thing—for themselves, and especially for Joey.

A Christian herself, Sorvino says it's a tale rife with biblical themes—confession, forgiveness, redemption, unconditional love … and a very clear nod to the passage about Solomon's judgment about the fate of the baby claimed by two mothers (1 Kings 3:16-28). Solomon ordered the child to be cut in half with a sword, forcing the real mother to be willing to give up her son so that he might live. ... 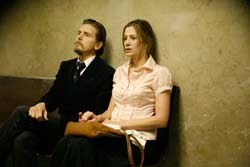