Will Ferrell is locked out of the house with all his stuff, but isn't his typical goofy comedy.
Russ Breimeier| May 13, 2011
Our Rating

Will Ferrell stars as Nick Halsey, an advertising executive who's having a really bad day. Within the first five minutes, he's lost his job of 15 years, sabotaged his childish attempt at payback, and ticked off a thug at the local convenience store during a beer run.

Nick's problems are only just beginning. When he gets home, he finds that his wife has left him, changing the locks on the doors and throwing all of his belongings out on the front lawn: books, albums, clothes, dresser, exercise equipment, a lazy boy chair, a foosball table, a kayak … the stuff that makes up a life. With his bank account frozen and his cell phone service cancelled, Nick is stuck—in more ways than one, as it turns out. He can't break into his house without setting off the alarm system, so what can he do? Why, throw a yard sale, of course!

If it sounds like comedy as usual for Will Ferrell, think again. There are a number of chuckle-worthy moments in the first hour—including the bizarre first sale Nick makes. But this is more of a drama and an opportunity for Ferrell to show quality, understated acting outside of his usual screaming and insanity. You might say Everything Must Go is for Ferrell what Punch Drunk Love was for Adam Sandler, except it's not as good.

The movie is based on Raymond Carver's very short story "Why Don't You Dance?"—adapting it into a 90-minute film must have been like adapting a Dr. Seuss book. But first-time writer/director Dan Rush doesn't recreate and expand on Carver's story as much as borrow the premise of a drunken man recreating his once happy home life on the front lawn via a yard sale.

Carver's short story works as a poetic portrait, its brevity creating a tragic image for readers to dissect ... 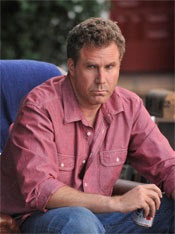