An Unsung Inspiration for the Protestant Reformation: the Ethiopian Church

An Unsung Inspiration for the Protestant Reformation: the Ethiopian Church

For the Reformers, renewing the church was a Pentecost moment tied to the global body of Christ.
Jennifer Powell McNutt

There are some parts of the world that you never expect to see. A few years after the Iron Curtain fell, my parents took me out of school to visit Russia. My dad was taking pastoral study leave and was involved in the missionary outreach foundation of our denomination.

Our first days were spent in Moscow, an austere but extraordinary city that was home to soldiers, beggars, and the Bolshoi Ballet. Our overnight sleeper train from Moscow to St. Petersburg required bodyguards to protect our travel group from train robberies. Tourism was new, so we were some of the first Americans to set foot in the Kremlin and the Hermitage Museum. Statues memorializing past regimes had been toppled and moved. Tour guides were still sorting out the complexities of explaining their past in a fast-changing and sensitive present. We felt exhilarated (and overwhelmed) by the food, the language, and the customs, but most of all, we were drawn to the churches.

Stepping into St. Basil’s Cathedral in St. Petersburg’s Red Square was a lesson in Christian unity and diversity. We three American Presbyterians were surrounded by the familiar and the strange. For the first time, we saw an iconostasis—a screen of icons that divides the sanctuary from the nave—and encountered the stories of Christian faith, suffering, and beauty depicted there. Later in the trip, a visit with an embattled Protestant missionary added layers to my young adult perspective on faith. Through these and other experiences, the Eastern Orthodox branch of the church was making itself known to me in the heart of the “Third Rome,” a moniker used to signify Moscow as the heir of Byzantium (or Eastern Orthodox) Christianity. I began to realize that the church was much bigger and far more complex than I knew.

These years later as a scholar, I see now more than ever how the interconnections of the global body are historical, present, and eschatological all at once.

The Reformation, in particular, gives me a starting point. When the Reformers looked at the Bible, not only did they see the Word of God; they saw the global church. They saw the familial bond that stretches across time, space, and culture. Some Christians minimize the Protestant Reformation based on their perception that Reformers blazed their own trail without regard for the global church or church tradition. But primary sources offer a different story. The Reformers did not view their work in isolation from historical or even contemporary global Christianity. They saw the broader church as right at the heart of their efforts. In fact, one of the main inspirations for the Reformation movement came from somewhere far removed from Geneva and other centers of Protestant thought: the Ethiopian church.

Orthodox Christianity and the Protestant Reformation

As the Protestant Reformation began to unfold, global Christianity was grappling with an unprecedented crisis. At the onset of the 16th century, a little over 90 percent of the world’s Christians were living in Western and Eastern Europe (including Russia). Up until that point, Christianity had thrived as a tricontinental faith, flourishing in Asia, Africa, and Europe. The movement of Christianity’s center of gravity from the East to the West was one of the most troubling consequences of the rise of Islam and the loss of Constantinople (1453).

In 1526, as the conquest continued, Eastern European rulers lost a critical battle to the Ottoman Empire at Mohács. The defeat of King Ludwig II of Hungary and Bohemia left the route to the gates of Vienna open to Turkish armies, and with that the door to central Europe. Early Modern Europeans were living through a rapid geographical shrinking of Christendom just as the Western Church also began to crack. It is not an exaggeration to say that they felt like the world was ending, and the Turks were God’s apocalyptic agents. Nevertheless, the Eastern branches of the Christian church were not far from Protestant minds.

Protestants engaged with both the Eastern Orthodox tradition and Oriental Orthodox traditions in a few consistent ways. To Protestants, it mattered immensely that Eastern branches of the church did not follow the Catholic practices of preaching purgatory, selling indulgences, or observing petrine supremacy. Luther marveled at how the churches of Armenia, Ethiopia, and India had avoided the private masses that developed in the West since Gregory the Great’s time. Luther also regarded it significant that, before there was a “pope,” there were the bishops of Ethiopia, Syria, Antioch, and Rome. The Orthodox branches were a link back to a purer, more apostolic era.

The church of Ethiopia, especially, was mentioned among early modern Christians. Some scholars have noted that Luther mentions Ethiopia at least 85 times in his written works. (It was a common though mistaken belief to view Ethiopia as the first Christian kingdom. That belief was based on a particular reading of Acts 8.) Luther’s esteem only grew after he was visited by Michael the Deacon, an Ethiopian cleric, in 1534. As Daniels explains,

To Luther, “Ethiopia” symbolized the church, and one of the most valued legacies that the Reformers identified within the Ethiopian church was its insistence on maintaining the Bible in the common language.

In an effort to transform the way people experienced worship, the Reformers drew inspiration and precedent from the eastern African church and from the first to the third generations worked diligently to transform the way in which people experienced worship. Imagine going to church in a foreign language, day in and day out, without ever learning the language. It is not a stretch to say that it would have a limited impact on your maturation as a thinking Christian. To the Reformers, then, carving out a place for vernacular language in church worship was essential for hearing and receiving the Gospel. Shifting the language of worship meant transforming liturgy, introducing congregational singing, altering the observance of the sacraments, elevating the sermon, and promoting the reading of Scripture to an oral form. In other words, the Reformation was in many ways a language event, and the global church was right at the center of that event.

When the Reformers looked at the Bible, they saw the global story of the church represented through languages. They rediscovered Greek and also came to learn Hebrew as the first step toward restoring the true gospel. By their own accounts, the Latin language had become a Tower of Babel that could only be overcome by translating the whole of Scripture into vernacular languages. The Reformation was a Pentecost moment in their minds, restoring what God had originally intended for a worldwide church. They wanted to uncover the foundation of Scripture for one main purpose: pastoral ministry.

We see this thinking play out in John Calvin’s commentary on John 19:19–20. There, he gives a theological interpretation for the decision to print Jesus’ name in three different languages: “For it is not probable that this was an ordinary practice,” he writes, “but the Lord showed, by this preparatory arrangement, that the time was now at hand, when the name of his Son should be made known throughout the whole earth.” A multilingual church was in fact the true church.

When the Council of Trent (1545-1563) responded to Protestantism by insisting on the necessity of the Latin Vulgate in worship—something that would not change until Vatican II—the third-generation Reformer (and successor to John Calvin) Theodore Beza turned to the Eastern branches of the church. There, he found a forceful precedent that was both historical and contemporary.

Beza made his case for vernacular Bibles in the preface to the most important French translation of the Bible that was printed in Geneva: the 1588 French Geneva Bible. Its impact on Bibles throughout Europe was tremendous. For Beza, the Bible’s preservation in diverse languages—Greek, Hebrew, Aramaic, Syriac, Ethiopic, and Latin—was a marvelous sign of God’s faithfulness to the church over the centuries. It was material evidence of how God’s power could overcome the machinations of the Devil. Like Luther before him, Beza treated the rediscovery of the original languages of Scripture as a God-ordained transformation for the church.

None of this was touted as a way to disparage the Latin Bible. Beza, in fact, dedicated his entire scholarly career to revising the Latin translation of the Bible. Rather, the diversity of language was a sign of God’s intention to bring salvation to a diversity of people. Beza took care to emphasize that every single person was intended to “hear” God’s speech, no matter their nationality, condition, sex, or age. With this point, Beza meaningfully stressed the inclusion of women and children, and he cited a litany of support from other church fathers.

Which churches were living this out? For Beza, the Western church needed to take a page out of the practices of the Eastern side of Christianity, particularly in Ethiopia, Greece, and the Levant. They were fulfilling Christ’s command to transmit the Good News, and their example was worth emulating.

What did the church of Ethiopia, in particular, have to do with the Reformation? According to Beza, quite a lot. Ethiopia was a model of what it meant for the church to conserve Scripture’s true purpose as God’s Word for all people. Eastern churches were part of the apostolic re-rooting that Western Reformers sought.

The Conservation of Scripture

Even today, the Ethiopian Orthodox Tewahedo Church continues to inspire and compel. Some of the great wonders of our world are surely the church forests of Ethiopia, where faith communities have made a concerted effort to plant and cultivate trees as part of their congregational space. Orthodox Ethiopian theology and forest conservation are proving to be a life-giving pairing in the midst of Ethiopia’s barren landscape. The green circles of church forests that pepper the Ethiopian landscape are a striking marker of the stewardship commitment of the church in a context stripped by agricultural overdevelopment. In fact, without the intervention of the church, the native trees of Ethiopia would be nearly extinct.

In a similar way, the Reformers believed that the church in the West had lost sight of its calling to conserve Scripture. Their solution was to follow the Ethiopian model and translate the gospel for listeners (instead of readers, given the low percentage of literate people) in the worship life of the church. They knew that was how the church would grow and flourish.

When the Reformers looked at the Bible, they saw the vibrancy and diversity of language as a necessary vehicle for communicating God’s speech to the church in all places and times. They saw the unbroken witness of the global church reaching all the way back to Christ and to God’s revelation before Christ. For the Reformers, conserving the Bible in common languages was not only a primary mission of the church but also a reflection of the church itself: one rooted in time and also destined for eternity. 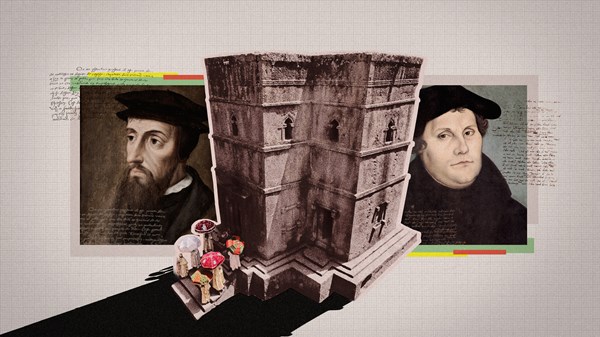 An Unsung Inspiration for the Protestant ...