Getnet’s childhood congregation, St. Michael’s Church, sits atop the hills looking down on the town of Hamusit, five kilometers away from his home. He fondly remembers the dawns as he hurried up the hills to attend Kidasse, the nearly three-hour daily service believed to have originated with the holy apostles nearly 2,000 years ago. Guided by the liturgy that came to be known as the book of Kidasse, priests pray and a deacon guides the people in chants. Ethiopian Orthodox Tewahedo, one of the oldest churches in the world, is highly creedal, using the verbs in the Nicene Creed in the original plural form (“We believe in one God”).

Another strong memory for Getnet: Like his father, the rest of his neighbors had also planted trees in the church compound. Getnet was a nature-loving kid and followed in their footsteps, instructed by the church priests. “We used to plant trees,” he recalls, “and tag our names onto them.”

A theology of forests

Getnet’s childhood church is not unique. Throughout Ethiopia, Orthodox Christian churches can be found in the middle of thick clusters of trees. Even where there are no other trees around, a dense, leafy grove has come to indicate the presence of an Orthodox Tewahedo church. Planting trees is even part of the process of setting up a new church. Though the size of the forests has declined alarmingly across the country, patchy remnants of old-growth forests are still found around most churches.

Centuries before forest conservation became a science, the church was preserving trees out of its theology of creation care. Priests teach that Adam was given a responsibility to take care of what God created for him. They preach that only responsible use of nature, not exploitation, is allowed.

These strong notions of forest conservation and afforestation (adding a stand of trees where there were none) are backed by the church’s creed. Getnet remembers being taught in childhood that the journey from one’s home to church is symbolic of the Israelites’ journey from Egypt to Canaan. The slavery and oppression the Israelites endured in Egypt is emblematic of the harsh realities of sin. The church should evoke Canaan, a blessed place flowing with milk and honey, and thick tree cover should mirror the church’s protection of congregants from a sinful world.

Another creedal reason for conservation lies in the Ethiopian Orthodox belief that angels join humans in praising God during Kidasse. Unseen by humans, the angels are believed to be attracted by the holy ritual, during which they descend from above and find shelter in the church’s forest. These angels are thought to bring both catastrophe and blessing upon people and, as a result, it is customary for adults to prohibit kids from running around outside during Kidasse. 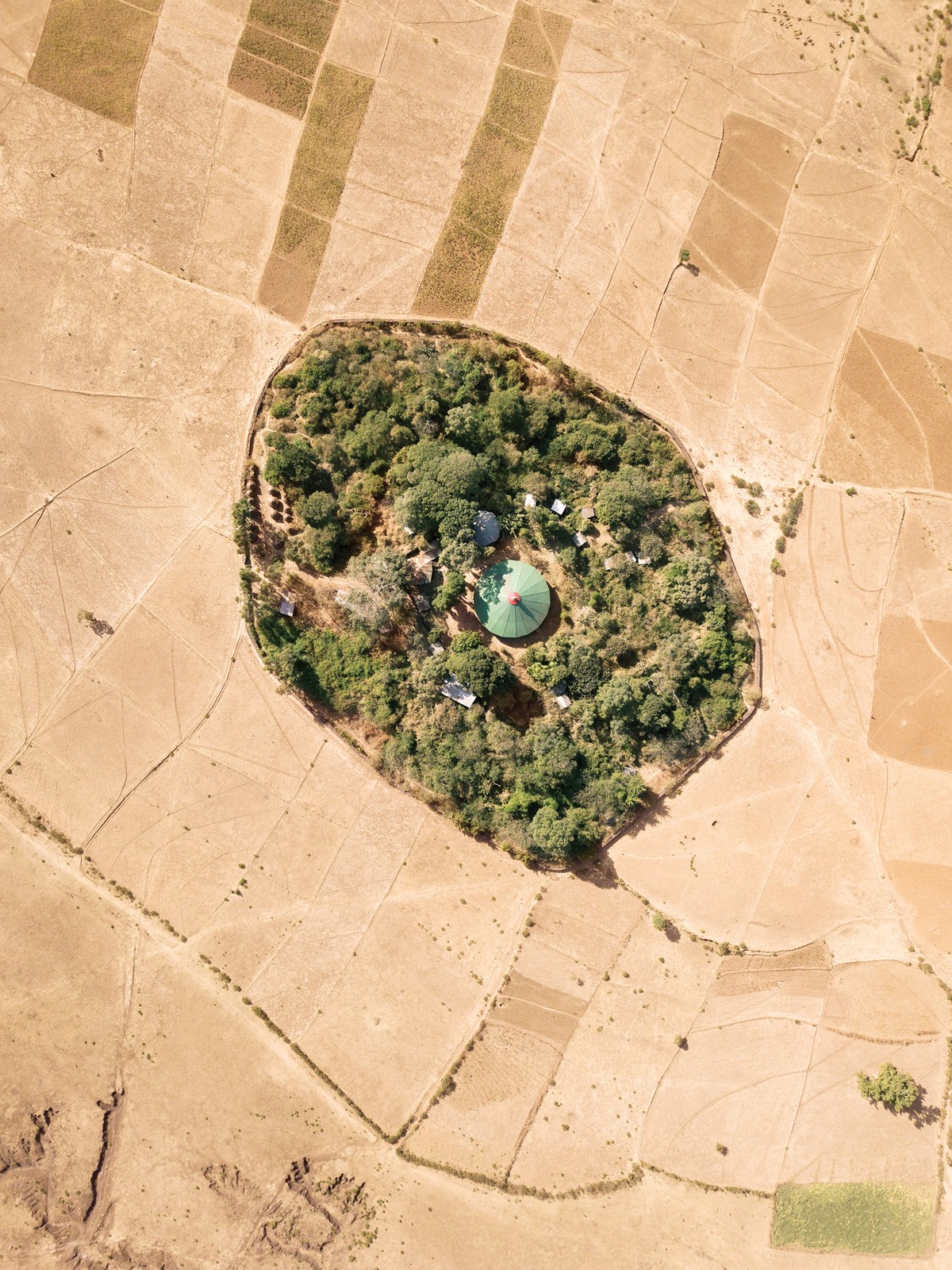 A 2016 study aiming to understand why Ethiopian Christians value forest conservation identified another contributing factor: the Orthodox Tewahedo belief in the importance of the Tabot. A holy object found in all Ethiopian Orthodox Tewahedo churches, the Tabot is believed to be a replica of the original Ark of the Covenant into which the Ten Commandments were placed. A symbol of God’s law, it is placed at the center of each church to represent divine authority.

As the study notes: “The sanctity and divinity of the Tabot is thought to radiate outwards from the church. The proximity of the Tabot dictates the rules of the sacred geography of the entire church compound, including the forest; the closer one is to the church the more divine the space.” Thus, it goes on to explain, “the forest is a form of symbolic protection; it provides respectful ‘cover’ or ‘clothing’ for the church.”

In several interviews, Ethiopian Orthodox priests expressed that a church without trees is like a man without clothing.

An ecology of church forests

From a scientific perspective, Ethiopian church forests offer the usual ecological benefits. They purify the air and sequester carbon, capturing carbon dioxide from the air and, scientists believe, helping to mitigate global warming. They help the soil to clean and retain water. They contribute to pollination and livelihood opportunities, and they nurture diverse species such as gazelles, monkeys, and birds.

Church forests are mostly made up of old-growth trees that have withstood the process of natural selection. But native species have been threatened by the expansion of non-native trees, according to forestry scholar Alemayehu Wassie. With their sprawling root systems, eucalyptus trees, brought to Ethiopia from Australia in the late 19th century, can deplete groundwater supplies and negatively impact soil fertility.

Furthermore, competition over forest land—for food, fuel, and forest biproducts—has led to overexploitation and compromised sustainability. Studies show that Ethiopia’s estimated forest coverage, which was around 40 percent in the early 1900s, has dived to 4 percent today. Many argue that if not for the efforts of churches, that number would be even lower.

“Especially in the northern part of Ethiopia,” says ecologist Birhanu Belay, “when you see patches of trees, you know that there is a church in the middle.” Despite its limited manpower and finances, Birhanu says, the church has played an important role against deforestation. The church controls much of the surviving native forest in Ethiopia, so ecologists and researchers like Birhanu collect most of their samples from church properties. Governmental and nongovernmental actors also regularly seek the help of churches in educating citizens to be mindful of the environment.

What happened to the forest?

Today, Getnet is pilot project manager at Plant with Purpose, a US-based Christian organization that aims to improve the quality of life for people in poverty-stricken areas. It began working in Ethiopia in 2018. Getnet, who earned his university degree in wildlife and ecotourism management, spent several years promoting conservation of church forests, including with an Orthodox Christian nonprofit, Mahibere Kidusan, in Bahir Dar.

Getnet agrees with many scholars that at least one reason for the gradual shrinking of church forests is poverty. People grasping for survival have viewed church forests as an encroachment on farming, grazing, and other purposes. In rural Ethiopia, where 85 percent of Ethiopians live, property lines are mostly not formally demarcated. As the population has grown well over 100 million, farmland that parents allocate to their children is being divided into increasingly smaller plots among more siblings, and communal grazing lands are becoming overtaxed. All of this puts more pressure on church lands, which also lack formal boundaries and are vulnerable to growing exploitation. 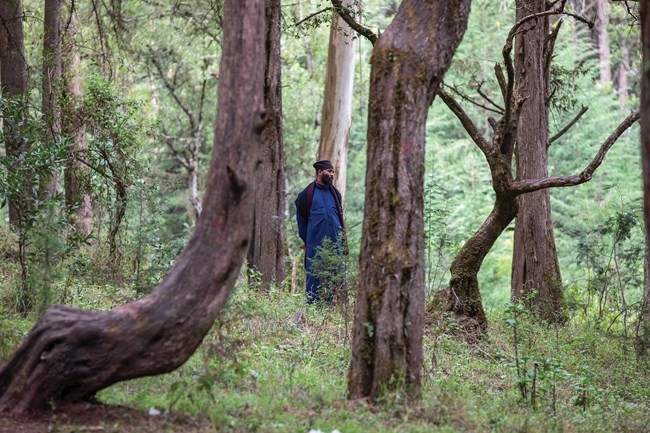 Despite their history of protecting and caring for trees, churches lack access to the increased human and financial resources necessary to reverse the impacts of deforestation. Getnet contends that the church has been mainly engaged in preventing deforestation of existing trees, but that holistic conservation will require planting new seedlings as well.

Starting slowly, Plant with Purpose is equipping churches in Gondar with their own tree nurseries. The goal is to help churches plant trees on their property and to equip them to sell seedlings to the community and put the revenue toward church expenses. Getnet’s organization collected baseline data in hopes of measuring the impact of its programs on environmental restoration and poverty alleviation in the future.

In addition to the tradition of Orthodox Tewahedo churches, political will is gaining momentum. This summer, Ethiopia planned to plant four billion saplings. Given their influence, churches may become the hubs from which the nation’s forest cover expands. While the youth continue to join the long tradition of planting trees around churches, many indicate that they do so without even understanding the theology behind the action. But that doesn’t make reforesting a nation—covering all of Ethiopia with the arboreal symbol of Canaan’s blessing—any less of a Christian act.

Amir Aman Kiyaro is a writer working in government relations in Addis Ababa.