William Tyndale studied at Oxford and Cambridge. He could speak seven languages and was proficient in Hebrew and Greek. He was a priest whose intellectual gifts and disciplined life could have taken him a long way in the church, had he not had one compulsion: to teach English men and women the good news of justification by faith.

Tyndale had discovered the freedom and joy of this doctrine when he read Erasmus’s Greek edition of the New Testament. What better way to share this message with English men and women than to put an English copy of the New Testament into their hands? This was not a passing fancy but became Tyndale’s life passion, aptly expressed by his mentor, Erasmus, in the preface to his Greek New Testament: “Christ desires his mysteries to be published abroad as widely as possible. I would that [the Gospels and the epistles of Paul] were translated into all languages, of all Christian people, and that they might be read and known.”

It would be a passion, though, for which Tyndale would pay dearly.

He began decently and in order: in 1523, he sought permission and funds from the bishop of London to translate the New Testament. The bishop’s answer was no, a telling no. Further queries in England convinced Tyndale that the project would not be welcomed by authorities anywhere in his land. So he left England for the free cities of Europe—Hamburg, Wittenberg, Cologne, Worms, and Antwerp—some place where he could translate and publish an English Bible.

From the Lutheran city of Worms, in 1525, his New Testament emerged—the first translation from Greek into English. It was quickly smuggled into England, where it received a less-than-enthusiastic response from the authorities. King Henry VIII, Cardinal Wolsey, ...

BibleBible TranslationFaith and PracticeHeresyInternationalMartyrdomNew TestamentPersecutionTyndale House Publishers
Issue 43: How We Got Our Bible, Canon to King James, 1994
Previous Article
Reading a Banned Book

Next Article
The Difference a Translation Makes 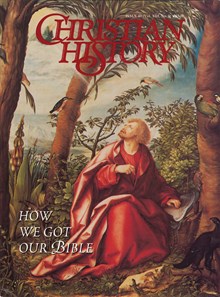