Visions of eternity just aren't what they used to be.
Jeffrey Burton Russell

The modern image of heaven—clouds, harps, and a perpetual Sunday service—is hardly inspiring. Even hell sounds like an improvement. It may be fiery and dark, but interesting people live there, and at least the demons have some fun.

Such views would have seemed ludicrous to Christians in Dante's day. Dante and his contemporaries had inherited rich images of heaven and hell from the Bible, early Christian writings, and the great imaginations of the Middle Ages. These shifting images reflect both the enormous range of human creativity and our ultimate inability to grasp what only God understands.

The Old Testament focuses on the covenant (contract) between the Lord and the community: the people of Israel. For the Hebrews, salvation involved the whole community, not just the individual. As an extension of this community experience, the Hebrews identified heaven with the City of Jerusalem.

The prophet Zechariah proclaimed that Jerusalem was the center of Israel now and in the future: "This is what the Lord says: 'I will return to Zion and dwell in Jerusalem' " (Zech. 8:3). There the resurrection and judgment will take place, and the Messiah will bring the Kingdom of God to earth with the return of the people of Israel to the Promised Land.

The New Testament epistles and gospels say little about the celestial realm. The Book of Revelation contains the most descriptive treatment ... 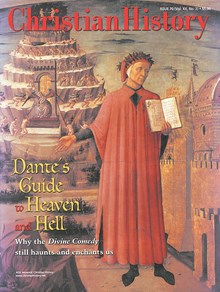 This article is from Issue 70 of the Christian History archive.