Ayyad, 26, was kidnapped at 4:30 p.m. Saturday as he closed The Teacher's Bookshop, which is operated by the Palestinian Bible Society and located in a central part of Gaza City. No one has claimed responsibility. But Ayyad had received regular death threats for his work as the public face of the bookshop.

The interior ministry of Hamas, the ruling power in Gaza since the June ouster of its political rival Fatah, has issued a statement condemning the murder, the Associated Press reports. An AP story said Hamas has launched an investigation. 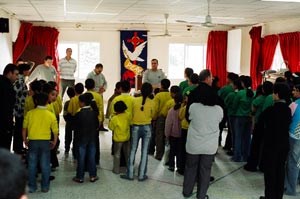 On Friday, October 5, Ayyad noticed a car lacking license plates following him, according to a Palestinian Bible Society press release. On Saturday at 6 p.m. Ayyad phoned his wife that he had been kidnapped by a group of people right after he had closed the bookstore. Ayyad told his wife that he would return home late that evening. Ayyad placed a second call with a similar message to someone else. At that time, a Bible Society official reported the incident to police in Gaza City.

According to a Reuters report:

Ayyad's mother, Anisa, said her son had telephoned his family after he was seized. "He said he was going to be with the 'people' for another two hours and that if he was not back (by then), he would not be returning for a long, long time," she said.

At 6:25 a.m. Sunday October 7, Ayyad's body was found near the bookshop. "Signs of bullets and knife stabs could be clearly seen on his body," the Bible Society release said. Unconfirmed reports added that his head had been severely injured.

On April 15, a bomb destroyed much of the shop's downstairs storefront, but no people were injured in that attack. On February 3, 2006, local militants detonated two small pipe bombs, destroying the shop's doors. Following that assault, the Christian bookshop's workers found a communiqué demanding the shop close immediately.

Gazan authorities had no confirmation of who was responsible. A secretive group calling itself "The Sword of Islam" has carried out similar bombings of Internet cafes in Gaza.

At the time of the February attack, many Gazans gathered for a pro-bookshop rally to encourage the Bible Society to reopen the shop. The shop reopened five weeks later.

In addition to offering Bibles and Christian books, the shop, which opened in 1998, offers public computer classes and other educational opportunities to Gaza's 1.4 million people, many of whom are jobless and destitute.

The Bible Society said in its statement:

"The Bible Society in Gaza has received previous threats and vandalism. However, the support from the community has been very well noticed because of the humanitarian role that the Bible Society has been taking the last four years in the strip."

Gaza's dwindling Christian population of under 5,000 remains in shock. For the most part, Palestinian Muslims and Christians have dwelled peacefully together for centuries in this area of the Middle East. 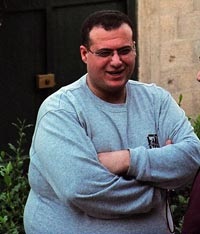 During a phone interview with Christianity Today, a Christian worker who recently left Gaza and asked not to be identified said that Ayyad's death marks the first time in memory that a Palestinian Christian has died for the gospel.

The worker told CT that he believes Ayyad's murder was committed by non-Palestinians likely affiliated with Al Qaeda.

"The long tradition of coexistence between Palestinian Muslims and Christians doesn't mean anything to them," the worker said. "This is a campaign to purge Muslim lands of all 'infidels.' That includes Christians as well as Jews.

"All things work together for good. God has a purpose for letting this happen. It will not silence the church."

On Sunday, the Associated Press reported from the funeral:

"He paid his life for his faith, for his dignity, and the dignity of the Bible and Jesus Christ," said Issa, a 24-year-old Christian who came to pay his respects at Ayyad's home. "I am terrified and cannot believe this has happened in Gaza," said Issa, declining to give his last name because of the tense atmosphere.

Associated Press, The Jerusalem Post, and other news sources have reported on the murder.

Previous stories about Israel and Gaza include:

Fatah Police Seize Gaza Baptist Church | As cease-fire agreements between Fatah and Hamas come and go, a church is literally caught in the middle. (February 7, 2007)

The Middle East's Death Wish—and Ours | We say "everyone wants peace," but we also want to see our enemies destroyed. (David P. Gushee, July 14, 2006)

Love in the Land of Enmity | The local joke is that Gaza is hell. But that doesn't seem to deter ministry there. (Deann Alford, July 2005)

Outreach to Despair | Christians minister to the hopeless in Gaza. (Deann Alford, August 1, 2004)