Daughter of Adventist missionary and her family survives crash in Goma, DR Congo.
April 17, 2008 11:33 AM

News reports of the recent tragic plane crash in Goma, Democratic Republic of Congo, are just beginning to trickle out. One story getting much attention is focused on the heroic action of 14-year-old April Mosier.

In this Mosier family photo, April Mosier is on the far left.

The young woman, was traveling with her mother, father, and 3-year-old brother from Goma to Kisangani, Congo, where her older brother Keith, 24, has begun a mission project. The Mosiers are all serving with Outpost Centers International, a lay ministry that supports the Seventh-day Adventist Church. The flight did not clear the runway ? media reports indicate a tire may have blown out ? and the plane crashed into a nearby open-air market. At least 40 people were reported killed; more than 100 survived, reports indicate. April "probably was one of the first ones to get to the opening," Barry Mosier, her father, said in a telephone interview from Goma two days after ... 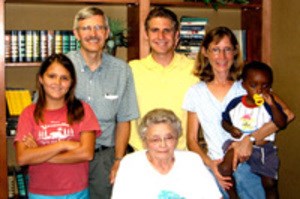