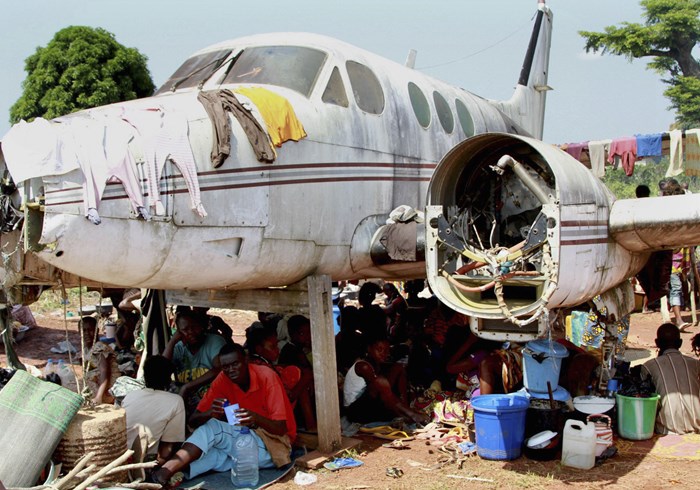 In October, more than 100 Christian leaders of the Central African Republic (CAR) warned the world of the increasing risk of a "genocidal interfaith civil war."

This past weekend seemed to confirm the fears found in their "Bangui Declaration" (copied below)—issued from the capital city of Bangui—as fighting between largely Muslim and Christian militias in Bangui killed between 400 and 1,000 people. 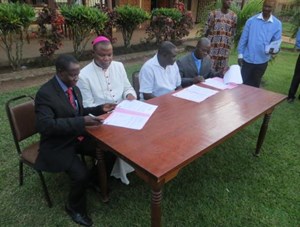 To stem the escalating conflict, the United Nations, led by France, has sent thousands of soldiers to the CAR, long known as "the worst crisis most people have never heard of." (CT previously traveled more than 600 miles through the CAR to report on the "messy business" of clean water.)

While the anti-Balaka groups have been generally described as Christian militia, their actions have been condemned by the Church in CAR, which is calling for peace, the disarming of all armed groups and national reconciliation. Church leaders have also been working with imams in the tense months following the coup to bring reconciliation, and calling for a return to peaceful coexistence between the two religious communities.

Though the landlocked country has long been unstable, this is the first time large-scale religious conflict has torn apart the mostly Christian CAR, the BBC reports. Djotodia is the first Muslim to rule the CAR.

Ambassador Samantha Power, the U.S. representative to the United Nations, said, "We are deeply angered by the atrocities perpetrated by Séléka rebels against innocent civilians, including many children. We are also deeply alarmed by the prospect of CAR becoming a safe haven for violent extremists."

However, Thierry Vircoulon, Central Africa project director at the International Crisis Group, told allAfrica.com that while the situation was critical, the fear of genocide is overstated. And the Catholic archbishop of Bossangoa told Religion News Service (RNS) that the conflict is more about politics than religion itself.

WWM reports a statement released by the Catholic archbishop of Bangui:

The anti-Balaka is the expression of exasperation of part of the population against the numerous abuses committed by Séléka rebels. However, we reiterate that all anti-Balaka are not Christians and that all Christians are not anti-Balaka. It is the same for ex-Séléka and Muslims.

RNS reports the conflict has resulted in 400,000 internally displaced persons and 64,000 refugees. Some 2,000 people journeyed to a Catholic mission in Bouca—a city in the northwest—for shelter in November.

CT has noted how Baptist leaders requested prayer shortly before rebels seized control of the CAR in March, as well as the arrest of the CAR's evangelical leader, Nicolas Guerekoyame, for remarks the pastor made during a sermon. CT also noted the rise of religion as a new fault line in the volatile nation.

Here is the text of the Bangui Declaration:

The Central African Republic is a poor, landlocked country in the heart of the African continent, made up of a population that is 80 % Christian, 15 % Muslim and 5% animist. Despite the regular armed conflicts that the country has known over recent decades, these various communities have always lived in peace and harmony.

Unfortunately, recent events, of a jihadist nature, have devastated the country bringing bereavement to thousands of families and have threatened to destroy interfaith cohesion.

The Church of Central Africa, regrouping all denominations (Catholic and Protestant), assuming her priestly and prophetic responsibilities, would hereby bring to the attention of the international community the cry of the Central African people and draw attention to the human drama that her people are experiencing, which could lead an genocidal interfaith civil war.

On 10 December 2012, the Seleka coalition, 90 % consisting of Muslim extremists from Chad and Soudan, engaged in an army offensive and rapidly occupied the major cities in the north and centre of the country . A political agreement was then signed in Libreville (Gabon) on January 11, 2013 by the belligerents in order to bring settlement to the crisis.

Alleging non-compliance with the agreement, the Seleka coalition launched an assauit on the city of Bangui, March 24th 2013, and succeeded in overthrowing the regime of President Frangois Bozizé.

During its progression and since the of seizing power until this day, the Seleka coalition particularly illustrated itself by massive and unprecedented violations of human rights; widespread looting and destruction of public and private property, illegal occupation of houses and public buildings, assassinations and murders, threats and intimidation, kidnapping, torture and summary executions, the burning of towns and villages, rape directed towards civilians and religious orders, the desecration of churches and religious institutions, violence against priests and pastors in particular, of which a number have been assassinated.

A certain number of Muslims and Fulani's who did not follow the coalition Seleka have also been victims of the exactions.

During the discourse of the Prime Minister, Chief of the transitional government on the 26th September to the United Nations, the humanitarian disaster that the Central African Republic is experiencing was presented as follows:

4,600,000 Central Africans affected by the crisis; 1,600,000 internally displaced refugees, 60,000 children exposed to malnutrition, 62,000 refugees in neighbouring countries, 650,000 children denied access to school, 484,000 inhabitants in a situation of food insecurity, 3,500 children recruited by the armed groups, 13,700 receiving antiviral treatment are exposed to a risk due to the interruption of their treatment...

In this situation, Christians are specifically those the most affected.

RISKS AND THREATS OF RELIBIOUS CONFLICT

Exasperated by these massive and repeated violations of human rights on Christians and non-Muslims, vigilante groups have been formed in the north and northwest to defend themselves against the elements of the Seleka. These groups are subsequently attacked by the Muslim populations in these areas. This phenomenon is spreading throughout the country. In retaliation, elements of the Seleka have begun a genocidal response, whilst the Muslim community has always lived in peaceful coexistence with the non-Muslim population.

Two (2) letters whose signatures are attributed to the Chairman of the transition have been circulating on social networks: one addressed to the lslamic Community of Central Africa in 2006, and the other to the Organisation of the lslamic Conference in 2012. These documents openly expressed a desire to establish an Islamic state that these abuses confirm.

The participation of foreigners in the Seleka, specifically Chadian and Sudanese mercenaries speaking only Arabic, must be noted. Also the complacency or complicity of Chadian elements of the FOMAC with the perpetrators of the atrocities and looting. These facts have led to a xenophobic sentiment amongst the population against Chadian and Sudanese immigrants. A petition was even launched by the civil society for the departure of the Chadian contingent FOMAC.

The abuses perpetrated by the Seleka have even been exported beyond the limits of the CAR border. These actions are likely to cause the spill over of the conflict into neighbouring countries and set a blaze the Sub-region.

VARIOUS INITIATIVES OF THE CHURCH

Christian churches have historically been the architects of a peaceful collective consciousness and social cohesion in CAR, and have been involved in the search for solutions to the crisis through the following actions:

- Participation in a Meeting for Peace and Reconciliation with religious leaders in Rome from 6 to 11 September 2013.

- Involvement of religious leaders in high-level summit on the sidelines of the UN General Assembly September 25, 2013

- Two pastoral letters were addressed to the Transition President, to the International Community and to Christians round the world.

Note also that actions are carried out by Christians to help victims in need.

ROAD MAP TO EXIT THE CRISIS

- lmmediate deployment of an international force with the mission to disarm the armed forces and secure the civilian population throughout the territory, and under the authority of the United Nations.

- Ensure the departure of foreign mercenaries.

- Restoration of the national armed forces. Republican defence forces and security services should resume without delay and to be deployed throughout the territory. - Disarmament of illegal forces

- An emergency humanitarian assistance should be made available to vulnerable populations in areas affected by the conflict as well as measures of support for return of these populations to their home towns.

- Actions to be taken in order to restore trust between the various communities.

- Particular emphasis should be placed on the promotion of civic and patriotic culture. - A comprehensive support for vulnerable people must also be ensured

- The transition should be conducted without people seeking to position themselves for the future It will be primarily aimed at bringing the country back on track. To do this, the transition process will be driven by players ineligible in the upcoming elections.

- A new government composed of men and women of integrity, members of civil society and technocrats, will be formed to lead this process. The composition of the government should take into account the socio-cultural balance of the country.

- Organisation of an lnter Central African Conference of reconciliation involving all stakeholders.

- Drafting of a new constitution.

- Preparation of legislative and presidential elections

Recurrent armed conflicts have weakened the political institutions and marked private operators due to the destruction of the economic and social infrastructure. For this purpose, it is important to proceed with:

- The rehabilitation of judicial institutions, - The development of transitional justice:

Right to truth Right to justice: prosecution of actors of killings, abuses and other crimes Right to reparation Right to guarantee of non-repetition,

The country's economy being predominantly agricultural, the promotion of agriculture and livestock will mobilize more energy and resources. For this, it is urgent to:

- Establish a procurement mechanism for bloodstock and improved seeds,

- Facilitate the access of farmers and herders to microcredit

- To promote the mechanization of agriculture

Central population is predominantly young, and an emphasis should be placed on the promotion of entrepreneurship in all areas by:

- The establishment of vocational centres , agricultural and pastoral training ,

- Supervision of the informal sector. Upgrading of local commodities

The mining sector occupying an important place in the gross national product, it is imperative to carry out the reorganisation and the introduction of more transparent management.

Given the severity of the problems and relevance of proposed solutions, it is important to develop a structure for the implementation and the monitoring of various programs with a strong involvement of the Church of Central Africa.

As one man, the suffering people of the CAR, through the voice of the Christian Church which represents more than 85 % of the population, strongly appeals to the international community in general, and to its counterparts in the West in particular, to fly rapidly to the rescue, to prevent the country from falling into the hands of extremists and religious fanatics.

General Secretary of the Evangelical Alliance of Central Africa

President of the Evangelical Alliance of Central Africa

General Secretary of the Episcopal Conference of Central Africa

President of the épiscopal Conference of Central Africa