(UPDATED) Local leaders debate whether major US policy change would jolt or freeze the Israeli-Palestinian peace process.
Jayson Casper in Cairo|December 5, 2017 10:10 AM 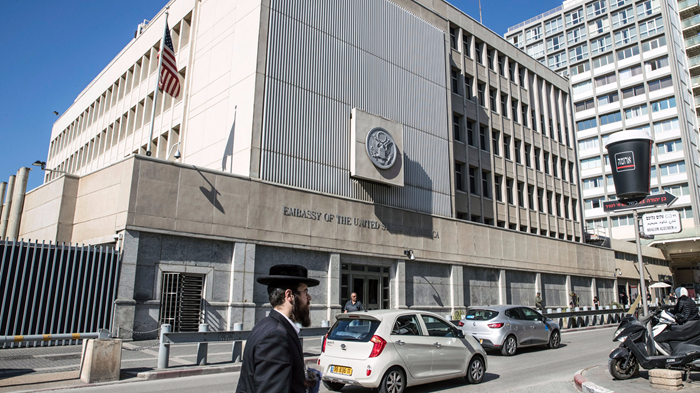 President Donald Trump is expected tomorrow to recognize Jerusalem as the capital of Israel.

Doing so would fulfill a campaign promise. It would upend decades of American foreign policy.

And it would simultaneously encourage and unnerve the Christians of the Middle East.

“I am obviously pleased, as an Israeli,” said David Friedman, a professor at the Messianic Jewish Theological Institute and former dean of King of Kings College in Jerusalem.

“Jerusalem is the capital of Israel, de facto, concretely. Our government sits there. So why should President Trump continue ignoring reality?”

But 65 miles north in Arab-majority Nazareth, another Christian educator has a dramatically different response.

“It is a bad idea,” said Botrus Mansour, a Baptist elder and co-chair of the Lausanne Initiative for Reconciliation between Israel and Palestine. “It will increase resentment and possibly spark unnecessary violence, making peace harder to obtain.

“America will lose any remaining legitimacy it had as a fair broker.”

Israel occupied Arab East Jerusalem in 1967, and passed a law in 1980 declaring the city its eternal, united, and undivided capital. The United Nations declared the act null and void, by a unanimous resolution in which the United States abstained.

Palestine also desires Jerusalem as the capital of a future state. So American policy has been to leave the thorny issue for negotiation between the two sides, based on the 1967 border.

But in 1995, Congress passed a law requiring the US embassy to move to Jerusalem—unless the president exercises a waiver, every six months.

Every president since then has done so—including Trump, once. He allowed his second deadline to expire on Monday, technically requiring the embassy to move. If so, the United States would be the only nation with its embassy in Jerusalem.

“It would undermine the Palestinian cause even further,” said Mansour. “It is not just a statement, but an action. Another fact on the ground.”

“If it is not moved, Israel will not be greatly affected. We will not mourn,” he said. “Our capital won’t be moved to Tel Aviv, [just to be] in accordance with a politically chic, ‘international’ perspective.”

Trump’s anticipated announcement has prompted a flurry of international concern. Arab world nations have warned against the damage it will do to the peace process. Hamas has promised a new intifada (uprising). France says it may have to pursue its own course in the region.

But the biggest impact may be felt by Israel’s neighboring states: Egypt and Jordan. Both have peace treaties with Israel, but maintain strong support for the Palestinian cause.

“[Recognizing Jerusalem] will create more tension in the region, and encourage extremists,” said Andrea Zaki, president of the Protestant Churches of Egypt.

“It is not a helpful position, and Egyptian Christians will be disappointed.”

In Jordan, Christians feel “fragile,” said Philip Madanat, adjunct professor of sociology at JETS and a researcher of Islamic movements. Christians, he said, fear any change to the status quo.

“There can always be surprises in the street, especially if economic frustration mixes with political outrage over Jerusalem,” he said. “It just needs a spark.”

Johnnie Moore, co-chairman of Trump’s unofficial faith advisory board, believes the decision is being massaged behind the scenes.

“It is very unlikely that the administration would make such a decision without meaningful and substantive consultation with our Arab and Israeli allies,” he said. Moore was recently part of an evangelical delegation that visited the leaders of Egypt and Jordan.

“There will be lots of rhetoric over the next few days, but there’s more to the story, for sure,” said Moore. “The reasoning will likely become more apparent in the coming weeks or months.”

Chris Seiple, president emeritus of the Institute for Global Engagement, thinks the rhetoric is more serious.

“Our Sunni allies are against it, and it will reinforce the perception that America is less than even-handed in approaching the Israeli-Palestinian conflict,” he said.

“We can expect tremendous unrest and perhaps violence in the near-term; perhaps killing the peace effort in the long-term.”

President Trump has signaled that he will defend Palestinian interests if both sides pursue a two-state solution, and that recognizing Jerusalem as Israel’s capital does not preempt negotiations about its borders.

Seiple observes Trump has also given himself “flexibility” on the embassy.

Madanat downplayed the possible embassy move, saying the real issue is recognition—the US siding with Israel—if there are no corresponding nods to Palestinian demands.

Warnings of demonstrations sound dire, he said, though they have generally settled down in the past. But this time could be different, as the stakes are higher than even when the peace treaty was signed.

This is because Jordan’s King Abdullah inherited historical custodianship of Jerusalem’s holy places, both Muslim and Christian.

“If you pull out the carpet [giving Israel responsibility], the Hashemites lose one of the most important pillars of their legitimacy,” he said.

“We cannot imagine Jordan without the Hashemites. There is little we can do except stand behind the king.”

Given the shared importance of Jerusalem to all three Abrahamic religions, Zaki also prefers treading carefully.

“If [Trump] recognizes Jerusalem as the capital of the Jewish state, it is against justice for the other two, and against Palestinians themselves,” he said.

“Keep it as the capital of all three religions.”

But even among Middle Eastern Christians, religion is a dividing factor.

“I am true to what I see the Torah teaching on this subject matter,” said Friedman, highlighting prophesies in Joel and Zachariah, as well as “Yeshua’s” words in Matthew 5.

“Jerusalem is part of the covenantal land inheritance granted in God’s mercy to the descendants of Jacob, and God’s covenants are eternally valid.”

“Jesus makes it clear that specific places of worship are not important but rather that people matter,” he said, highlighting John 4.

“When the Psalmist asks us to ‘pray for the peace of Jerusalem,’ it involves acting to preserve the human dignity of everyone living there.”

International religious leaders tend to agree with Mansour—or at least against Trump. Pope Francis has called for the status quo of Jerusalem to be respected. The patriarchs and heads of local churches in Jerusalem did the same.

Evangelicals in the US tend to agree with both—but mostly with Friedman.

“So far, for evangelicals, the Trump administration is batting a thousand.”

According to a new survey by LifeWay Research, 63 percent of Americans with evangelical beliefs support Israel primarily because “God gave the land of Israel to the Jewish people.” Only 22 percent are not sure the biblical promises are still in force.

However, 59 percent say Christians should do more to love and care for the Palestinians (though only 22 percent say Israel has been “unfair” to them). Meanwhile, 42 percent say they support Israel, but not everything Israel does.

Among younger American evangelicals, however, things seem to be changing. Though most millennials (those under age 34) have a generally positive attitude toward Israel, 41 percent have no strong views about the Jewish state, while 19 percent see the rebirth of Israel as an injustice and 47 percent are not sure.

In Israel, Friedman says the younger generation’s support for the state is as “intense” as it has been for their parents.

“Our lives, our children’s lives, our very existence, our nation’s existence, and the continuance of the Jewish people,” he said, “is at stake every minute of every day.”

But Mansour notes an interesting development among Arab Palestinians.

“Surprisingly, the new generation is both more Israeli and more Palestinian,” he said. Arabs are finding employment with Jews, while rediscovering their identity in the academic freedom of Israeli and other regional universities.

While trailing Jewish enrollment by about half, the percentage of Arab men in Israel receiving some post-secondary education has doubled in the last two decades, according to Israeli labor force statistics. In 1990, it was only 14 percent; in 2011, it was 27 percent.

“They are confronted with other students from different nations and they have their identity questioned,” Mansour said. “They read more and are exposed to what is happening in the world. They realize they are among the only people without self-determination.

“Their Palestinian identity is intensified.”

But the Israeli identity is also rising. A 2015 survey of Baptist leaders in Israel had 75 percent label themselves “Arab-Israeli Christians,” deemphasizing their Palestinian identity.

And a recent Kivun poll found 63 percent of all Arab Israelis agreeing Israel is a good place to live.

“The severest critics of Israel among Arab believers here are largely financed by interests from outside of Israel,” said Friedman. “These Arab Christians speak loudly to the Western Christian world.”

True or not, they also speak consistently.

“More than 300,000 Arab Muslim and Christian Palestinians live in occupied East Jerusalem,” said Mansour. “Forcing an Israeli rule on them is wrong.”

What if Trump were to try to satisfy both, and have the US position honor Jerusalem as the capital of both nations?

“To have Jerusalem serve as a Palestinian capital would necessitate the division of the city, physically and politically,” said Friedman.

“All peace conferences can take place with the Jewish state having its capital recognized exactly where it is. This is no block to peace talks, only an excuse and manipulative ploy not to convene peace talks.”

But Jordan’s Madanat thinks such a fait accompli would hurt the Palestinians.

“If they get dragged into negotiations they might only wind up getting a district in East Jerusalem,” he said. Abu Dis, the suburb where Palestinians have built some government buildings, has been cordoned off from the rest of Jerusalem by the separation wall.

“They have to be strong enough to negotiate [Jerusalem] on their own, or else they are lost.”

Perhaps Trump is hoping to recognize the reality on the ground, and get it unstuck.

But there are two approaches to peace, said Seiple, and Trump appears to be risking both.

One approach is “inside-out,” where local players are helped to agree. Currently, this does not appear to be working.

“A declaration of Jerusalem as Israel’s capital and the move of the embassy will help the world move on,” said Friedman.

But not the Palestinians. “The peace process is frozen,” said Mansour. “This will just extend the freeze for another decade, and add to the hostility.”

The other approach, “outside-in,” seeks regional consensus for the whole region—of which the Israeli-Palestinian issue is a part, but also the rights of religious minorities.

“Given the defeat of ISIS, there is theoretically an opportunity,” said Seiple.

“One city, two states, three religions. The one and three are a given; [the question] is how you get to two.”

Praying for the Pieces of Jerusalem: Mideast ...