Regardless of court fight’s final outcome, fewer persecuted Christians will make it to America under president’s plan.
Jeremy Weber|February 10, 2017 12:09 AM
Image: tani.P / Flickr
Protesters at Atlanta's international airport the day after Trump's executive order went into effect.
Why Tim Keller, Max Lucado, and Hundreds of Evangelical ...

More than 500 conservative evangelical pastors and leaders representing all 50 states are urging President Donald Trump to reverse his temporary ban on refugee resettlement and his “dramatic reduction” of the total America will accept this fiscal year.

The open letter, published Wednesday as a full-page ad in The Washington Post with more than 100 of the signatories listed, was notable for two reasons. First, it contained only conservative evangelicals, instead of the mix of progressive names that usually sign such open letters. And second, topping the list were Tim Keller and Max Lucado—two well-known and well-respected pastors and authors who rarely speak out on political matters.

“As Christian pastors and leaders, we are deeply concerned by the recently announced moratorium on refugee resettlement,” stated the group letter, later noting, “We have a historic call expressed over 2,000 years to serve the suffering. We cannot abandon this call now.”

Currently tied up in the court system, the president’s controversial executive order suspends the entire US refugee resettlement program for 120 days and indefinitely bans refugees from Syria. It also halves the number of refugees that can come to the United States this fiscal year from 110,000 to 50,000.

“We live in a dangerous world,” acknowledged the group letter, “and affirm the crucial role of government in protecting us from harm and in setting the terms on refugee admissions.

“However, compassion and security can coexist, as they have for decades,” it continued. “For the persecuted and suffering, every day matters; every delay is a crushing blow to hope.”

The organizer of the group letter—World Relief, the humanitarian arm of the National Association of Evangelicals (NAE) and one of the nine agencies that resettle refugees in America—explained on a conference call Thursday morning that the signatories have grown to more than 3,000. It continues to gather signatures.

Three key takeaways from the executive order’s implications and evangelical reactions so far:

2) American evangelicals at the grassroots are much more evenly split.

3) Regardless of the court fight, fewer persecuted Christians will find refuge in America under Trump’s plan.

1) Most evangelical leaders oppose the executive order’s impact on refugees.

While a small group of conservative evangelical leaders—including Samaritan’s Purse’s Franklin Graham, the National Religious Broadcasters’ Jerry Johnson, and the American Center for Law and Justice’s Jay Sekulow—have spoken out in defense of Trump’s plan, the open letter in the Post further cemented the growing consensus among evangelical experts that Trump’s executive order on refugees is unnecessary and harmful.

“My hope is that it causes them to ask what the real facts are, and that we can have—and have had—both security and compassion,” he told CNN. “I think many will notice the names on the advertisement and give this another look.”

It joins a previous noteworthy statement by leaders from World Vision, the National Hispanic Christian Leadership Conference, the Accord Network, the CCCU, The Wesleyan Church, Korean Churches for Community Development, the NAE, and World Relief. Meanwhile, a solidarity statement from We Welcome Refugees is backed by Willow Creek, Q, OM (Operation Mobilization), and the World Evangelical Alliance, in addition to World Relief, World Vision, and the NAE.

The Southern Baptist Convention voted last summer to back refugee resettlement, and its Ethics and Religious Liberty Commission leader Russell Moore recently wrote to Trump: “As a nation, we must seek to resolve the tension created by these two values—compassion for the sojourner and the security of our citizens—in a way that upholds both values.”

“Closing our doors grants a propaganda victory to terrorists,” stated the NAE’s Galen Carey during yesterday’s conference call. “Compassion and security go hand in hand, as Jesus taught and as we have seen throughout our history of successful refugee resettlement.”

“For some people, embracing refugees is a political issue,” stated Lynne Hybels in a related press release. “For me, as a Christian, speaking up for and caring for refugees is more an act of worship and obedience to a God whose Kingdom is global and whose ‘mercies are new every morning.’”

2) Evangelicals at the grassroots are much more evenly split.

According to available polls, most of which measure self-identity not religiosity, evangelical leaders have more work to do to convince many of the people in their pews.

CT has previously reported how US congregations are twice as likely to fear refugees as to help them. World Vision recently found that prayer and support for refugees is waning, and in 2015 found that a quarter of committed Christians (24%) said they were unwilling to help Syrian refugees. The reasons given included the fear that Syrian refugees were potential terrorists (34%), not wanting to help Muslims (22%), or feeling the problem was too big to make a difference (24%).

According to a Pew Research Center survey conducted before the election, about two-thirds of white evangelicals (67%) believe that America does not have a moral responsibility to accept Syrian refugees.

More than half of white evangelicals (54%) and white mainline Protestants (53%) would support a law barring Syrian refugees from entering the United States, according to a survey conducted in June by the Public Religion Research Institute. A majority of those same groups, as well as a slight majority of white Catholics (52%), also endorse a temporary ban on Muslims coming to the United States from abroad, the survey found.

However, two-thirds of Protestant senior pastors (67%) believe the United States can balance national security interests with compassion when assisting refugees, according to LifeWay’s 2016 survey.

And World Relief had a record number of churches volunteer to help refugees resettle in America last year, while a solidarity pledge by We Welcome Refugees surpassed its original goal of 10,000 signatures, and was poised to break 20,000 on Friday.

3) Trump’s plan means fewer persecuted Christians will make it to America, not more.

Supporters of the need for Trump’s plan often cite the well-documented fact that ISIS has committed genocide against Christians and other minorities, yet the US refugee program has resettled far more Muslims than Christians from Syria, as noted by Kirsten Powers and others. (CT previously examined explanations for the stark disparity.)

Though Trump himself has promised to prioritize persecuted Christians for refugee resettlement, many evangelical experts on the issue are not asking for that—in the United States or in the Arab world. (CT recently explored this question with four expert views and a podcast.)

“As leaders, we welcome the concern expressed for religious minorities, including persecuted Christians,” stated the group letter in the Post. “Followers of Christ face horrific persecution and even genocide in certain parts of the world.

“While we are eager to welcome persecuted Christians, we also welcome vulnerable Muslims and people of other faiths or no faith at all,” it continued. “This executive order dramatically reduces the overall number of refugees allowed this year, robbing families of hope and a future. And it could well cost them their lives.”

Regardless, Trump’s reducing of the resettlement target from 110,000 to 50,000 refugees mathematically means that fewer persecuted Christians will make it to America this fiscal year—even if all of the remaining slots went to Christians only.

Given that the US resettled more than 36,800 Christians in fiscal year 2016 (out of almost 85,000 total), fewer Christians can be resettled this year. Even if all the remaining spots went to Christians (an unlikely scenario), that would still be about 6,600 less than were resettled last fiscal year.

Meanwhile, the court fight over the executive order—and resulting nationwide temporary restraining order against its enforcement—has allowed more than 900 Christian refugees to make it to America. Including:

Since Trump’s executive order on January 27, roughly 41 percent of refugees that have made it into America have been Christians and 44 percent have been Muslims, according to State Department data. Of the 2,271 refugees, about 940 were Christians and 1,000 were Muslims.

Already, most religious minority refugees that come to America are Christians, according to a Pew analysis of data from the State Department’s Refugee Processing Center. Overall, about one-third of refugees resettled in the US last fiscal year were religious minorities.

Pew found that 61 percent of last year’s refugees that were religious minorities were Christians. The next largest group was Muslims (22%), who have numerically borne the brunt of violence by ISIS and other Islamist extremists. 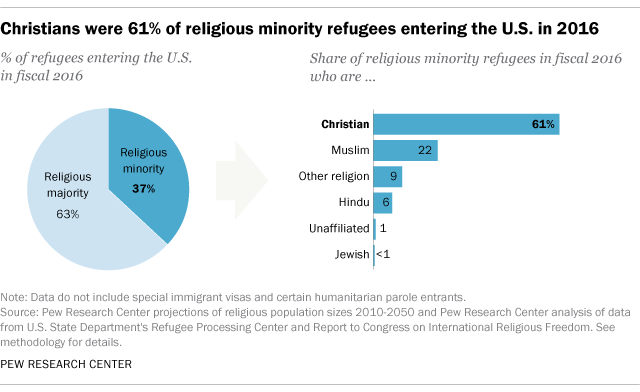 The previous target set by the Obama administration of more than 100,000 refugees for resettlement in fiscal 2017 was the highest goal since 1995, according to a Pew analysis. The increase came as the world has experienced record levels of displacement. For example, while the US debated resettling 10,000 Syrians, CT visited a country smaller than Connecticut struggling to host 1.5 million.

“Many of us do not realize that thousands of Middle Eastern Muslim people are crying out to the church for help,” stated Eric Costanzo, senior pastor of South Tulsa Baptist Church in Oklahoma, on the World Relief conference call. “They have heard of Jesus’ and His followers’ reputation for kindness and charity. I signed the letter because I believe caring for those who are suffering, oppressed, poor, broken, and vulnerable comes directly from the heart of God.”

“As Christians, we are committed to praying for our elected officials,” concluded the group letter in the Post. “Our prayer is that God would grant President Trump and all our leaders divine wisdom as they direct the course of our nation. We also pray for the vulnerable individuals whom their decisions directly impact.” 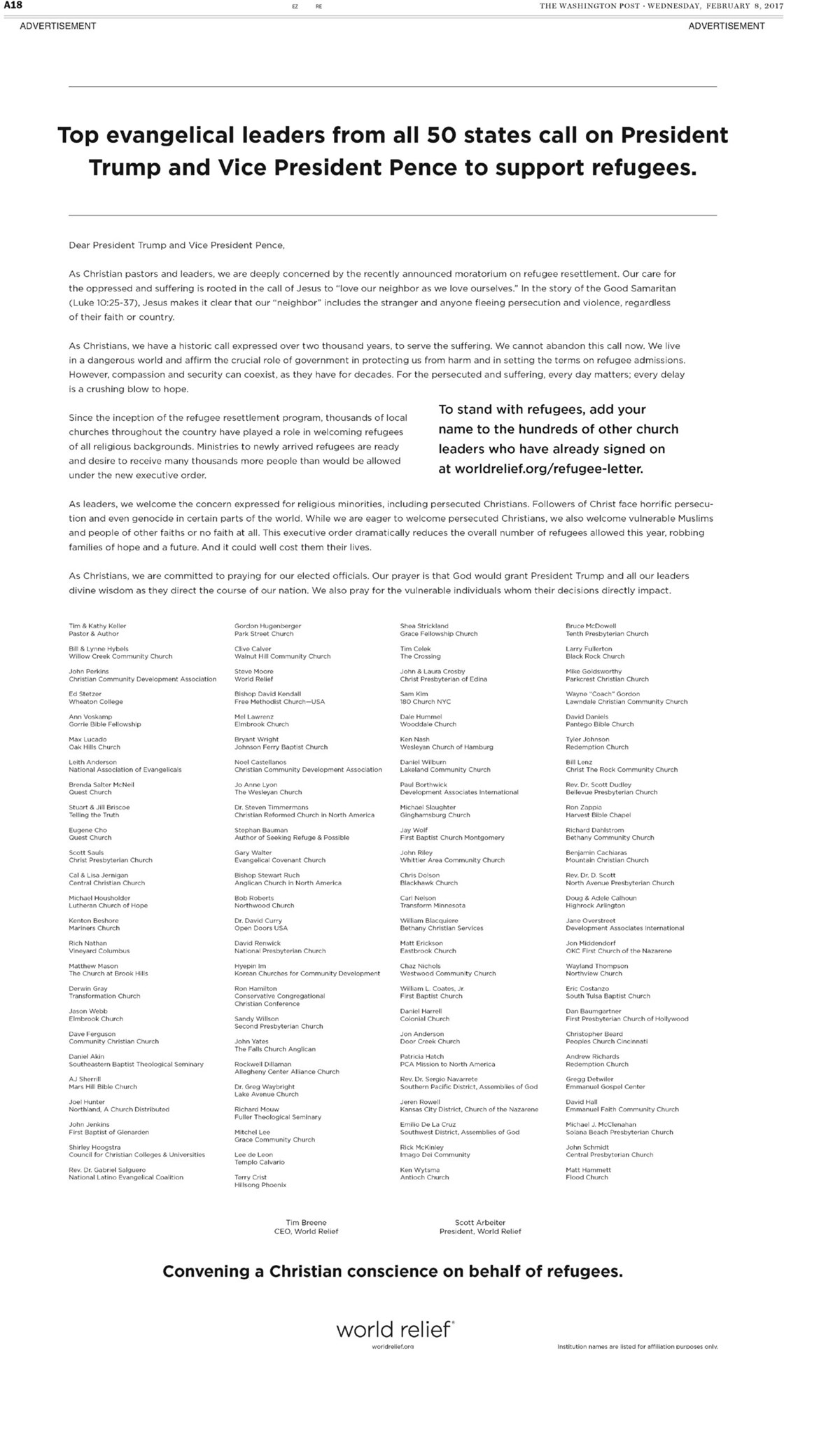 Why Tim Keller, Max Lucado, and Hundreds of ...