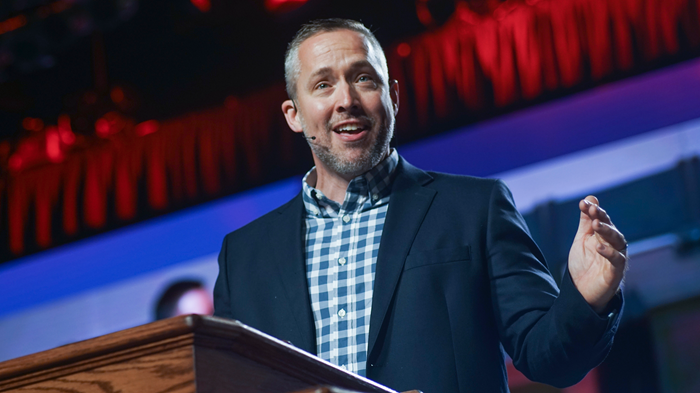 J. D. Greear stepped out of the 2016 election for president of the Southern Baptist Convention (SBC) in the third round of voting. But today, it only took one ballot for thousands of delegates to elect him to the helm.

Greear, a 45-year-old whose North Carolina megachurch has become a missions juggernaut, beat out former seminary head and SBC statesman Ken Hemphill by a margin of 69 percent to 31 percent at the 2018 annual meeting in Dallas, becoming the denomination’s youngest president in 37 years.

Several pastors and fellow leaders cheered his election, saying Greear’s victory signals a “new day in the SBC” and leaves them “optimistic about the future.”

Hemphill tweeted out his congratulations shortly after Tuesday’s announcement, saying that Greear will make a “fine president.”

Though the position is largely a symbolic, visionary leadership role—SBC churches are autonomous, and much of the major denominational decision-making happens within independent SBC agencies—Southern Baptists are looking to Greear during a tumultuous time.

“God is stirring in the SBC. He has exposed a startling amount of sin in our midst. He has shaken many of our foundations. And I actually think that’s good news, because whom the Lord loves, he chastens,” the newly elected president wrote. “He is inviting us, I believe, into an era of unprecedented effectiveness for the Great Commission, if we repent.”

America’s largest Protestant body is now grappling with yet another year of steady declines, plus unprecedented pressure to address the treatment of women and incidents of abuse within its churches.

Christianity Today profiled Greear and his Summit Church in its June issue, and the pastor also spoke about his calling in a 2016 episode of CT podcast The Calling.

Much of Greear’s presidential platform focused on renewing church planting and personal evangelization among Southern Baptists, including better engagement with young people in churches.

He’s seen as somewhat of a bridge-builder between generations—and between younger, Reformed and Calvinist leaders and “traditionalists” who believe in an Arminian view of salvation—having studied at Southeastern Baptist Theological Seminary (SEBTS) under one of the most historically prominent leaders in the denomination, Paige Patterson. (In recent weeks, as controversy surrounded Patterson—forcing him out of seminary leadership and off the annual meeting agenda—Greear has had to make his own statements condemning abuse and addressing the backlash against his mentor.)

What Greear’s backers see as a fresh approach to ministry, critics worry represents a betrayal of denominational values. For example, the Gen X pastor’s church doesn’t contain the word Baptist in its name.

Hours after his election, the Summit Church pastor spoke to the delegation alongside Atlanta pastor Dhati Lewis about engaging in multicultural and racial dialogue.

“We need to recognize the leadership gifts of brothers and sisters of color that God has placed in our midst and embrace their leadership,” Greear stated in January, naming diversity one of his top priorities should he be elected president. “This should have happened a long time ago, but in this new era we desperately need their wisdom and influence.”

Greear takes over as president in the midst of the 11th consecutive year of Southern Baptist decline.

With 15 million members, the SBC is in no danger of losing its position as one of America’s top denominations, second in size only to the Roman Catholic Church. But it has lost 1.3 million members since 2006, according to the denomination’s Annual Church Profile (ACP) released this month.

Baptisms have also dropped by over a quarter in the past decade, down to 254,000 last year. (Only about three-quarters of churches report their figures to the ACP, so it doesn’t offer a full picture of the denomination but still indicates major trends and is taken seriously by leaders.)

Only a few measures in this year’s ACP, which the bloggers at SBC Voices deemed a “statistical release weepfest,” showed promising growth. After dropping to a 20-year low the year before, worship attendance is finally on the upswing, rising 2.3 percent in 2017. In addition, the SBC added another 270 churches.

“When Southern Baptists are facing a secularizing American culture, some people are tempted to panic about that. J. D.’s not panicked,” Russell Moore, president of the Ethics and Religious Liberty Commission, told CT earlier this year. “He’s been reaching secularized people with the gospel for a long time, so he’ll be a very able spokesperson for leading the denomination.”