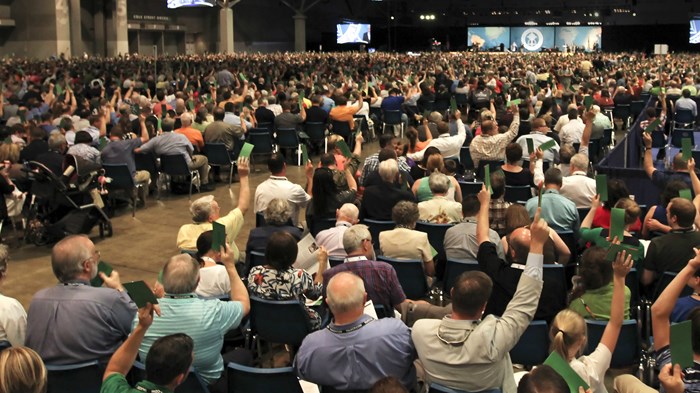 In an unusually contested race, Southern Baptist messengers elected Tennessee pastor Steve Gaines as their next president this morning.

Gaines replaces Ronnie Floyd, who has served the maximum two consecutive terms. SBC presidents are elected one year at a time; the post is largely honorific, except for its ability to fill certain leadership positions.

The SBC actually meant to elect a new president yesterday. But a rare tight race between the top two out of three candidates—North Carolina pastor J. D. Greear (45%) and Gaines (44%)—led to a runoff vote. (A candidate must receive just over 50 percent of the vote to win.) 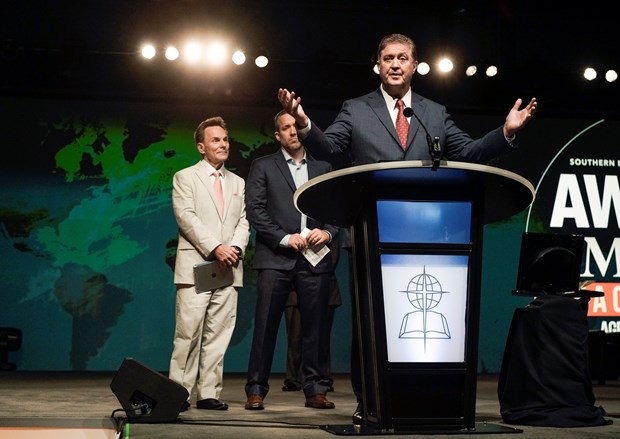 Yesterday’s runoff vote was also too close to call, with Gaines receiving 49.96 percent of the votes and Greear receiving 47.8 percent. (More than 100 ballots were disqualified, yet were included in the determination of the total number of votes needed for a victory.)

This morning, in a surprise move, Greear pulled out.

“I spent a good amount of time last night praying, and believe that for the sake of our convention and our mission we need to leave St. Louis united,” he told the messengers. “In this room, we have various minor points of difference between us … but we are united by a gospel too great and a mission too urgent to let any lesser thing stand in our way. And one of the candidates leaving the convention with a 51 to 49 victory on a third ballot is just not going to serve our mission well. So I am respectfully withdrawing my candidacy as president.” 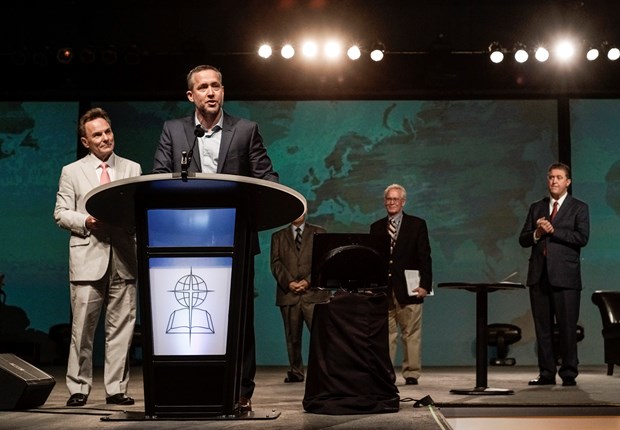 Gaines and Greear both said they felt the urge to pull out after the runoff vote in order to preserve denominational unity. They prayed together, and decided that Gaines should take the leadership position. The messengers approved the move with a near-unanimous standing affirmation.

Gaines is “a traditionalist on evangelism, the need for personal commitment to Christ in salvation, and the commonly held Baptist soteriology of the past century,” noted Eric Reed, editor of the Illinois Baptist,while Greear’s leadership is more contemporary and more Reformed.

Yes, this election may appear to be about the passing of boomers and the ascendance of Gen-X and Millennials to top leadership in the convention. But more important, it’s about theology and the breadth of the SBC tent. The denomination took a decided step to the right when Patterson, Rogers, and the leaders of the 1970s and 80s planted a firm stake for biblical inerrancy and social conservatism. But the convention has continued inching right as a generation of pastors inspired by Southern Seminary president Al Mohler and other reform theologians assumes leadership.

A 2012 survey found that about equal numbers of SBC pastors identify their congregations as Calvinist/Reformed (30%) or Arminian/Wesleyan (30%). More than 60 percent of pastors were concerned about Calvinism’s influence on the denomination.

Gaines has spent the last 11 years as pastor of Bellevue, the largest church in the Memphis area.

"I would like to continue [Floyd's] emphasis on seeking God for a spiritual awakening and revival,” Gaines told Baptist Press (BP) when he was nominated. “I've been praying for an awakening for a long time, and that's really my heart. I want the manifest presence of God in our churches and also in our denomination.

The SBC has “a real problem with our baptisms,” Gaines told BP. "We need to get back to personal evangelism and soul winning.”

Not only have baptisms declined the last 9 years out of 11, but weekly attendance has also dropped to 5.6 million, according to the SBC’s annual church profile. On the other hand, 2015 was the 17th year that the number of SBC churches has grown, and undesignated giving was up by more than $400 million.

Greear is pastor of The Summit Church, which has grown in worship attendance from 350 to almost 10,000 during his 14 years there. Summit is a member of the Acts 29 church planting network, and has planted 26 churches in conjunction with the SBC’s North American Mission Board.

"One of the things God has put on my heart is that my generation needs to take personal responsibility for the agencies and the mission boards of the SBC and not just think of them as the SBC’s, but think of them as ours,” Greear told BP after he was first nominated.

“Missions is more effective when done in cooperation with like-minded churches, and we feel really good about the [entities] of the Southern Baptist Convention and how they’re leading,” he told BP.

Greear had laid out his four “biggest passions” for the SBC in a blog accepting his nomination: to continue and deepen the focus on gospel-centeredness in theology and mission; to engage culture with grace and truth; to encourage congregations to engage in the entities and boards of the SBC; and to equip non-Anglo pastors and members.

Greear released a rap video promoting his presidential run, which led International Mission Board president David Platt to say he didn’t intend his participation to be an endorsement of the candidate, but would “be thrilled” to serve alongside Greear or Gaines.

Greear, 43, would have joined David Platt, 36, and Ethics and Religious Liberty president Russell Moore, 44, in a trifecta of younger SBC leaders.