'Francis effect' may yet materialize. But for now, Catholics have hit record low across 19 nations and territories.
Morgan Lee|November 13, 2014 11:17 AM 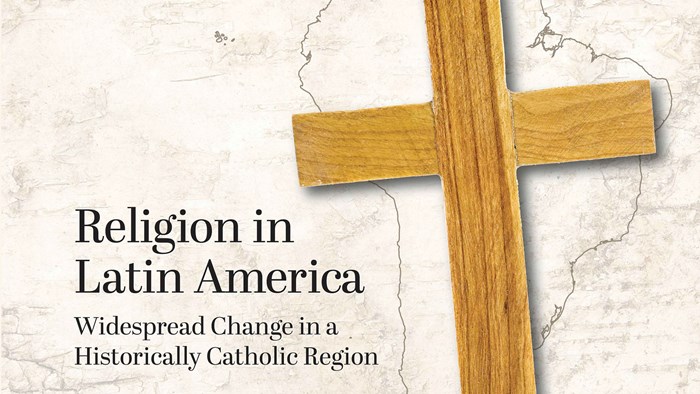 [Editor's note: CT also took a deeper look at differences between what Protestants believe and practice in each country.]

Enthusiasm for the first pope picked from Latin America has prompted predictions of a “Francis effect” revival among the region’s Roman Catholics. Time will tell, but a new report shows exactly what the former Archbishop Bergoglio of Buenos Aires is up against in his own backyard: Protestants are remarkably ascendent across 18 nations and one US territory.

For most of the last century, more than 90 percent of Latin Americans identified as Catholics. But now that number has hit a new low: 69 percent, according to a thorough report on this "widespread change" released today by the Pew Research Center. 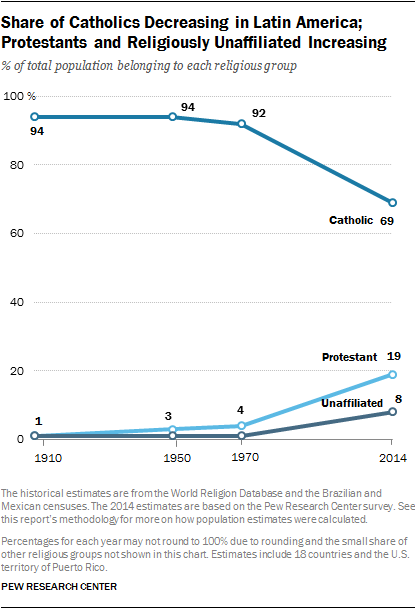 "In nearly every country surveyed, the Catholic Church has experienced net losses from religious switching," notes Pew, and "much of the movement ... has occurred in the span of a single lifetime."

The trend holds true across "people of all ages and socioeconomic levels," but in most countries, pluralities converted before the age of 25.

Pew’s findings corroborate a recent examination of 18 nations by Latinobarómetro. “In the past, Latin America was completely dominated by Catholicism,” noted the respected Chilean research group in an April report. “Today, it’s a region where clearly more than one religion exists.”

Pew researchers conducted face-to-face interviews with more than 30,000 residents of 18 Latin American countries and Puerto Rico as part of the Pew-Templeton Global Religious Futures Project. (Cuba was the only Spanish-speaking country omitted.)

“It is too soon to know whether Francis can stop or reverse the church’s losses in the region,” notes Pew. (The majority of surveys were conducted before Francis had concluded his first year in office.) 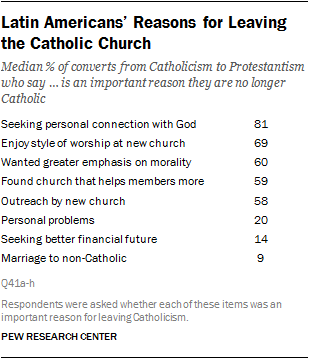 "Of the eight possible explanations offered on the survey, the most frequently cited was that they were seeking a more personal connection with God," notes Pew [see chart]. "Many former Catholics also said they became Protestants because they wanted a different style of worship or a church that helps its members more." More than half also "wanted a greater emphasis on morality." Marriage to a non-Catholic was only cited by 9 percent.

Notably, more than half of former Catholics (58 percent) say their new Protestant church reached out to them.

The countries where Catholics have experienced the largest declines: Nicaragua, Uruguay, Brazil, and El Salvador, all down approximatley 20 or more percentage points. (By comparison, US Hispanics have lost 22 percentage points.)

However, despite their substantial growth, Protestants have yet to break into the majority in any Latin American country. 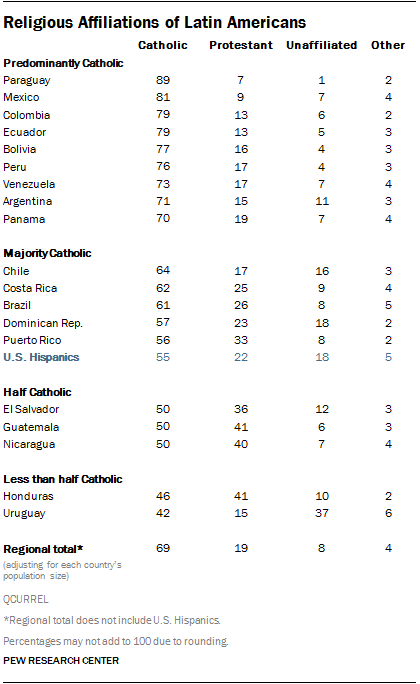 “In every other country in the survey, no more than roughly half of ex-Catholics view Francis favorably, and relatively few see his papacy as a major change in the Catholic Church,” notes Pew. “Many say it is too soon to have an opinion about the pope.”

Latin American Protestants also have different views than Catholics on the "most important way Christians can help the poor." Protestants believe "bringing the poor and needy to Christ" (47 percent) is more important than "performing charity work for the poor" (37 percent) or "persuading the government to protect the poor" (11 percent). By comparison, Catholics believe charity work (50 percent) is more important than evangelism (24 percent) or governmental efforts (19 percent). 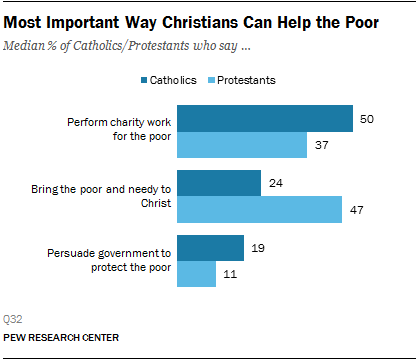 Twelve Latin American countries still contain solid Catholic majorities, according to the Latinobarómetro study. In two countries, Chile and El Salvador, Catholics make up between 50 and 60 percent of the population, while in Guatemala, Honduras, Nicaragua, and Uruguay, the Catholic Church no longer owns a majority.

Researchers also measured the yearly changes between the Protestant and Catholic populations from 1995 and 2013. “You can observe that in every country, with the exception of the Dominican Republic and Mexico, there has been a loss of Catholics occurring at the same time as the number of evangelicals has increased,” noted Latinobarómetro.

Below are the results for Honduras, Nicaragua, and Brazil. Researchers identified Honduras as the country with the “fastest and strongest change in religious beliefs out of all 18 Latin American countries.” Nicaragua was close behind. 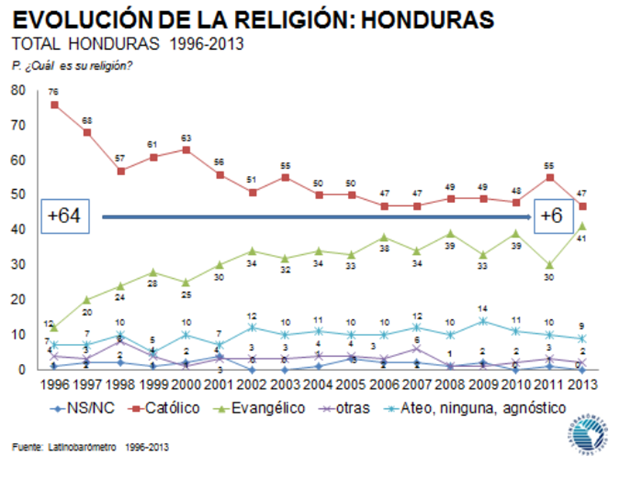 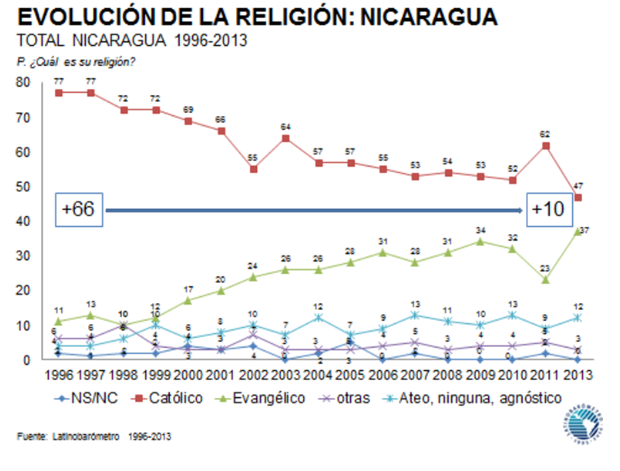 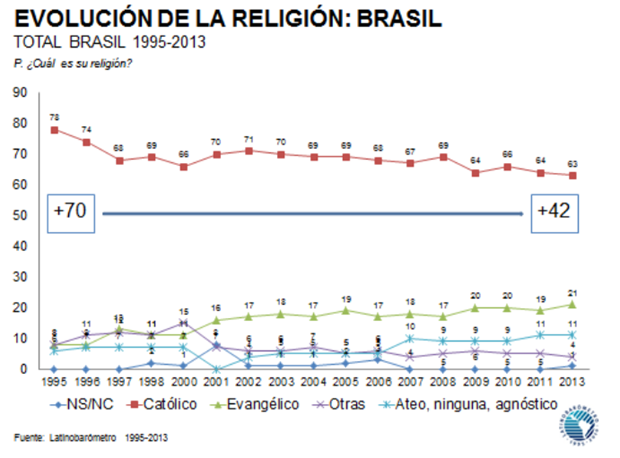 CT first reported Protestants’ ascendency in Latin America in a 1992 cover story, and examined in 2009 whether the rapidly growing church was on the right track.