Hillsong: ‘What a Beautiful Name’ for a New Denomination Spanning ‘Oceans’ 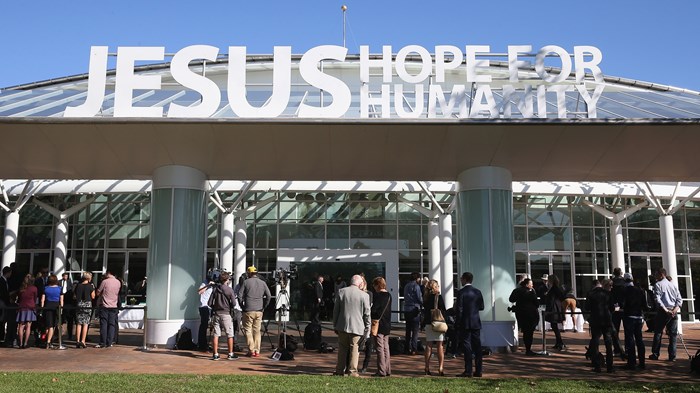 After more than three decades as the largest and best-known member of the Australian Christian Churches (ACC), Hillsong Church announced last week it would split from its parent group and form its own denomination.

The leadership of both Hillsong and the ACC, a branch of the larger World Assemblies of God Fellowship, have described the parting as amicable.

“I want to make it clear that we have no grief or dispute at all with the ACC,” wrote Hillsong Church cofounder and global senior pastor Brian Houston in a letter announcing the separation. “Instead, this decision comes after almost two years of prayerful discussion within both our global and Australian church boards.”

Founded in Sydney in 1983 by Houston and his wife Bobbie, Hillsong exploded into one of the most recognizable brands in contemporary Christianity.

With three record labels, a broadcasting network, global conferences, and its own college, Hillsong has blossomed beyond the geographical contours of its former denomination. With churches in more than 20 countries across 5 continents and 263 separate church services per weekend, the network estimates weekly attendance at Hillsong churches averages about 130,000.

A relatively small denomination in terms of attending congregants—by contrast, there are nearly 70 million Assemblies of God members worldwide, and approximately 375,000 constituents of the ACC specifically—Hillsong boasts enormous influence. Tens of millions of Christians spanning 60 languages sing Hillsong originals, such as “What a Beautiful Name” and “Oceans,” every Sunday. Millions more watch and listen to its programming.

In his parting letter, Houston wrote admiringly of ACC president Wayne Alcorn, citing their mutual care for the movement and work of the charismatic denomination. Houston said the goal is to see the out-of-the-nest Hillsong as an “associate church” of the ACC, continuing to learn from and support it but forgoing the rights of full-fledged membership.

So if things were going well, why the split?

“As Hillsong Church has continued to grow, we no longer see ourselves as an Australian Church with a global footprint, but rather a Global church with an Australian base—our global office now resides in the USA,” Houston wrote.

Pointing to the church’s increasing global footprint, with more constituents and churches outside of Australia than inside it, Houston wrote, “It has become clear to us that we need to be able to credential our own pastors and restructure our church in a way that enables us to give due diligence to governance, risk, church health, safe church, and many other policies that are crucial to the future progress of Hillsong, globally.”

Alcorn described the ongoing relationship between the ACC and Hillsong as “strong” and said both sides are committed to continuing partnership. He conveyed the shift in familial terms.

“In a way, this can be likened to a child who has grown up and now has a larger life outside the family home,” he wrote in an email to ACC pastors.

The change-up is the second major development for Australian charismatics in less than a month.

At the end of August, Scott Morrison was sworn in as Australia’s 30th prime minster. Apart from being the seventh prime minister since 2007, Morrison is also the first to be a Pentecostal. He also has close ties to the Hillsong movement.

From Morrison’s first speech to parliament back in 2008, he lauded the “great assistance” of Hillsong pastors, including Houston, and spoke of Australia not as a “secular country” but a “free country” in which secularism is just one of many options.

While Morrison has said the church will not direct his party policies, there is little doubt that such a high-profile Pentecostal on Hillsong’s home turf will draw attention to the movement.

Not that Hillsong has trouble attracting attention all on its own.

With all of its many ministries and megachurches, Houston calls his church “One House, with many rooms.” And as the number of rooms continues to grow, so too do potential complications in church authority.

Houston says that, with the help of the ACC National Executive, the church has worked to draft a new structure to define the relationship between the churches as a means of addressing the needs of expanding both in number and in geography.

“It is my great hope that the church in Australia will continue to be healthy and unified, and that more Australians than ever will come to faith in Jesus,” wrote Houston. “And it is my belief and my prayer that, by the grace of God, all our churches will continue to flourish and grow.”

Hillsong: ‘What a Beautiful Name’ for a New Denomination Spanning ‘Oceans’

Hillsong: ‘What a Beautiful Name’ for a New ...