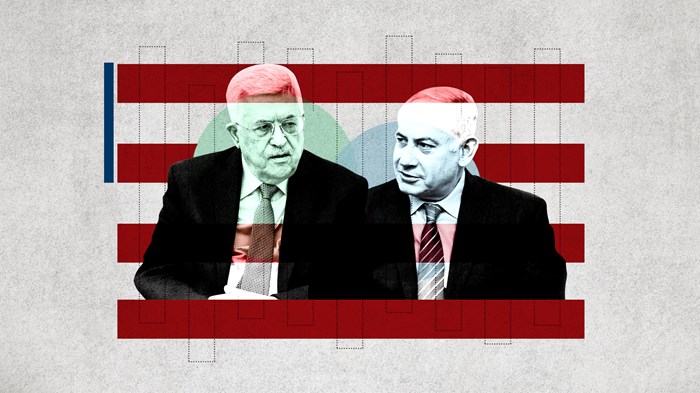 Politico Magazine recently profiled Telos, an evangelical group dedicated to changing the narrative on Israel. “Christian faith communities persistently advocate for one-sided postures towards the conflict,” states the group, whose name means purpose in Greek, on its website. “Our telos is the freedom, security, and dignity of every human being in the Holy Land.”

But the profile prompted a strong critique from Mark Tooley of the Institute on Religion and Democracy (IRD), who describes such “ambivalence” as actually harming both Israelis and Palestinians. Without solid evangelical support buttressing the US alliance with Israel, all sides will only entrench and deepen the conflict, he argues—making negotiation less likely.

“Impartiality and avoiding polemical stances are now de rigeur in much of nouveau Evangelicalism, so the Telos appeal has resonance,” he wrote on IRD’s blog. “Aren’t Christians supposed to be on everybody’s side?”

Pew’s new survey of 10,523 US adults aimed to measure exactly that.

For decades, Pew has asked which side Americans sympathized with more: Israel or the Palestinians? But this year, researchers recognized a problem: this approach compared a country with a people.

It was not apples-to-apples; nor did it allow for respondents to signal sympathy for both. So this year, researchers instead used separate questions asking about a favorable or unfavorable opinion toward the Israelis and the Palestinians as peoples, as well as toward their respective governments.

While the report focused on Republicans and Democrats, Pew broke out for CT the views of four Christian groups, as well as the religiously unaffiliated or “nones.” Respondents were categorized by the type of church they attend, instead of the common approach of self-identification.

About 1 in 3 evangelical church attendees (34%) reported favorable opinions of both peoples. 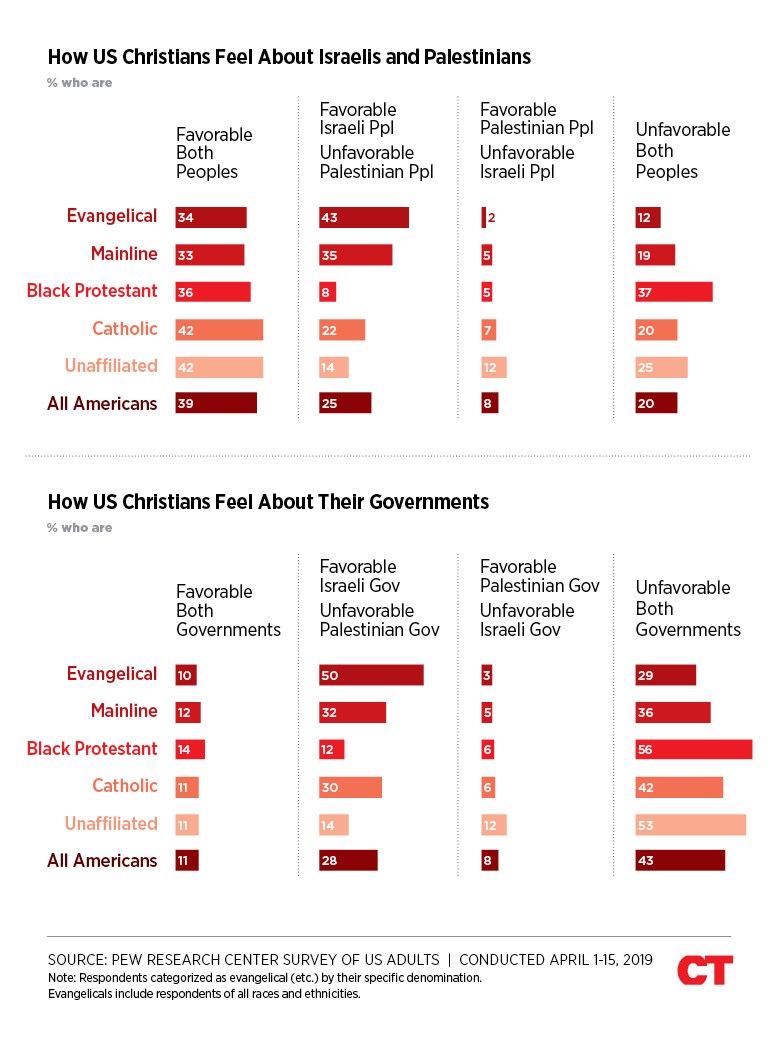 The share of mutual favor does not hold for the respective governments. 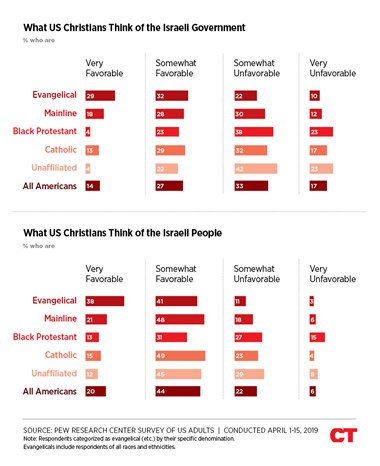 The results began to shift among Americans attending historically black Protestant churches and among the religiously unaffiliated or “nones”—particularly toward the Israeli government. 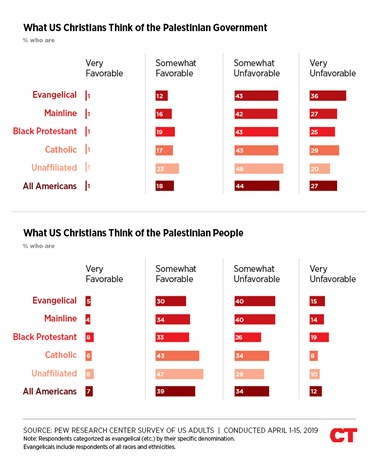 “The survey confirms evangelicals are the most pro-Israel demographic in the USA, so no major surprise,” Tooley told CT. “Of course most are reluctant to say anything negative towards a people. And some people might be negative toward Israel’s current government though still largely friendly to Israel.

“The poll indicates the greatest challenges for pro-Israel [advocates] in the USA are black Protestants and the non-religious,” he continued. “Black Pentecostals tend to be more Zionist, so I'm curious what percentage they were. Hispanic evangelicals also tend to be pro-Israel, so I’m sorry there are no numbers for them.” [Pew’s survey was unable to break out the responses of Hispanic Christians.]

“And it seems apparent from these latest poll numbers that a good number of Americans, including evangelicals, realize both Israelis and Palestinians are all made in the image of God and deserve to live in security with dignity and freedom,” he said.

Pew also asked about President Trump’s approach toward Middle East peace. His senior advisor Jared Kushner recently stated the long-awaited “Deal of the Century” would be released following the end of Ramadan in early June.

Overall, 50 percent of Americans believe Trump is striking the right balance, while 34 percent and 6 percent believe he is favoring Israelis or Palestinians too much, respectively. 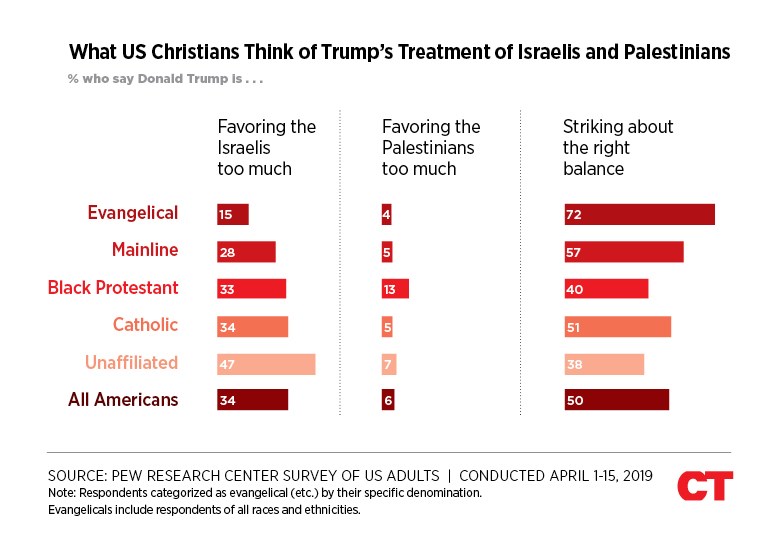 In addition to US evangelicals favoring Trump’s Israel policy more than US Jews by 15 percentage points in Pew’s followup analysis [May 6], a 2016 Pew survey also found striking opposites between US evangelicals and Israeli Christians: 8 in 10 (82%) white evangelicals believed God gave the land of Israel to the Jews, while only 19 percent of Christians actually born, raised, and living in Israel agreed. (This number includes Messianic Jews and Protestants, but reflects primarily the majority opinion of Arab Christians, both Catholic and Orthodox.) 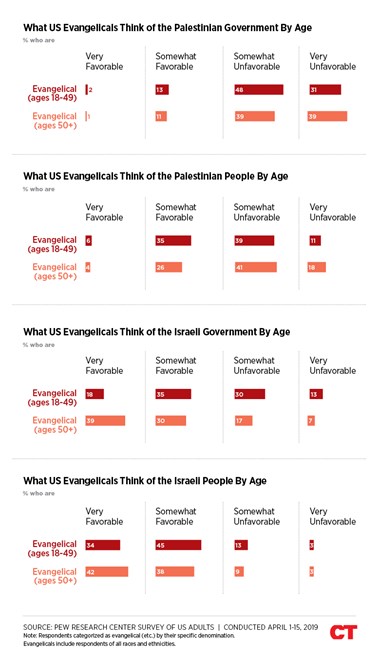 Pew also reported a generational gap: 77 percent of Americans ages 55 and older have favorable opinions toward the Israeli people. This percentage dropped to 63 percent for those between ages 18 to 29.

And while 43 percent of older Americans have favorable views toward the Palestinian people, this percentage climbed to 58 percent in the younger generation.

Pew could not break down religious affiliation according to these age ranges, but previous CT reporting noted how a LifeWay Research survey showed significant evangelical shifts on Israel.

And two-thirds of younger evangelicals said Christians need to do more to care for Palestinians. That drops to 54 percent among older evangelicals.

What do these trends necessitate?

Many American evangelicals still do, according to Pew. But one-third sympathize with Israelis and Palestinians together.

“As Americans come to care deeply about people on both sides of the Green Line,” wrote Telos, “we inspire and equip them … radically improving the way the United States relates to that part of the world.”

Here are Pew’s findings for all Americans: 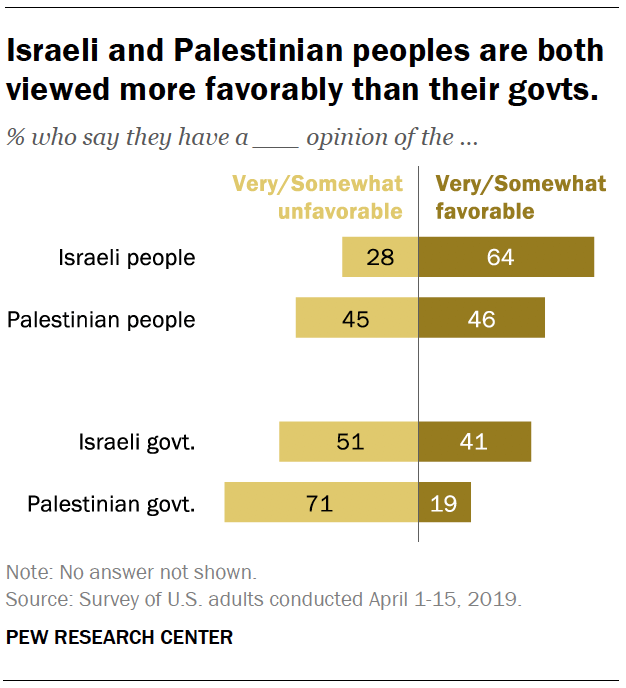 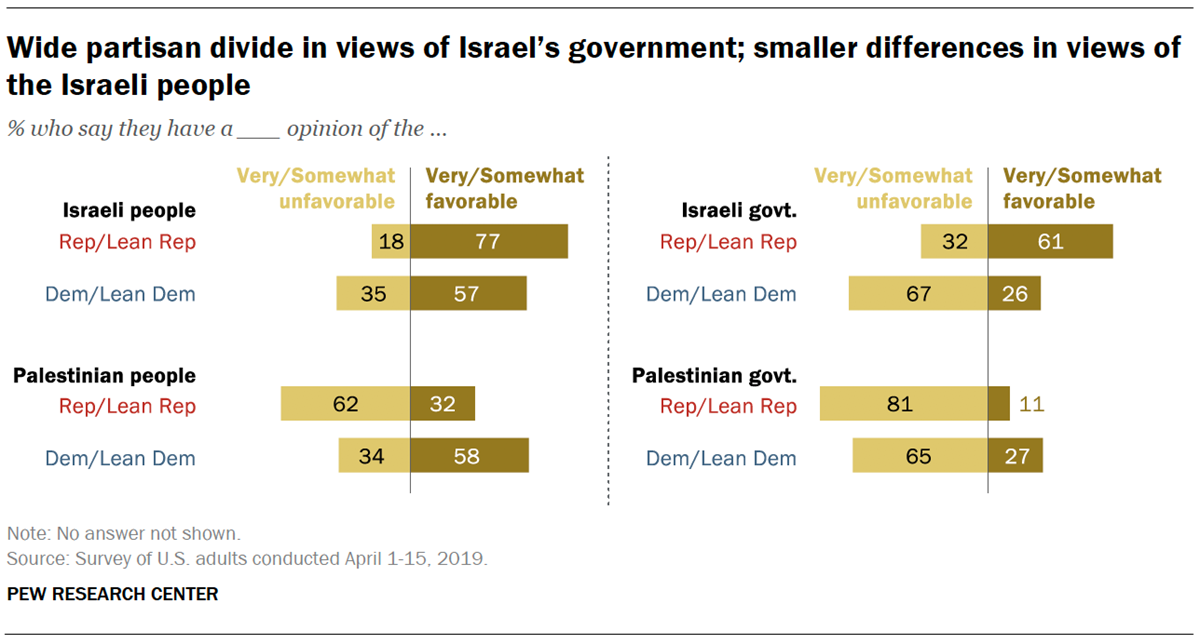 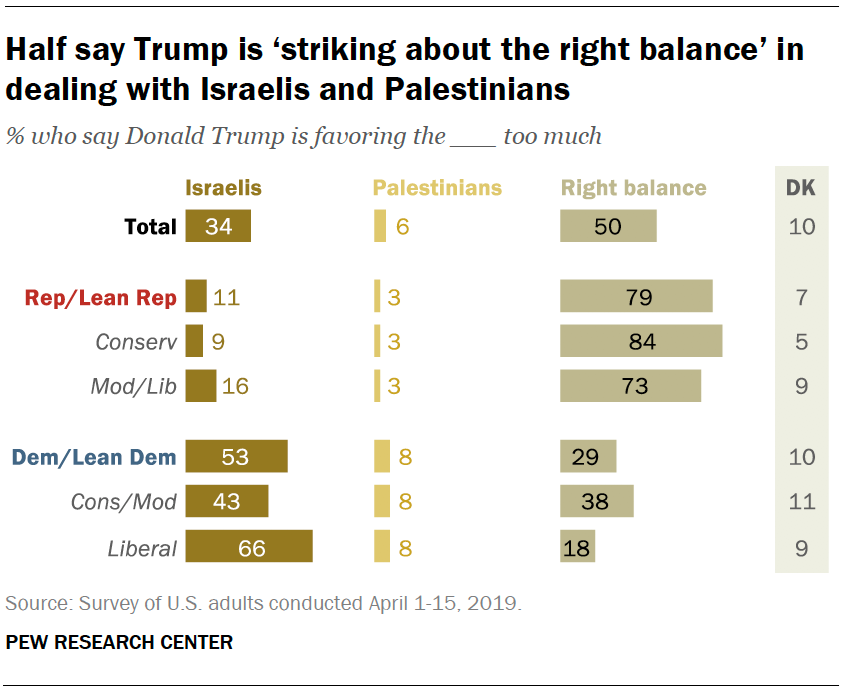 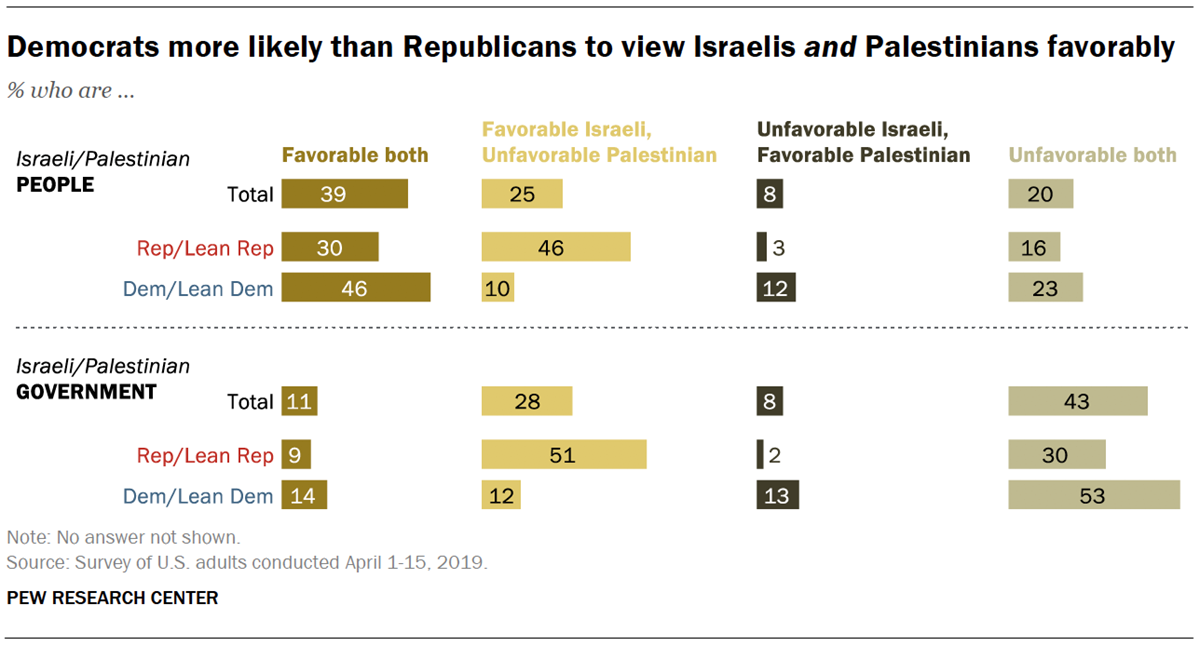 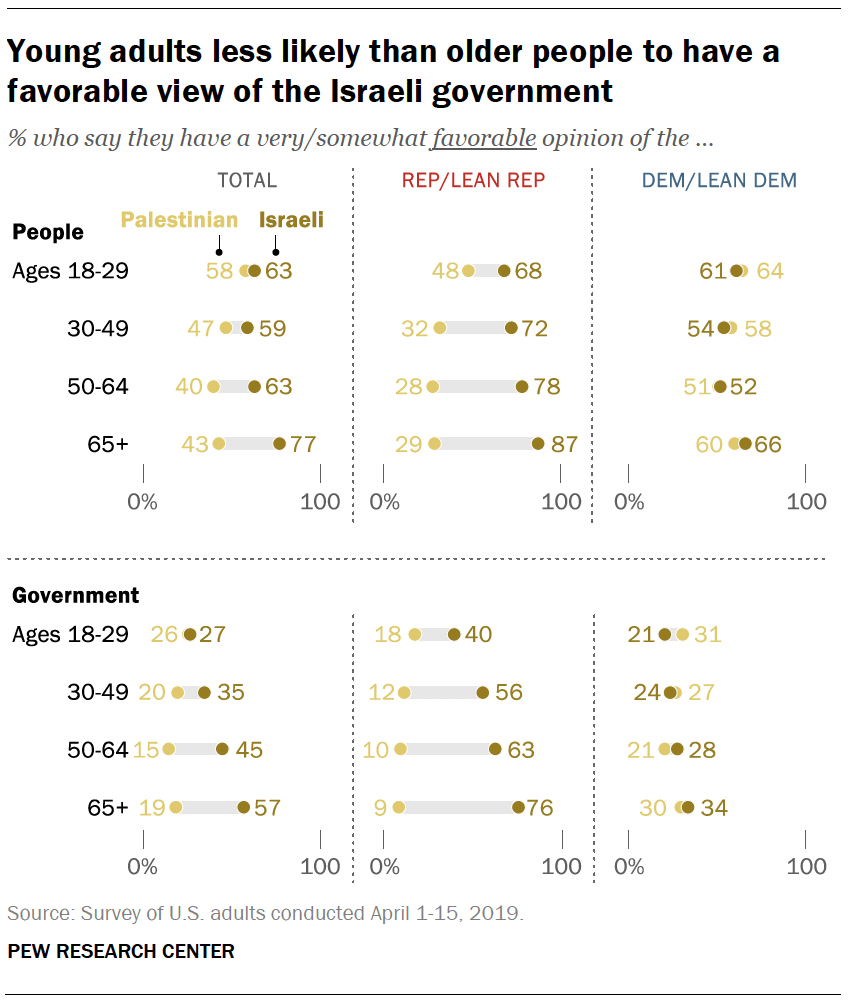 1 of 10
expand
Give Today
Christianity Today strengthens the church by richly communicating the breadth of the true, good, and beautiful gospel.
Learn more
© 2021 Christianity Today - a 501(c)(3) nonprofit organization.