Israeli Christians Think and Do Almost the Opposite of American Evangelicals

Israeli Christians Think and Do Almost the Opposite of American Evangelicals

New Pew survey finds big differences in political views and religious practices.
Sarah Eekhoff Zylstra|March 8, 2016 08:01 AM
Image: VnGrijl / Flickr
Church of the Holy Sepulchre
Israeli Christians Think and Do Almost the Opposite of ...

In 1949, the state of Israel was formed to be a haven for the world’s decimated and traumatized Jewish population after World War II. Ever since, American Christians have largely supported the modern-day Zion; in 2013, 82 percent of white evangelicals believed that God gave the land of Israel to the Jews.

In contrast, only 19 percent of Christians actually born, raised, and living in Israel believe that God gave the land of Israel to the Jewish people. Significantly more than half (66%) believe this is not literally true, while another 9 percent don’t know what to think.

The numbers come from a new comprehensive study of Israel by the Pew Research Center, which included enough self-identified Christians (468) to statistically break out their views. The numbers were weighted and adjusted, because Pew found that only 2 percent of Israel’s population in 2015 was Christian, down from 3 percent in 1949. (Pew’s survey includes Arab residents of East Jerusalem, but not those of Gaza or of the West Bank outside of East Jerusalem.) 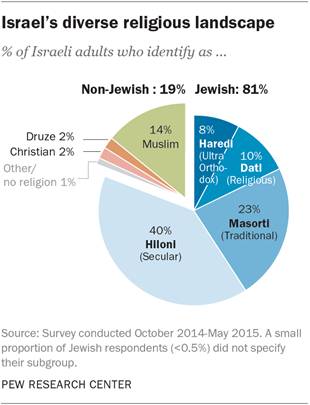 Those Christians are largely split 50/50 between Catholic and Orthodox believers. Protestants and Messianic Jews both made up fewer than 0.5 percent of Israel’s population, and thus were too negligible to be broken out separately in the survey results (though they are included in the totals pertaining to all Christians).

Though all of the Christians surveyed were born in Israel (or East Jerusalem), their small numbers and heritage (96% are Arab) distance them from the country’s Jewish identity.

For example, the majority of Israeli Christians (72%) believe Israel cannot be both a democracy and a Jewish state, though most Israeli Jews (76%) believe it can be fully both. 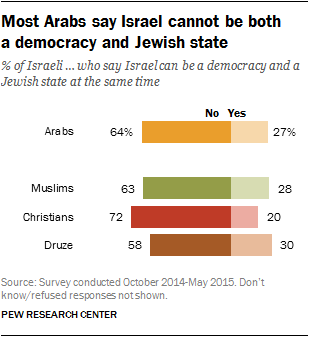 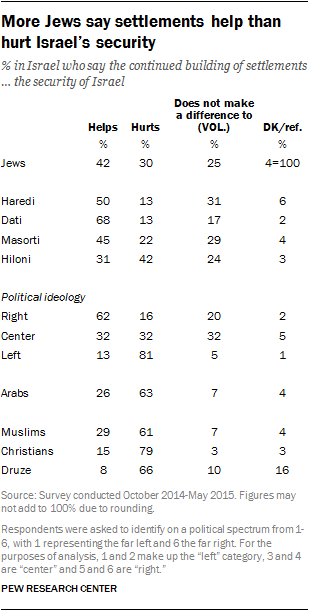 While a plurality of Christians (45%) believe that Israel and an independent Palestine could coexist peacefully, about a quarter (24%) believes a two-state solution is not possible.

Though the Palestinian conflict draws the most attention in America, Israelis in general (40%) and Israeli Christians (41%) were more likely to say that Israel’s greatest long-term challenge is economic. About a third of all Israelis (36%) and Christians (31%) said that threats of violence or terrorism were Israel’s biggest problem.

Pew asked Christians to self-identify, and respondents in Israel split about evenly among those for whom their Christianity was a matter of religion (31%), ancestry and culture (34%), or a combination of both (34%).

Heritage plays an important part in Israeli Christianity: 99 percent of Christians were raised that way, and 99 percent married another Christian (though Protestants face challenges). Almost 9 in 10 Christians said they have “a strong sense of belonging to the Christian people” (89%), and nearly the same percentage said all or most of their close friends are also Christians (86%).

Most Christians say that their faith is very important (57%) or somewhat important (34%) to them, though fewer pray daily (34%) or attend church at least weekly (38%). More believe that many religions can lead to eternal life in heaven (48%) than that Christianity is the true faith leading to eternal life (43%). 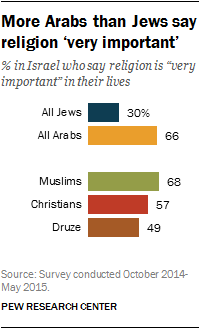 In comparison, more American Christians (68%) and evangelicals (79%) report praying daily and attending church at least once a week (47% of Christians, 58% of evangelicals).

Among Pew’s other findings:

CT’s coverage of Israel, Palestine, Zionism, and Jewish-Christian relations includes why Christian education could vanish in Israel, how identity politics are squeezing Arab Christians, and a new effort by Messianic Jews and Palestinian Christians to model how believers should disagree.

Israeli Christians Think and Do Almost the ...