A historic vote for Donna Barrett as general secretary “has been meaningful for many women who feel God’s calling on their lives.”
Megan Fowler|August 8, 2019 08:42 AM 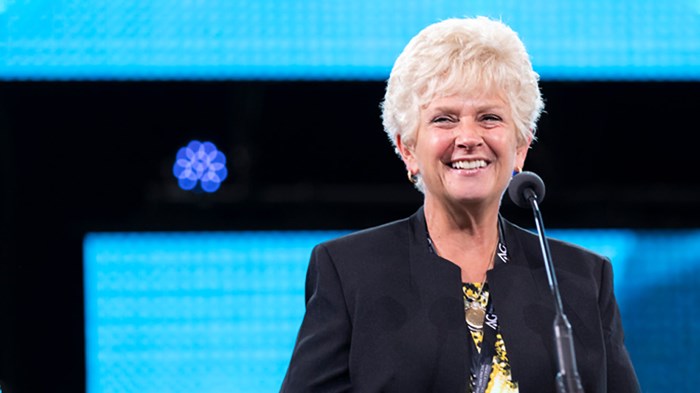 Image: The Assemblies of God (USA)

For the first time in its 105-year history, the Assemblies of God (AG) General Council has elected a woman to its executive leadership. Ohio minister Donna Barrett was voted in as AG general secretary during its biennial gathering last Friday.

Barrett had been appointed to the post last year—the third-highest position in the denomination—after her predecessor resigned in the middle of his term. She is now both the first woman to fill a seat on the AG’s six-person executive leadership team and the first woman elected by its ministers to such a position for a four-year term.

As general secretary for a denomination that claims 3.2 million adherents and over 13,000 churches in the US, Barrett oversees the credentialing of ministers, church chartering, church statistics, and the world’s largest Pentecostal archive, located at AG national headquarters in Springfield, Missouri.

Her nomination at age 59 comes as the denomination grows younger and more ethnically diverse. According to its own statistics, over half of AG adherents are under 35, and more than 43 percent ethnic minority.

“The gifts God gives sometimes end up in a container [that looks] different from what people are used to seeing and different than history,” Barrett said in her acceptance speech. “And the gifts that I have seem to be aligned with this position greater than any other ministry assignment I’ve had from the Lord in my past.”

Barrett’s nomination came from Doug Clay, who holds the AG’s top leadership position as general superintendent. In a statement emailed to CT, Clay said, “Through her service as a church planter, district leader, and general presbyter, Donna Barrett has shown humility paired with a special gifting for leadership.”

“The Assemblies of God affirms women at every level of leadership,” he said. “While Donna was not selected on the basis of her gender, I know her executive leadership has been meaningful for many women who feel God’s calling on their lives.”

Since its founding in 1914, the AG has endorsed women preaching and leading in ministry, and 24 percent of AG ministers in the US are women, compared to fewer than 9 percent among Protestant pastors overall.

In 2010, the Pentecostal body officially opened its top leadership spots to women, with a position paper stating, “We conclude that we cannot find convincing evidence that the ministry of women is restricted according to some sacred or immutable principle.”

The AG’s position on women in ministry has not historically resulted in women rising to the top levels of the denomination, and fellow Pentecostal bodies like the Foursquare Church have seen a similar struggle.

Last May, Foursquare voted on a historic female presidential candidate, the only woman in its executive leadership, Tammy Dunahoo. Theologian Leah Payne suggested that because women have far more models of female pastors and congregational leaders than regional and national leaders, it can be harder for them to see themselves in bigger roles and advance in their denomination.

In the Assemblies of God, it was only after the General Council mandated that a woman be included among its executive presbyters that Beth Grant became the first woman to fill the spot in 2009, joining the group of 21 leaders who function as the AG’s board of directors. It took another decade before the AG elected a woman to serve on the executive leadership team.

Grant was just reelected for another term, now one of three female executive presbyters. “I see God doing a new thing among women,” Grant said at the General Council, with more than 22,000 people in attendance. “It’s a great day. Ladies, step up, step in, step out.”

“Could not be more thrilled to witness the election of this called, highly qualified, godly woman as the General Secretary of the Assemblies of God!” wrote Jodi Detrick. “You have both my deep admiration and my prayers.”

Since becoming an AG minister in 1988, Barrett, who is single, has served as a church planter, associate pastor, and youth pastor at churches in Ohio.

She has also served in leadership at the state level as an Ohio Ministry Network executive presbyter and is the author of Leveling the Prayer Field: Helping Every Person Talk to God and Hear from God. She founded and pastored Rockside Church in Independence, Ohio, for 16 years before her general secretary appointment.

“I hope the model that has been set at the national level will drizzle down throughout our districts with the message that men and women can work shoulder to shoulder as ministerial colleagues much like we see from our church members in the professional world,” Barrett said last year. “I hope young girls will be able to look up on the platform and see someone they can identify with. Many of our churches still have an all-male board.”

The AG’s position in favor of female leadership in the church puts the denomination in the minority among fellow evangelicals. Just 39 percent of evangelical Protestants say they are comfortable with a female pastor, according to a Barna Research survey.

The Assemblies of God has been seen as an exception to the denominational decline experienced by other Protestant groups in the US over the past couple decades; the AG continues to grow in number of churches and average attendance, John Davidson, director of discovery and development for the General Council of the Assemblies of God, reported.