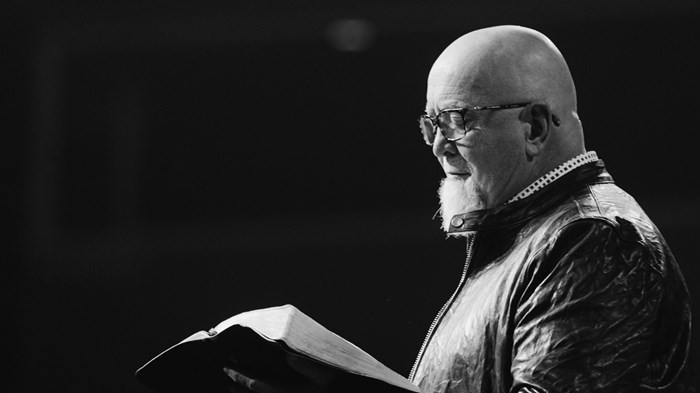 In the midst of efforts to reconcile with longtime critics, Harvest Bible Chapel fired its founder and senior pastor James MacDonald for “engaging in conduct … contrary and harmful to the best interests of the church.”

Harvest elders announced this morning that they were forced to take “immediate action” on Tuesday to end his 30-year tenure.

“Following a lengthy season of review, reflection, and prayerful discussion, the Elders of Harvest Bible Chapel had determined that Pastor MacDonald should be removed from his role of Senior Pastor. That timeline accelerated, when on Tuesday morning highly inappropriate recorded comments made by Pastor MacDonald were given to media and reported,” they wrote.

“This decision was made with heavy hearts and much time spent in earnest prayer, followed by input from various trusted outside advisors.”

MacDonald took an “indefinite sabbatical” in January, following a tumultuous few months defending Harvest in a defamation lawsuit against its critics and in the aftermath of a World magazine investigation into mismanagement at the church.

The public scrutiny continued with pushback against MacDonald’s decision to preach at a Harvest affiliate in Florida during his sabbatical. Then, a famous friend of his, Chicago shock jock Mancow Muller, spoke out in a local newspaper against the manipulation and ego he observed around MacDonald’s “cult of personality” at Harvest. On his radio show, Muller later aired what sounded like clips of MacDonald making harsh comments toward media who had covered the story.

Now, the church has decided its longtime leader won’t be coming back.

Muller had prematurely announced the pastor’s departure on Friday morning on his show on WLS 890 AM, going on to declare on Twitter, “Conman Boss James Macdonald OUT of Harvest Church!”

The news came less than a week after another update from Julie Roys, a defendant in the lawsuit and the writer responsible for the World investigation, who has continued to release evidence against MacDonald and call for his resignation.

“While I am heartened that the elders finally removed MacDonald, he should have been fired five years ago. That’s when eight former elders sent a letter to the sitting elder board, warning them that MacDonald was disqualified for office,” she said in a response posted Wednesday.

Though MacDonald initially opted to step away from all preaching and leadership roles at the church’s Chicago-area locations, in his January 16 sabbatical announcement he suggested he might still preach at a Harvest congregation in Naples, Florida, which led to another saga.

The leader of that church, John Secrest, was blindsided by the news and asked Harvest elders to reconsider allowing MacDonald to preach there. He ultimately requested that Harvest Naples be released from its relationship with the megachurch. Then, he was fired, according to the Daily Herald, a suburban Chicago newspaper.

Secrest, who founded the church in 2016 and affiliated with Harvest last September, said he didn’t know at the time about the ongoing concerns raised about MacDonald’s leadership and the church’s financial status, which led to Harvest’s lawsuit last year. “The good intentions of our ministry partnership with Harvest Chicago have been overshadowed by these developments,” he said.

Even before the 58-year-old pastor’s sabbatical, MacDonald’s role at Harvest had shifted. At the start of the year, elders stated that his “primary focus has transitioned from building our ministries to securing a healthy succession that sets all our ministries up to flourish in the next generation.”

Two years ago, MacDonald moved away from overseeing the Harvest Bible Fellowship, a global network of churches, which eventually separated from Harvest completely to form the Great Commission Collective (GCC).

The former Harvest Bible Fellowship leaders now at GCC—which contains about 130 churches, more than half of which still have Harvest in their names—share concerns about the church’s leadership and are looking for transparency and repentance from MacDonald.

“In keeping with our past private statements to Harvest’s leadership and to our pastors—The primary issue is not reconciliation or peacemaking, it is repentance,” GCC elders said in a January 17 statement.

“A peacemaking process, while helpful for personal and relational reconciliation, is not the approach to address failed governance, biblical disqualification, and a toxic leadership environment.”

Muller, who has attended Harvest for five years and developed a friendship with MacDonald, wrote in a Daily Herald op-ed that he’d seen the best the church had to offer: MacDonald’s punchy sermons renewed Muller’s faith, brought his family back into Christian community, and taught him the truth of the gospel.

However, he ultimately agreed with the wave of backlash his pastor-friend now faced, condemning how MacDonald’s drama had overshadowed Harvest and threatening a class-action lawsuit yesterday if MacDonald remained its pastor for another week.

“Pray for those of us who donate 10 percent of our income and would like to know where the money really goes. Pray for those outside the faith who will never come to salvation because of how this appears to them,” Muller wrote in his op-ed. “For a great many, it's time for the cult of personality of James MacDonald at Harvest chapter to close and the actual Bible to be opened again.”

Today on his edgy radio show, Muller said while he felt MacDonald’s firing had to happen, he also had “wanted nothing to do with any of it” and now “my part is done.”

“I feel like God was using me in this,” he said. “I hope it doesn’t chase people away from their spiritual quest—away from God.”

“I take no joy in this announcement,” said Muller. “But I hope the healing can begin, and I hope the abuse will stop.”

“Lastly, we need to comfort hurting today,” she wrote. “I know many people who attend Harvest or who have been impacted by MacDonald’s preaching are crushed today. As one person whom MacDonald led to the Lord remarked to me, ‘It’s like finding out your wife is a serial killer.’ The disillusionment, betrayal, and loss can be excruciating. This is a very vulnerable time for a lot of people and I am sure God weeps for every single wounded soul.”

Harvest numbers 13,000 attendees across seven locations, and the church began affiliating with the Southern Baptist Convention in 2015. In addition to leading Harvest, MacDonald acquired a massive evangelical following through his books, Bible studies, and Walk in the Word radio program, with more than a million fans on Facebook.

In announcing MacDonald’s termination, Harvest elders stated they are “committed to fulfilling our fiduciary duty as the leadership of this congregation, knowing that at times the outcome may be misunderstood or emotionally painful. … We sincerely thank you for your prayers, your support, and your patience as we work together to restore a trust in leadership, a humility to surrender to biblical authority, and a firm resolve to move forward as a church family.”