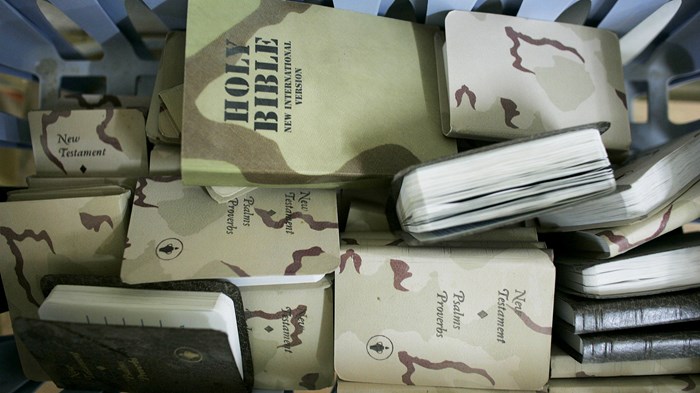 In the wake of a Supreme Court decision permitting a cross to remain on a public highway, the Department of Veterans Affairs has revised its policies on religious symbols in displays at VA facilities.

“We want to make sure that all of our Veterans and their families feel welcome at VA, no matter their religious beliefs. Protecting religious liberty is a key part of how we accomplish that goal,” he said in a statement.

“These important changes will bring simplicity and clarity to our policies governing religious and spiritual symbols, helping ensure we are consistently complying with the First Amendment to the US Constitution at thousands of facilities across the department.”

The revised policies “allow the inclusion in appropriate circumstances of religious content in publicly accessible displays at VA facilities.”

They also permit patients to request and be provided with sacred texts, symbols and religious literature during treatment at facilities or visits to VA chapels. And they allow the VA “to accept donations of religious literature, cards and symbols at its facilities and distribute them to VA patrons under appropriate circumstances or to a patron who requests them.”

The announcement noted the Supreme Court’s June 20 decision, in which it permitted the so-called “Peace Cross,” a World War I monument in Bladensburg, Maryland, to remain in a traffic circle. The VA said the case “reaffirmed the important role religion plays in the lives of many Americans and its consistency with Constitutional principles.”

The policy revisions, announced July 3, come two months after a US Air Force veteran filed suit against the director of the Manchester (New Hampshire) VA Medical Center, seeking the removal of a Bible from a POW/MIA table at that facility.

“As a Christian, he respects and loves all his military brothers and sisters and does not want to be exclusionary by the placement of the Christian Bible,” the suit states.

The Military Religious Freedom Foundation, which the suit says received complaints from 14 other veterans about the display, decried the VA’s revamped rules.

“These brand new VA policies — clearly based upon the US Supreme Court’s recent, idiotic decision in the Bladensburg Cross case — are nothing more than a transparent and repugnant attempt to further buttress and solidify fundamentalist Christianity as the insuperable official religion of choice for the VA, our Armed Forces, and this country,” said MRFF President Mikey Weinstein.

The MRFF has previously complained about similar Bible displays at other locations, such as a naval hospital in Japan and a Wyoming Air Force base.

First Liberty Institute, a nonprofit legal organization that sent a letter in May to Wilkie requesting “a VA-wide policy that permits Bibles to be included in POW/MIA remembrance displays,” applauded the VA’s revamped policies.

“The Supreme Court recently upheld the constitutionality of religious displays with historic roots such as those commonly found in VA facilities. We commend the VA for taking this necessary and positive action.”