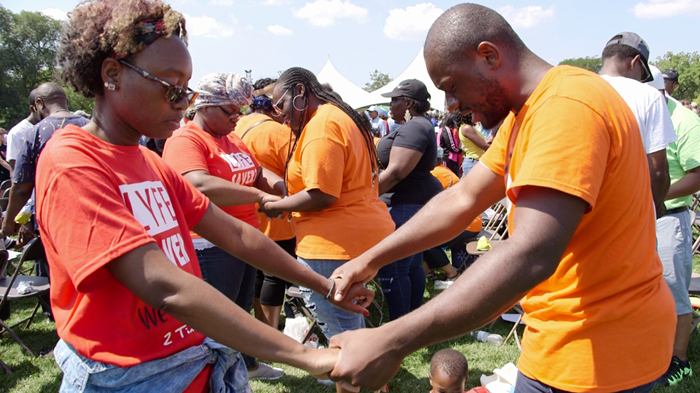 Image: Courtesy of Becket
Pastor Chris Butler (right), who intervened in the housing allowance lawsuit, during a prayer walk in Chicago.

For the second time, a popular tax break for pastors has been judged permissible under the US Constitution, despite efforts by an atheist legal group to prove otherwise.

Offered only to “ministers of the gospel,” the 60-year-old tax break excludes the rental value of a home from the taxable income of US clergy, CT previously reported. GuideStone Financial Resources has called it the “most important tax benefit available to ministers.”

The allowance is currently claimed to the tune of $700 million a year, according to the latest estimate by the congressional Joint Committee on Taxation.

The October 2017 decision by Wisconsin district judge Judge Barbara Crabb had been a victory for the Freedom from Religion Foundation (FFRF), which “jeopardized the benefit for clergy in Illinois, Indiana, and Wisconsin … and many predicted similar consequences nationwide,” wrote CT’s sister publication, Church Law & Tax (CLT) in an analysis.

“FFRF claims Section 107(2) renders unto God that which is Caesar’s,” wrote circuit judge Michael Brennan. “But this tax provision falls into the play between the joints of the Free Exercise Clause and the Establishment Clause: neither commanded by the former, nor proscribed by the latter.”

The FFRF told the Associated Press it is reviewing its options.

CT previously reported how the FFRF challenged the same tax break in 2012 with the same initial success, but ultimately lost on appeal in November 2014. Today’s ruling was essentially a rematch over whether the tax benefit unfairly benefits religious Americans.

“This ruling is a victory not just for my church but for the needy South Side Chicago community we serve,” said Chicago Embassy Church pastor Chris Butler in a Becket press release. He intervened in the case because his church “can’t afford to pay him a full salary, but it offers him a small housing allowance, so he can afford to live near his church and the community he serves,” noted Becket, which represented a group of pastors appealing the FFRF’s initial victory.

“I am grateful that I can continue serving them and living side by side with them,” said Butler.

CLT offers some initial reactions, including from editorial advisor and CPA Michael Batts. “This news comes as a relief to churches and clergy across America,” he said. “Of course, given the possibility of further consideration and appeals, we’re not quite to the point in the story where we can say ‘and they all lived happily ever after.’”

CT previously examined debate over whether or not Congress should change the rules on pastor housing allowances.