Pakistani asylum seekers in Negombo fled terrorist attacks in their home country, only to fear retribution for more deadly violence in their place of refuge.
Kate Shellnutt|May 3, 2019 09:00 AM 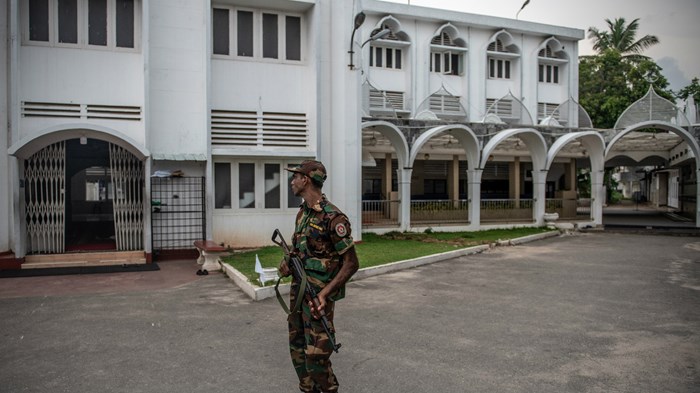 Fleeing persecution in Pakistan, Christians and other religious minorities once found refuge in Negombo, a heavily Catholic area north of Sri Lanka’s capital. But ever since the deadly Easter bombings—the worst taking place at the town’s St. Sebastian Church—these Pakistani asylum seekers have once again had to leave their homes and neighborhoods in search of safety from threats of violence.

Since some instances of retaliatory violence or threats in the Southeast Asian island nation have targeted Pakistani and Afghan nationals, hundreds of families have been forced out by landlords worried about further attacks or have left on their own to find temporary protection in crowded government buildings, mosques, or other locations.

At least 60 Christian asylum seekers camped outside the Negombo police station after being evicted, according to the British Pakistani Christian Association. Others joined several hundred Ahmadi Muslims who took up shelter at area mosques, some helped to safety by their Christian landlords, Human Rights Watch reported.

“It is a blight on their country that innocent victims are being persecuted, especially as many of those who are being targeted have already suffered a similar fate in their homeland,” said Wilson Chowdhry, chairman of the BPCA.

The tragic attack that left 250 dead in Sri Lanka—now blamed on an Islamist terror group—may ring familiar to Pakistani believers, who suffered an Easter Sunday bombing that killed more than 70 people just three years before.

“I appeal to the Christians and other communities of Negombo to stand strong in the face of such provocation and to extend love instead of hate,” said Chowdhry, whose organization said it has covered food costs for the displaced families.

Christians—less than 10 percent of the population in the mostly Buddhist country—have wanted to help arrange housing for the asylum seekers, but anywhere they move to ends up becoming a target. (Rumors suggested the bombers were Pakistani or Afghan.)

Some individuals have opened their homes to Pakistani families. One effort to offer up a Christian center for their use ended up being rescinded due to safety concerns. Churches across the country have amped up security and canceled services following the attacks.

“We tried to think of so many places, but security was an issue,” Godfrey Yogarajah, general secretary of the National Christian Evangelical Alliance of Sri Lanka and associate general secretary of the World Evangelical Alliance, told CT. “Emotions are running high, and wherever they are taken, the area people are getting agitated and trying to harm them.”

Pakistanis make up the vast majority of all asylum seekers and refugees in Sri Lanka, with more than 1,100 living there in 2018, according to the United Nations High Commissioner for Refugees (UNHCR). Most are Ahmadi Muslims, a minority sect that is barred from claiming Islam in Pakistan; the rest are Christians, who have also faced persecution under the Islamic Republic.

The number of Pakistanis that fled to Sri Lanka jumped from fewer than 200 in 2012 to 1,400 in 2014. These religious minorities, desperate to escape Taliban violence such as the 2013 bombing of All Saints Church in Peshawar, left their homes for nearby countries whose easy visa policies would let them in. Around the same time, nearly 10,000 made their way to Thailand, which houses the most Pakistani asylum seekers in the region.

In Sri Lanka, many settled in Negombo, where St. Sebastian Catholic Church once offered worship services in Urdu and arranged informal classes for Pakistani children, though efforts paused as the country began detaining and deporting some of the refugees.

CT recently featured the story of Arooj Nirmal, a Pakistani refugee to the US whose husband also left their home but is still waiting for his approval to come join her:

Four years I waited in Sri Lanka for my refugee application to be approved. I spent every day just surviving. In 2013, shortly after I arrived, the Sri Lankan government began deporting Pakistani refugees. This tension has since eased, but back then we were literally being chased in the streets, rounded up, and sent back to Pakistan. We were helpless, unable to work, vulnerable in every way. I spent most of my time hiding in churches and was never caught, thanks to their kindness.

Prior to the Easter attacks and threats of retribution, the government was tolerant toward the refugees and the general population ambivalent, according to Tony Senewiratne, a former Youth for Christ leader who now serves as national director for Habitat for Humanity.

But attitudes toward asylum seekers have shifted to “mixed feelings with the negative in ascension,” he told CT.

Senewiratne is involved with one of the major resettlement agencies in Sri Lanka, ZOA Refugee Care, and has called on the government to secure a safe site for the Pakistanis before more violence breaks out, calling it “the only viable solution.”