Mike Riddering died in the attack that brought about a new era of terrorism in the West African country. Now his relatives are working to bring about revival.
Maria Baer|May 23, 2019 08:00 AM 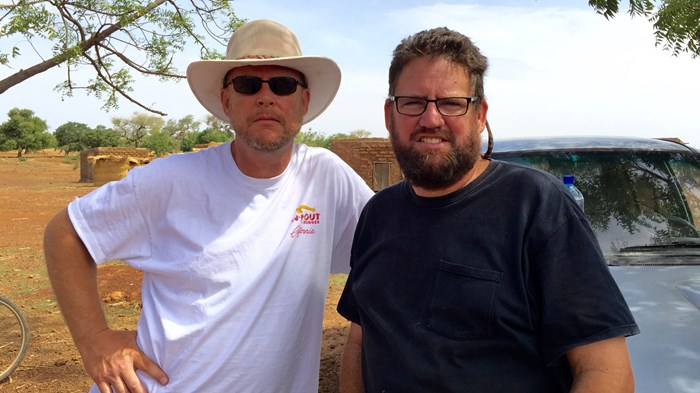 Burkina Faso used to be one of the most peaceful nations in the world. The small West African country of about 19 million people has seen a handful of coup d’etats over its short life, not unlike many of its neighbors, but is consistently ranked among the most conflict-free nations in the world, according to the Global Peace Index.

But that changed quickly just a few years ago when Islamist violence began to surge, starting with a shocking attack in Ouagadougou, the nation’s capital. On January 15, 2016, 28 civilians were killed by terrorists who opened fire at a cafe and then a hotel across the street. Among them was 45-year-old US missionary Mike Riddering.

Since the attack that killed Riddering, the violence has skyrocketed. There have been 230 attacks in three years, killing 65 people last month alone. In just an eight-day span starting in late April, gunmen killed 10 people in two separate attacks on Catholic worshipers and six people in an attack on an Assemblies of God church.

Islamists—including a coalition of al-Qaeda affiliates—are gaining momentum in the region. Earlier attacks, including the one that killed Riddering, were focused more generally on civilians. But World Watch Monitor (WWM) reported last week that the violence is becoming more focused on Christian villages and churches. A spokesperson for the Federation of Evangelical Churches and Missions told WWM that several pastors near the country’s border with Mali have fled the area and that a handful of churches have closed down.

The recent church attacks give Jeff pause, but not enough to stop him from buying one-way tickets from St. Louis to Ouagadougou.

“At this point, God would have to stop me from going,” the 55-year-old pastor said. “And I’m not 100 percent sure what that would look like.”

The Ridderings’ unlikely route to Burkina Faso started nearly 20 years ago, when a woman in Jeff’s congregation took a trip to the small, Muslim-majority country to visit her daughter in the Peace Corps. She came back with stories of orange dirt and a nation of people in need of Christ. With her pastor’s help, she moved to Burkina Faso to start a ministry that helps women and children in the country.

In 2011, Mike and his wife moved to Burkina Faso and eventually took over the ministry there. Jeff remembers Mike telling his family after his move that he planned never to leave again, that he would be buried there. “Obviously that came a lot sooner than we thought. And he thought,” Jeff said.

After Mike’s brutal death—and he was indeed buried there—his wife told media, “God did not only call Mike to Burkina Faso; he called me, too,” and the work has continued.

There are new logistical difficulties that come with being potential terrorist targets. Despite that inconvenience, the risk to their own lives, and the loss of Mike, their family members say they do not harbor any anger toward the people of Burkina Faso. Including the Muslim faithful. Including the terrorists.

“You can’t go into a Muslim country and have any ill will toward Muslims,” Jeff said. Jesus pleads with his followers to love their enemies in Matthew 5, but “the actual truth is, they’re not our enemies. We are all sons of our heavenly Father, which makes us brothers.”

Things weren’t always this way in Burkina Faso. Jeff has been visiting churches there since his first trip in 2000. Roughly 30 percent of the country’s population is Christian, according to USAID estimates. About 20 percent are Catholic, and the Assemblies of God is the largest Protestant denomination.

Less than a year before his brother’s death, Jeff gave a sermon before an Assemblies of God congregation in the country and felt led to talk about Jesus’ promise that his church would be persecuted.

Starting with Mike’s death, the terrorist attacks have been a wake-up call.

Since the violence has spread, pastors have told him that their pews are filling faster, and they are seeing more people come to Christ. “If you think about churches being attacked, you would think that churches would have less attendance,” he said. But “many people very quickly are making decisions for Christ.”

Jeff spoke via text message last week with a regional pastor who oversees 195 churches. He told Jeff that despite the violence against churches, he believes he’s seeing something of a Christian revival. That the persecution, while frightening, is serving to sharpen people’s faiths. Jeff remembers getting the same impression during his most recent visit to Burkina Faso last July.

Before the attacks, a 2013 study by researchers at Gordon-Conwell Theological Seminary found that Burkina Faso had the 12th fastest-growing Christian population in the world. Jeff plans to build on the momentum by continuing his brother’s work to support local pastors in discipleship and evangelism.

Shortly before his death, Mike met a struggling pastor with a fledgling congregation in a small village. Mike began supporting the village in whatever ways he could. He helped raise resources for a new well, which quickly became four new wells. He helped with the church building. He helped distribute clothes in the area; he helped facilitate a medical clinic for the people living there.

Soon, Jeff says, residents in the village found they were having to travel to the church almost every day of the week to get something they needed. Those visits proved fertile ground for new relationships with Jesus, and in roughly two years, the village of about 2,000 people—once mostly followers of a local animist religion—became a majority Christian village.

Jeff said his brother spoke to him in a dream eight months after he died. He said four words to him: “Jeff, continue my ministry.” He hopes this upcoming discipleship-training initiative, through a new nonprofit called My Brother’s Keeper Ministries, will follow Mike’s request.

For decades, the people of Burkina Faso have faithfully joined in the work the ministry Mike and his wife led. Now, he says, he wants to help them launch a work of their own and has formed initial partnerships with 15 pastors.

Especially in an era of terrorism, which could quickly drive international missionaries back home, it’s more sustainable to train local pastors to become missionaries in their own country.

The World Evangelical Alliance (WEA) recently reported that the recent attacks “indicate an intensification of Islamist violence on the Christian community in Burkina Faso.” WEA leaders are calling on the government and international partners to address the radicalization that had destabilized the region and made Christians a target.

Jeff Riddering remains mindful of the risks of journeying to a country just as terrorist violence spikes. “I’m constantly evaluating it,” he said. He doesn’t want to put his wife in harm’s way.

But he remains mindful, too, of the gospel. That without a life with Christ, the Burkinabé won’t spend eternity with Christ, nor will the Islamists responsible for the attacks. “That’s the motivation to share the Good News,” he said. “Even with people who could kill you.”

As Violence Escalates in Burkina Faso, Family of ...