During this year’s event in Charlotte, evangelicals are praying inside, outside, and remotely.
Kate Shellnutt|August 25, 2020 11:46 AM 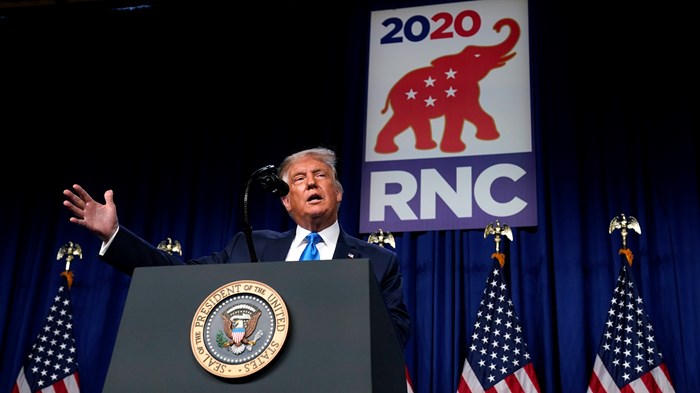 Three and half years after offering a prayer at President Donald Trump’s inauguration, New York Cardinal Timothy Dolan opened the Republican National Convention—which had officially nominated the president to run for a second term—by praying for America Monday night.

His prayer mentioned both parties and spanned a litany of issues around this election, saying “pray we must” for COVID-19 patients, frontline workers, police, babies in the womb, immigrants, trafficking, religious liberty, democracy, and the electorate preparing to vote.

The convention speeches and panels, convened to make a case for Trump’s reelection, were also punctuated with mentions of prayer and freedom to worship, a sign that—like at the Democratic National Convention the week before—faith remains a guiding factor for how Republicans approach the 2020 race.

On the broadcast airing Monday night, a Montana businesswoman described desperately praying for the Lord’s guidance before receiving a Paycheck Protect Program loan to support her coffee shop during the pandemic. Attorney and Trump advisor Kimberly Ann Guilfoyle gave a passionate speech in favor of Trump’s vision for a country where “we kneel in prayer and we stand for our flag.” Football great Herschel Walker mentioned praying for his friend, the president: “I pray every night that God gives him more time. Give him four more years.”

During presidential election years, “I watch the key points of both conventions to help me know how to pray for our country and make sure Christians are involved,” said Greg Laurie, pastor of Harvest Christian Fellowship, who has visited the White House multiple times under Trump and applauded outreach to evangelicals. “We need to both think and vote biblically. I encourage every believer who cares about the future of our country to do the same.”

Chaplains from the Billy Graham Evangelistic Association (BGEA) have been on the streets offering prayer around the Charlotte, North Carolina, convention center that’s hosting a downsized version of the GOP event. BGEA president Franklin Graham is scheduled to offer a prayer at the convention on Thursday.

While Graham—who also prayed at Trump’s inauguration— is the biggest evangelical name on the lineup, he’s not the only one. Myron Lizer, a former bivocational pastor in Arizona who now serves as vice president of the Navajo Nation, will speak Tuesday.

“I attribute it to God’s favor that I am in this position for such a time as this,” he told CT. He suggested that perhaps the Lord would use the Navajo to help the country out of turmoil, like the role of the code talkers in World War II.

Lizer, who led a Southern Baptist congregation in Window Rock, Arizona, said he has a unique perspective as a Christian and a Native American. He knows what it’s like to feel the tension on both sides and believes “right-wing and left-wing extremists are taking America down the wrong road.”

While the Navajo leader praises what the Trump administration has done for his people—including providing $714 million in COVID-19 relief funding and establishing a task force to address missing and murdered indigenous women —he knows many of his fellow Navajo oppose Trump. Navajo President Jonathan Nez, for example, is a Democrat. But the two fellow Christians pray together each week.

Evangelical Presbyterian pastor Andrew Brunson made an unlisted appearance at the convention Monday night, part of a panel of overseas detainees returned to the US by the Trump administration. Each briefly thanked the president for his role in working toward their freedom. Brunson spent two years in a Turkish prison on erroneous terrorism and espionage charges. After a prayer campaign and through the efforts of the president, State Department, and Secretary of State Mike Pompeo, he was freed in 2018.

Later this week, convention viewers are slated to hear the more tragic story of a hostage who reportedly refused to recant her faith and didn’t make it home. The parents of the late Kayla Mueller—the Christian aid worker who was kidnapped, tortured, and enslaved by ISIS leaders in Syria—have previously criticized the Obama administration for not doing more to try to facilitate their daughter’s release and thanked the Trump administration for going after Abu Bakr al-Baghdadi.

Secretary of State Pompeo, who belongs to the Evangelical Presbyterian Church, is slated to address the convention Tuesday through remarks recorded in Jerusalem. While the location has stirred debate over politicking while on government business, it also evokes the significance of Trump’s Israel policy, including moving the embassy to the capital—a decision heralded by US evangelicals but far more contentious for believers in the region.

Nikki Haley, the former ambassador to the United Nations, described a vision for America under Trump “where every believer can worship without fear” and “where every girl and boy, every woman and man of every race and religion has the best shot at the best life.”

During the first night of the convention, this vision, and versions of it described by fellow speakers, was presented in contrast to the Democratic platform.

As Wheaton University politics chair Bryan McGraw predicted, Republicans’ message will declare “the Democrats are coming for their churches, their schools, their families,” as an attempt “to make evangelicals believe that unless they vote for Trump—and vote for him in large numbers—they will be on the receiving end of a kind of cultural revolution.”

“People of faith are under attack,” Donald Trump Jr. said. “You're not allowed to go to church, but mass chaos in the streets gets a pass. It's almost like this election is shaping up to be church, work, and school versus rioting, looting, and vandalism.”

Turning Point USA’s Charlie Kirk, who runs a think tank affiliated with Liberty University, mentioned the importance of pastors being able to reopen their churches without government interference. Liberty’s Jerry Falwell Jr., who was an early evangelical supporter of Trump in 2016 and gave a seven-minute speech in his favor during the last convention, had not been invited to speak.

In a Pew Research Center survey released last month, 82 percent of white evangelicals and 55 percent of all Christians said they planned to vote for Trump while 88 percent of black Protestants supported Joe Biden. As CT reported last week, his campaign has emphasized his Catholic faith.

Samuel Rodriguez, pastor and president of the National Hispanic Christian Leadership Conference, said as a believer, he doesn’t vote for “parties or for politicians but for policies that advance the Lamb’s agenda of protecting the sanctity of life, advocating for biblical justice, and protecting religious freedom.”

Jack Graham, pastor of Prestonwood Baptist Church in Texas, had a similar directive.

“Christians who are watching the major party conventions should ask themselves this simple question: Do the policies being discussed by these leaders align with our biblical values and beliefs?,” said Graham, who has spoken out in favor of the president’s pro-life policies. “This question should tell Christians all they need to know.”