Outreach may not bring white evangelicals and Catholics together, but hopeful Democrats are emphasizing the candidate's religious commitments.
Daniel Silliman|August 17, 2020 08:00 AM 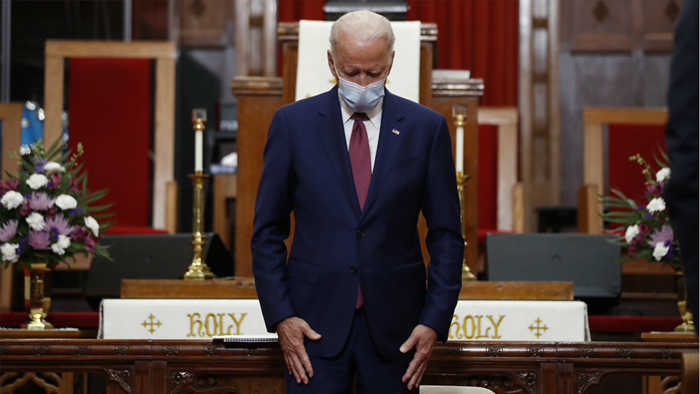 Going into the 2020 Democratic National Convention, party officials released a 60-second digital ad promoting the presumptive nominee’s Catholic faith. The ad shows former Vice President Joe Biden making Pope Francis laugh during a meeting in St. Peter’s Basilica and speaking with a group of smiling nuns on a street in Rome. In a voice over, Biden talks about the importance of his Catholic faith and how, for him, the nuns epitomized the church’s teaching that “we are our brothers’ keeper,” a biblical idea that shapes his liberal politics.

The Democratic Convention tweeted the video to its 68,000 followers, saying, “This is the kind of moral conviction we need in the president of the United States.”

It will not be the last time the Democrats spotlight Biden’s lifelong Catholicism. A political action committee announced last week it will spend $50,000 on ads highlighting religious reasons to vote for Biden and the convention this week will feature a nun and a Jesuit priest in high-profile speaking spots.

Experts on the historically complicated relationship between American Catholics and evangelicals say this emphasis—primarily aimed at Catholic and mainline Protestant voters—may not help Biden win over white evangelicals, a core part of President Donald Trump’s base. But it also won’t hurt.

“He is viewed as having an authentic faith,” said Richard Mouw, former president of Fuller Theological Seminary and professor of faith and public life. “He may not be the conservative Catholic that a lot of evangelicals would like him to be, but when he talks about his faith, it rings true.”

Evangelicals might have a similar response to Biden’s religious commitments, Mouw said.

“Most evangelicals didn’t care about the Catholic-Lutheran dialogue on justification. They said I know a Catholic at work and he loves the Lord,” he explained. “People believe Biden’s faith is real. He has a pastoral tone. … A lot of evangelicals who support Trump do worry about his mean-spiritedness and the polarization and we’ve been missing that pastoral tone.”

Mouw told Christianity Today he plans to vote for Biden, despite some qualms about the Democratic Party’s positions on abortion and religious liberty.

These two issues will be the sticking point for many white evangelicals. When it comes to religious outreach, conservative critics of the Democratic candidate will likely argue that Biden is not Catholic enough, according to Baylor University historian Barry Hankins, who has written about evangelical opposition to the first Catholic candidate from a major party, Democrat Al Smith.

In 1928, Smith said he didn’t believe Catholic teaching (at the time) that pluralism and democracy were inherently anti-Christian. He accepted the American set up that separates church and state—and thought it was a good thing. Many conservative Protestants, looking at authoritarian Catholic regimes in Europe, didn’t believe him. Biden, in some ways, faces the opposite problem. He disagrees with church teaching on some issues and evangelicals do believe him.

“He’s more serious about his Catholicism than a lot of Catholics are, but he still found his way to the pro-choice position on abortion,” Hankins said. “A lot of Catholic Democrats seem to be in this tension. The autonomy of the individual is kind of central to what their politics are all about and that’s in tension with the social teachings of the Catholic Church.”

Hankins added, though, that a major-party politician doesn’t need to resolve the difference between the ideals of American freedom and Christian freedom to win the election in November. He said that while Biden’s liberal Catholicism may not win many evangelical votes, even a few percentage points could matter in a close election.

White evangelicals may also choose not to vote, said Shaun Casey, former director of the US State Department’s Office of Religion and Global Affairs under Secretary John Kerry, and the author of a book about how John F. Kennedy became the first Catholic president despite Protestant opposition.

“There is a growing dissatisfaction among evangelicals with Trump,” Casey said. “They know Trump’s weaknesses: His immorality, his incoherence, his rage and incompetence. But I don’t see it leading them into the Democratic Party.”

Casey said Biden is smart to talk about his Catholicism in the campaign, regardless. It’s a point of personal connection with many voters. And when Biden talks about how his faith formed his character, sustained him in hard times, and taught him kindness and empathy, many will see a stark contrast with Trump.

Biden has learned from previous Catholic candidates, Casey said. He knows to avoid the open conflict with conservative Catholic bishops that got Kerry into trouble in 2004 and, simultaneously, not to cede the subject of religion to the Republicans.

Biden will also use his faith to emphasize his inclusive vision of America, as Kennedy did when Protestant leaders—including evangelist Billy Graham, Christianity Today editor L. Nelson Bell, and Trump’s childhood pastor Norman Vincent Peale—questioned whether a Catholic could faithfully uphold the Constitution. The Kennedy campaign found that many Americans were offended by the narrow view of who was really an American, and would vote for inclusivity and pluralism.

Biden’s campaign will work to show that the candidate cares about all Americans—even white evangelicals.

“We don’t write anybody off in this campaign,” said Joshua Dickson, Biden’s national faith engagement director. “I know how diverse evangelicals are in terms of their backgrounds, in terms of how they look at their faith and how they practice, and in terms of the issues they care about."

Dickson has been inviting evangelicals, along with other groups of religious leaders, to listening sessions, where they’re asked their opinions about the big issues in the campaign and the stakes of the upcoming election. Though there are differences, the campaign sees common commitments too.

“The core values are the connection point: loving your neighbor, fighting for justice, and upholding the inherent human dignity of all,” said Dickson, who is an evangelical himself.

Richard Mouw has been invited to two sessions and spoken to multiple evangelical leaders who have met with the Democrats. He will join a listening session later this week. Mouw plans to bring up the party’s positions on abortion and religious liberty.

“There are real issues,” he said. “It’s very important that Biden send out a signal that he cares about communities of faith and people of conviction—even convictions that are different from his own.”

Gestures might not be enough to bring evangelicals and a Catholic candidate together, Mouw said, but they won’t hurt.