Because their congregations are less established, they risk losing significant momentum and funding.
Alejandra Molina – RNS|March 30, 2020 08:00 AM 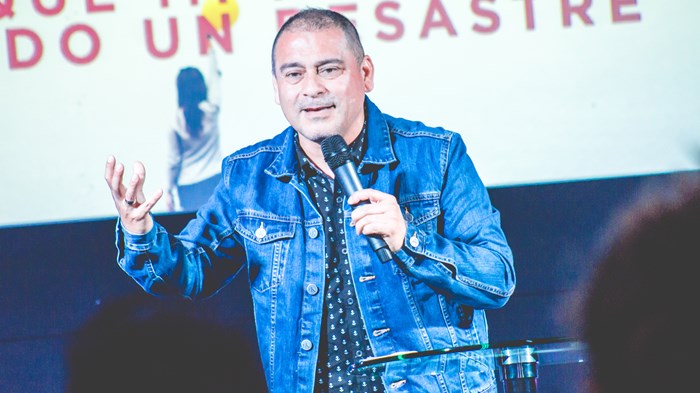 Pastor Kerlin Calderon knows that if the coronavirus shutdowns continue for another three months, it’s possible his church in the Bronx could be in trouble.

Weekly offerings keep dwindling. He worries that the church may have to dip into its savings to pay its rent. But he remains hopeful.

“You always have faith that you are going to make it, that God is going to provide because if God called you, then he will sustain you,” said Calderon, 35, pastor of Tabernáculo de Gracia (Grace Tabernacle).

Calderon, who grew up in Washington Heights, started the congregation three years ago when he noticed a lack of Spanish-speaking churches in an area where Catholic churches were shutting down.

What began with Bible study classes from people’s living rooms is now a church of about 150 members that rents space inside a Korean United Methodist Church. Next to the Korean church signage is Grace Tabernacle’s message: “Una iglesia en comunidad para la comunidad” (A church in community for the community).

As the novel coronavirus continues to spread across the United States, faith leaders have canceled worship services and shifted their ministries online to abide by social distancing guidelines aimed at preventing the spread of COVID-19. While megachurches and more established congregations likely have the financial resources to weather this pandemic, church plants may not have the means to do so.

This is concerning for Elizabeth Rios, executive director for Plant4Harvest, an organization that coaches and trains black and Latino faith leaders to start multiethnic churches in urban communities. But she is motivated by the way startup churches are advocating for their flocks during this crisis. Black and Latino churches, Rios said, have a history of rising up in crisis.

“Honestly, I’m excited and hopeful because they have risen to the occasion,” said Rios. “I haven’t seen church planters give up hope or throw up their hands and say, ‘This is it for us.’

“They feel like modern-day disciples,” she added. “They’re going to revolutionize how we do church.”

Church planters skew younger and can adapt more quickly to change, Rios said. She has seen these churches approach an “everybody is a minister” mentality. One church divided attendees into groups of about 15 people and designated leaders to check if their groups were in need of prayer, food or any other supplies.

Younger churches have also quickly adapted to online ministry because they were already doing it, she said.

Still, there are big challenges.

“For regular-sized churches and megachurches it will impact them, but it won’t wipe them out,” Rios said. “This has the potential to wipe out church plants.”

Some church plants didn’t have automated or online giving set up, Rios said. There are also others who just started their churches and have not yet established deep ties in their communities. One pastor, for example, signed a lease just three months ago to operate a new church, Rios said.

“People may not necessarily feel as engaged because you still are new to them,” she said.

Troy Davis, who planted a church in Atlanta, knows the struggle. He rented a space from a school to operate his church, which closed nearly two years later due to lack of resources.

The rent was too pricey, he said.

“It’s already rough for us to plant a church where the church is needed,” said Davis, who works with youth and people who are homeless. “Then you tackle something like a pandemic, it becomes even harder because of lack of resources.

“A lot of inner-city churches, our bread and butter (is) that we’re community. We stick together,” Davis added.

During a time when people can’t gather because of the pandemic, that fabric of community is impacted, Davis said.

Davis said pastors need to stick together and share strategies of how they’re adapting.

“Church planting is a lonely road already. It’s lonely. It’s competitive, which it shouldn’t be, but it is,” Davis said.

With something like the pandemic, Davis said “it could drive a wedge between brothers who are planting churches in the inner city to do well, but because we’re all fighting for resources, it becomes a church war.”

For the David Ramos, there’s both risk and opportunity during this pandemic. Ramos is an associate director for City to City in New York, an organization that trains pastors to plant gospel-centered churches in the city.

Many church planters, Ramos said, do not have the cash flow or reserves that more established churches may have.

“Many perhaps may not weather the storm because (of) the funding that’s going to impact them when they’re not meeting week to week,” Ramos said.

Part-time pastors are also under a lot of stress, working another job on top of leading their churches, Ramos said. With social distancing measures in place, some pastors are working from home while caring for their kids and families as well as trying to minister to their flock.

“It’s overwhelming to do that,” Ramos said. “As the tsunami of sickness begins to hit New York City, this is just going to get worse, because what’s going to occur is now we’re going to be (dealing) with death and dying.”

A lot of church planters are run by a younger generation and have already been livestreaming, creating chat rooms and a larger virtual presence, he said.

“They are probably the vanguard of doing church in new ways,” Ramos said.

Ramos is encouraged by church planters who do this work “out of a sense of calling.” For the Latino church in particular, Ramos said it “has thrived in some of the most depressed neighborhoods.”

Churches of color “have a history of operating with challenged environments” and “may actually be better able to rise up in the midst of crisis,” he said.

That’s what Calderon and his church Grace Tabernacle are doing.

Grace Tabernacle connected with the neighborhood housing project to gauge the needs of elders, delivering toilet paper, milk, and any other supplies.

Normally, their church hosts workshops on wellness and healthy eating. Now, they’re thinking of hosting virtual Zumba workouts that their members can access.

The younger members of the church are also FaceTiming with parents who now have the added task of helping their children with distance-learning school assignments. For some parents, there are language and technology barriers that have made that process difficult. In those video chats, church members have guided parents on how to use iPads their children have brought home from school.

They’re also there to just listen to their fellow church members over the phone.

“They just need somebody to encourage them to let them know that this will pass,” Calderon said. “As a church, we’re offering encouragement through prayer, through counseling. Just working with them and listening to them while they vent.”

On a normal weekend service, Grace Tabernacle members take a one-minute break to say hello to one another and exchange pleasantries. It’s like a “New York minute,” Calderon said.

Church members have joked that once this is all over, “We’re going to have ten New York minutes next time we meet.”