Once considered a beacon of peaceful coexistence between Christians and Muslims, the West African nation has been embroiled in unprecedented extremist violence.
Sam Mednick - The Associated Press|May 11, 2021 06:00 AM 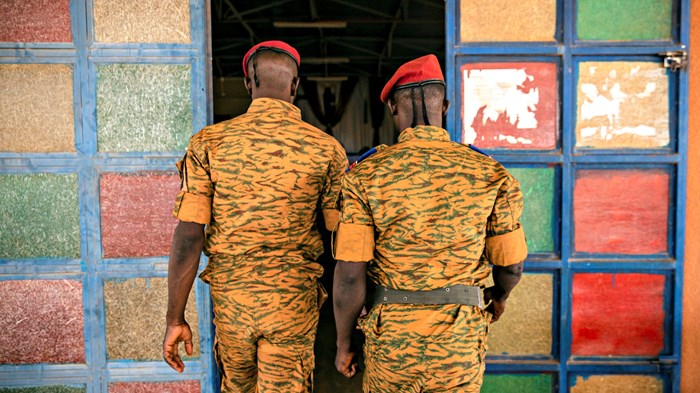 In the more than 15 years Salomon Tibiri has been offering spiritual succor as a military pastor in Burkina Faso, he’s never fielded so many calls from anxious soldiers and their relatives as in recent years, when the army found itself under attack by Islamic extremist fighters.

“Before the crisis there was more stability,” Tibiri said, seated in a military camp church in the city of Kaya, in the hard-hit Center-North region. “Now (the soldiers) are busier, and when you approach them you feel their stress—much more stress.”

Once considered a beacon of peace and religious coexistence in the region, the West African nation has been embroiled in unprecedented violence linked to al-Qaeda and the Islamic State since 2016.

[Editor’s note: A series of terrorist attacks on churches led Open Doors to add Burkina Faso to its persecution watch list in 2020 for the first time, and to rank it No. 32 out of the 50 countries where it’s hardest to be a Christian in 2021. Meanwhile, Burkinabe Christians have debated whether or not to join civilian militias in response.]

The attacks have thrown an ill-equipped and undertrained army into disarray—and overwhelming the chaplains tasked with supporting them.

In interviews in the Center-North and in Ouagadougou, the capital, military chaplains told The Associated Press that they are stretched thin by the unprecedented conflict and what assistance they are able to provide through phone calls and prayer services is insufficient. 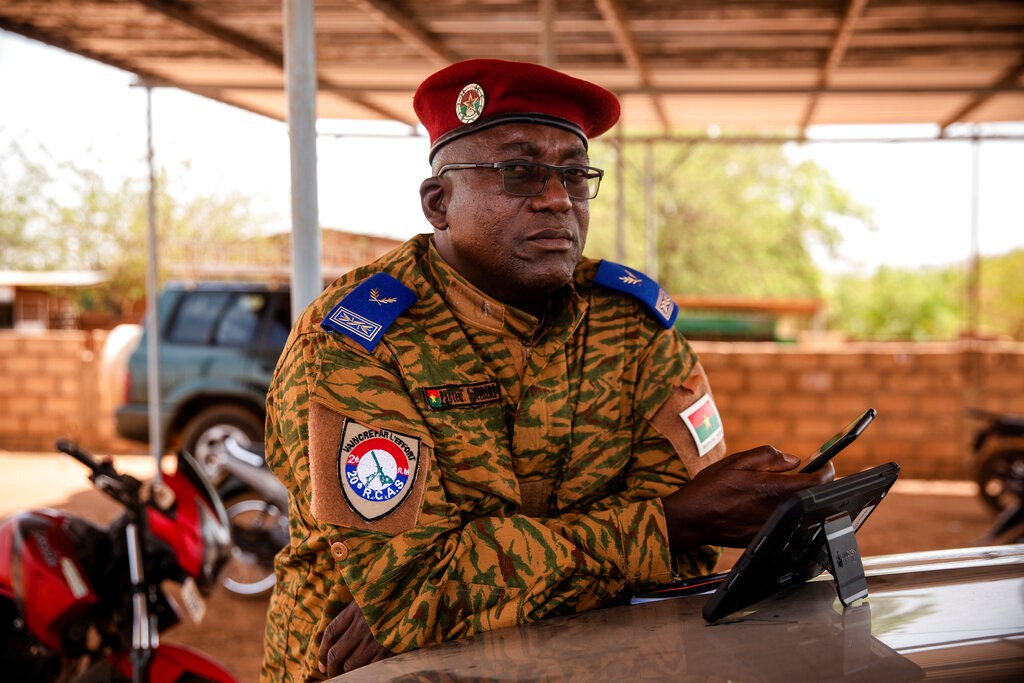 Salomon Tibiri, a pastor and military chaplain in Burkina Faso for 15 years, has never fielded as many calls from anxious soldiers as in recent years amid attacks by Islamic extremist fighters.

Just seven chaplains, hailing from Protestant, Catholic, and Muslim faiths, are charged with spiritually advising some 11,000 soldiers and helping maintain their morale. The army has not devoted what little resources it has for them to embed with units, and they say the distance only makes it harder to keep soldiers motivated.

The troops “face death every day. … At this moment they also need to have much more spiritual help,” said Noel Henri Zongo, a chaplain and Catholic priest.

It’s crucial work as experts say the psychological effects of conflict like what’s occurring in Burkina Faso can be particularly tough on soldiers who are experiencing it in their country for the first time. It can put them at greater risk for post-traumatic stress disorder and also increase the likelihood of them acting in ways contrary to their moral values.

Last year, 524 civilians were killed by soldiers and local defense militias fighting alongside them, according to the Armed Conflict Location and Event Data Project (ACLED), more than the 432 killed by the extremists. At least 180 bodies were found in mass graves near the government-controlled town of Djibo, with evidence of army involvement in large-scale executions, according to Human Rights Watch.

Etienne Bonkoungou, another of the chaplains, said he regularly counsels troops grappling with the question of whether their participation in the fight makes them defenders or killers.

“The Bible says not to kill, so as a soldier these questions often arise,” Bonkoungou said. “To kill another, to watch a colleague die (or kill someone yourself), should you kill? Should you not kill?”

To help them reconcile that dilemma, he uses biblical examples of devout people fighting in wars, and advises that “even sometimes God himself orders killing.”

Soldier Luc Yelkouni acknowledged that the conflict “impacts our morale.”

A 29-year-old veteran of nearly a decade with the military, he had never before suffered the kind of trauma as in recent years, with one colleague after another killed by the extremists. After a stint in the Sahel, he turned to a military priest for help dealing with an experience from his deployment that was so traumatic he said he didn’t want to go into details, even three years later.

Speaking to the priest was reassuring, Yelkouni said.

The chaplains “play a key role for us,” he said, “and the collaboration is really good.”

While the chaplains did not say what they think the army should do, one said it would be helpful if there were four or five more of them. And they wish they could be physically closer to those deployed for dangerous duty.

“The role of a chaplain is to be present where the men are,” Zongo said, “and what he needs to bring is the necessary capacity to face danger and to get up after failure.”

The army, whose communications team facilitated the chaplain interviews and sat in on them, did not respond to a request for comment.

But last year, in an acknowledgment that its clergy needed help, it brought in US military chaplains to train their counterparts.

Maj. Mike Smith, lead chaplain with US Special Operations Command Africa, said the Burkina Faso chaplains had never been trained in tasks like caring for the wounded, counseling families, mourning the dead, and motivating fighters.

“(The army was) seeing casualties on a regular basis, whether soldiers were being killed in attacks or wounded in attacks,” Smith said. “And … it was tearing at the resiliency of their force, just as a whole, and it even impacted their retention.”

With the coronavirus pandemic also affecting operations, the US supplied the Burkina Faso chaplains with iPads that they used to record sermons and broadcast them to the front lines through messaging apps. 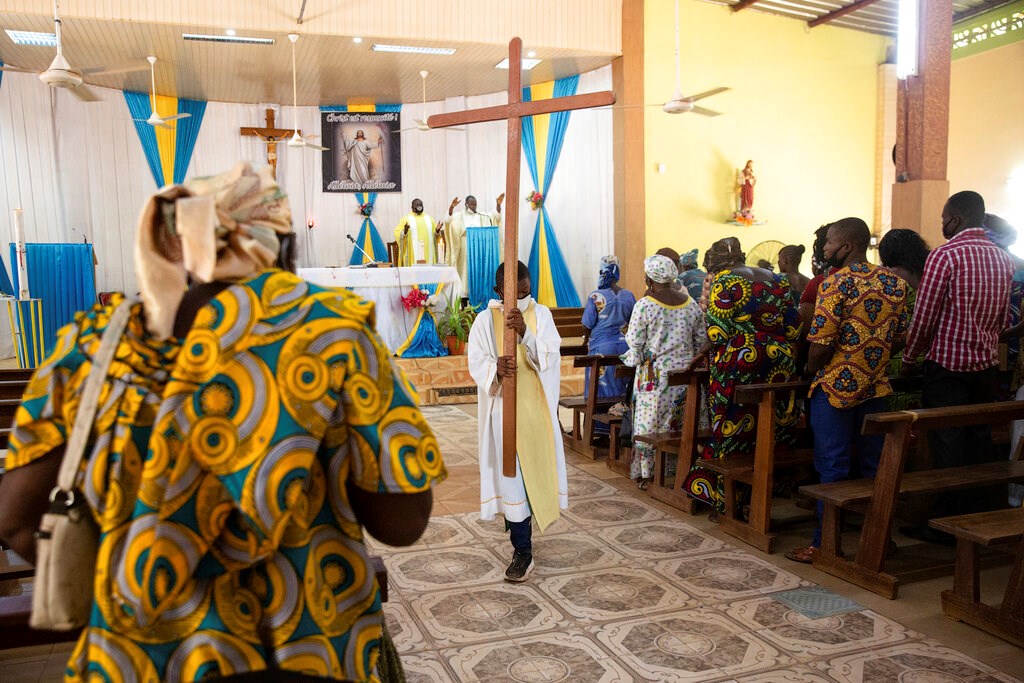 An altar boy carries a cross as Noel Henri Zongo, priest at the Church of the Sangoulé Lamizana military camp in Ouagadougou, Burkina Faso, celebrates Mass on April 11. Just seven chaplains are charged with spiritually advising some 11,000 soldiers and helping maintain their morale.

How much they are able to lift spirits can have real consequences, with experts saying low morale in the ranks is impacting Burkina Faso’s counter-terrorism strategy.

Héni Nsaibia, an ACLED analyst who specializes in the Sahel region that has been the epicenter of the violence, said it appears that volunteer militias have essentially “replaced” the army on the front lines as soldiers prefer to stay in their barracks.

A decision last month to conduct airstrikes and use special forces rather than launch a ground offensive after a deadly ambush in the eastern part of the country is also a likely indication of greater reluctance among regular troops, he added.

Despite the limited resources, soldiers said the chaplains have been a lifeline.

Yempabou Kobori, 30, said one thing that keeps him going is a Bible verse his pastor shared from him from the Book of Psalms, about staying safe even as thousands around you fall. He recites it before battle.

“It reminds me that I am not alone.”

1 of 2
Salomon Tibiri, a pastor and military chaplain in Burkina Faso for 15 years, has never fielded as many calls from anxious soldiers as in recent years amid attacks by Islamic extremist fighters.An altar boy carries a cross as Noel Henri Zongo, priest at the Church of the Sangoulé Lamizana military camp in Ouagadougou, Burkina Faso, celebrates Mass on April 11. Just seven chaplains are charged with spiritually advising some 11,000 soldiers and helping maintain their morale.
expand