Leaders cite missiological methods and the work of the Spirit as the reasons for the surprising statistics.
David Roach|February 21, 2022 06:00 AM 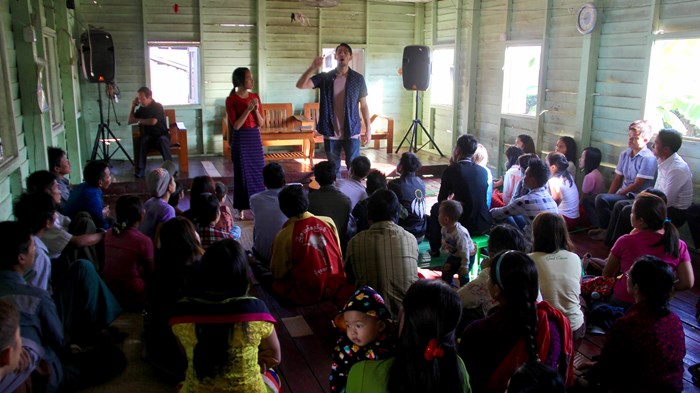 The Southern Baptist Convention fell on hard times last year, with a contentious sexual abuse investigation, racial tensions, and shrinking US baptism numbers. But amid the gloom, there was a bright spot: international missions.

During the COVID-19 pandemic ’s first year, the number of new believers harvested by the 3,552 missionaries serving with the convention ’s International Mission Board (IMB) increased 62 percent from the previous year. Baptisms were up 81 percent from 2019 to 2020 (the most recent year for which data is available), and salvation testimonies continue to pour in.

The increases are particularly significant in a denomination where many cite missions as their reason for joining and staying.

A 53-year-old Thai man with chest pain went to see an IMB medical missionary outside Bangkok. The man collapsed in the clinic and regained consciousness only after the IMB missionary, a physician, performed emergency medical procedures.

As they waited for an ambulance, the man prayed to receive Christ, prompting the doctor to ask, “When did you start to become interested in God’s story?”

The man pointed to the place on the floor where he collapsed and said, “Right there. Before that, I had never been interested at all. But when I collapsed, I heard God call my name three times, and I knew he was warning me.”

That wasn ’t an isolated incident, according to IMB reports. The evangelistic surge, missiologists say, is attributable to effective methodology, the pandemic, and the sovereign work of the Holy Spirit.

“We ’ve seen the Holy Spirit working across the globe in mighty ways,” said Wilson Geisler, IMB director of global research. One missionary team “saw the first believers among an incredibly tough-to-reach people group.” Another “saw more people coming to faith in 2020 than in the previous three years combined.”

In a video report ahead of February’s Executive Committee meeting, IMB president Paul Chitwood noted that even with canceled short-term missions trips keeping tens of thousands of Southern Baptists at home, full-time missionaries’ international work was able to continue and thrive.

Despite fewer face-to-face evangelistic encounters thanks to COVID, IMB personnel and their partners around the world “found innovative, often virtual, ways to present the gospel,” according to the IMB’s 2020 Annual Statistical Report.

IMB statisticians are sparing in the information they release about their counting methodology. They say data reflects the work of IMB personnel and “their baptistic partners,” though neither the number of partners nor the groups they represent are specified. Several years ago, under David Platt, the IMB saw a dramatic decline in converts, baptisms, and church plants, as the agency transferred ministries from missionaries to national partners. (See CT’s 2016 article on how missions agencies count converts.)

Additionally, IMB cautions against parsing the numbers too closely because the number of missionaries and ministers reporting varies from year to year.

“For security reasons,” Geisler said, “in each part of the world, the number of personnel and close partners who provide data for the report is not provided. This means it will always be unclear how many individual report givers contributed” to annual statistics. “Field research teams and our US-based Global Research Department review reports for anomalies.”

Despite the IMB’s qualification and hedging of the numbers, they argue the increase is incredible.

“I was not surprised at the increase,” said John Brady, IMB vice president of global engagement. “Rather, I was amazed.” He said the increase can be attributed in part to a discipleship plan coming to fruition in parts of the world.

The plan starts with discipling new Christians through 35 Bible passages “which teach the necessity and power of transformation that comes from God,” Brady said. The new believers share those key passages with their neighbors “and repeat the process.” Then they “go on to other studies such as a biblical plan to teach key doctrines and leadership development.”

Most of the reported evangelistic increase occurred in South Asia. Eighty-nine percent of 2020 baptisms (76,904) and 97 percent of new churches (17,772) were reported in that region.

While COVID-19 has caused death and infection in South Asia (with 510,000 reported deaths in India to date, according to the World Health Organization), the pandemic has not interrupted daily life there as it has in the West.

“We have heard anecdotally from South Asian pastors that because many people survive by daily labor, within two weeks of government-sanctioned lockdowns, people had to ignore those in order to feed their families,” Geisler said. “In urban areas of South Asia, we’ve also heard from personnel that COVID provided more opportunities for gospel witness and disciple making.”

Missiologist David Garrison, a former IMB leader in South Asia, attributes the increases to an explosion of church planting. He retired from the IMB in 2015 after 35 years of service, including publication of a 2004 book that has become a standard work on church planting movements.

“When we entered the region, only 4 percent of the IMB’s personnel were serving in this densely populated region,” Garrison said. The explosion of Christians and churches stems from “the multiplication of church planting movements that are an essential part of the vision and DNA of the missionaries in that region. This factor is even more evident in the new churches started in South Asia.”

Not all missiologists agree with Garrison ’s analysis. The term church planting movement (CPM) refers to a specific methodology in the missions world—one that has drawn critique in some evangelical circles and that the IMB says it does not utilize.

The traditional model of church planting focuses on preaching and launching churches with a preaching pastor, said Ted Esler, president of the missions network Missio Nexus, which includes IMB.

The CPM model focuses on starting house churches and utilizing Socratic discussions about Scripture—with the discussion led sometimes by a nonbeliever and almost always by someone from the indigenous culture rather than a missionary. Esler sees the reported IMB numbers as plausible due to IMB’s use of CPM methodology—even if it prefers not to use that terminology.

“All forms of church planting are awesome,” Esler said. “But most of the action in the world is with the movements. In Missio Nexus, we have 320 mission agency members. My guess is that among those that do church planting, 80 percent have some sort of movement-oriented ministry going.”

Among CPM critics are Reformed evangelicals like John Piper ’s ministry Desiring God and the church health organization 9Marks, who argue CPM methodology tends to lack quality controls and at times neglects the biblical task of preaching. CPM advocates reply that preaching is just a method and that Scripture requires only that churches teach the Bible.

In 2006, then-IMB missionary John Massey, now dean of Southwestern Baptist Theological Seminary ’s evangelism and missions school, penned a friendly critique of the IMB’s use of CPM methods, claiming they wrongly elevated speed as a goal of church planting at the expense of biblical fidelity.

But Massey told Christianity Today that “much has changed in the IMB leadership” since his critique was written, “with each successive IMB president distancing the organization from CPM methodology.”

Massey is “doubtful” the 2020 baptism increase “was in any way the result of CPM methodology, which has enjoyed less and less favor among Southern Baptists.”

Garrison continues to defend his CPM framework and insists it is “widespread in the IMB and throughout the international church-planting community.” Yet whatever label is used to describe the IMB’s church-planting work, Garrison said the organization is “being very faithful” to Southern Baptist standards outlined in the Baptist Faith and Message as well as the IMB’s Foundations document, which sets forth “12 characteristics of a healthy church.”

The pandemic itself drove some of the growth in conversions. “When the COVID-19 lockdown started, many Muslims in our area were out of work and in need of food,” according to the South Asia section of the 2020 Statistical Report. “Southern Baptists generously provided food for those in need. Local evangelists then had the joy of going house-to-house in Muslim communities providing food and sharing the gospel.”

The leader of IMB work in the Asia-Pacific Rim region reported similar stories from South America and East Asia. One part of Asia saw 191 professions of faith among Buddhists in six weeks through a food distribution ministry. In South America, a woman and her three children “had not eaten in two days.” When an IMB worker arrived with food, “the woman fell at this missionary ’s feet.”

Yet not all IMB statistical increases can be explained by missiological methods or doors opened by COVID-19, such as with a movement of the Holy Spirit among one of the people groups IMB serves in East Asia.

Last fall, a group of adults gathered in an apartment for Bible study and worship while their children met in a nearby apartment to study Acts 16, the story of Paul and Silas sharing their faith in prison. Just then, police raided the gathering, eventually arresting three leaders.

Like the biblical characters they were studying, the leaders shared the gospel in jail. Now more than 20 formerly unengaged people have access to the gospel, along with their families and friends.

“IMB personnel and partners, regardless of the difficulty of the soil, are laboring diligently and with their best efforts, trusting God with the results,” Geisler said.

The IMB’s statistical report for 2021 is expected this spring.