Supreme Court: The landmark abortion-rights case was “egregiously wrong and on a collision course with the Constitution from the day it was decided.”
Daniel Silliman|June 24, 2022 09:00 AM
español简体中文繁體中文 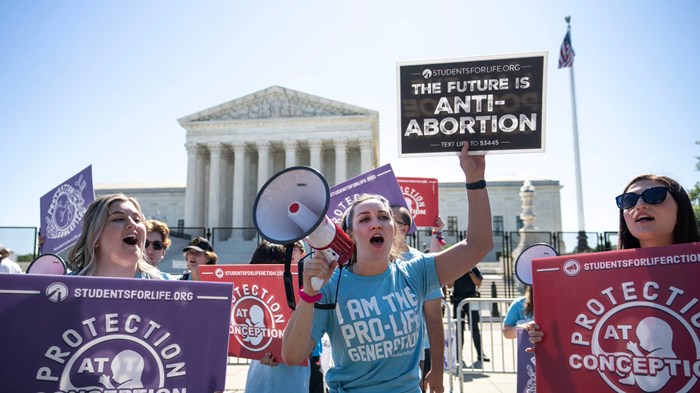 Roe v. Wade—the Supreme Court decision that mobilized generations of pro-life activists and shaped evangelicals’ political engagement for half a century—has been overturned.

Millions have marched, protested, lobbied, and prayed for the end of the landmark abortion rights ruling. After 49 years, and more than 63 million abortions, the time has come.

Christian leaders called the ruling “once unthinkable” and marked today as “the day we have all been waiting for” and “one of the most important days in American history.”

“We hold that Roe and Casey must be overturned,” wrote Justice Samuel Alito for the majority. “The Constitution makes no reference to abortion, and no such right is implicitly protected by any constitutional provision.”

The Dobbs v. Jackson Women’s Health decision was 6 to 3, with Chief Justice John Roberts concurring with the majority. The opinion of the court closely resembled an Alito draft leaked last month.

The decision is the result of a trio of conservative justices appointed during Donald Trump’s presidency: Neil Gorsuch, Brett Kavanaugh, and Amy Coney Barrett.

Evangelicals have been the religious group most opposed to abortion and most eager to see Roe overturned. While abortion was never evangelicals’ only issue, in the voting booth it often outweighed all other concerns. Some supported Trump despite moral misgivings in hopes he would deliver on his promise to appoint justices that would finally overturn Roe and the subsequent Supreme Court decision that affirmed abortion rights, Planned Parenthood v. Casey.

The political calculation appears to have paid off. The three new justices joined Alito and Clarence Thomas in a bold decision saying the court got it wrong.

“This day belongs to the many people who have labored long and hard to make it happen—and to President Trump, who deserves our thanks for keeping a promise I did not think he would keep,” said Matthew Lee Anderson, a Christian ethicist and Baylor University religion professor.

Ed Whelan, an EPPC senior fellow, referred to the ruling as the “crowning achievement of the conservative legal movement.”

The majority opinion reflected the arguments of evangelical and Catholic pro-life groups who filed friend-of-the-court briefs. Strategically, many focused less on arguments for fetuses’ humanity and right to life, and more on the problems with the legal reasoning behind Roe.

“Roe was wrongly decided and poorly reasoned,” wrote the attorneys for Americans United for Life. “Numerous adjudicative errors during the original deliberations—especially the absence of any evidentiary record—have contributed to making Roe unworkable. … There is a constant search for a constitutional rationale for Roe, and the Court has yet to give a reasoned justification for the viability rule.”

The attorneys for the Ethics and Public Policy Center (EPPC) made the same point: “As a matter of the Constitution’s text and history, it is no secret that Roe is not just wrong but grievously so. Roe was roundly criticized as wrong the day it was decided, it has been robustly opposed both within and outside the Court ever since, and no sitting Justice has defended the merits of its actual reasoning.”

“Mississippi asked the Court to overturn Roe because that case was egregiously wrong and had no basis in constitutional text, structure, or history. Additionally, Roe’s changing standards have long been unworkable, which is why so many pro-life laws ended up in court,” said Kristen Waggoner, general counsel for ADF. “It also failed to account for changing science, which demonstrates that life begins at conception.”

How Roe was decided

The court’s decision in 1973 was based on the argument that fetal life does not have constitutional protection. Lawyers in the case pointed out that traditionally, rights are understood to begin at birth. The 14th Amendment, for example, extended citizenship to all those “born … in the United States,” not those conceived within the nation’s borders. A fetus, similarly, is not allowed to own property.

“Privacy” is never mentioned in the Constitution, but the Ninth Amendment says that rights not mentioned in the Constitution are not to be denied by default. And the 14th Amendment guarantees legal due process, which the court said indicated a right to privacy, including the right to make decisions about abortion without state interference—at least up to a certain point.

The justices debated that point. After some internal back and forth, they settled on fetal viability.

“The Court does not today hold that the Constitution compels abortion on demand,” he wrote. “It does not today pronounce that a pregnant woman has an absolute right to an abortion. It does, for the first trimester of pregnancy, cast the abortion decision and the responsibility for it upon the attending physician.”

As historian Daniel K. Williams has noted, however, Blackmun was wrong. Roe accepted none of the arguments of the pro-life movement and delivered a decisive win to abortion rights advocates. The decision forced 46 state legislatures to rewrite their abortion laws, bringing them into line with what had been, until then, the most liberal abortion laws in the nation.

Most evangelical Christians at the time saw it as an appalling decision, disregarding the unalienable right of life.“This decision runs counter not merely to the moral teachings of Christianity through the ages but also to the moral sense of the American people,” CT argued in 1973.

The Southern Baptist Convention, the Assemblies of God, the Christian and Missionary Alliance, the Presbyterian Church in America, and other denominations all passed pro-life resolutions in the decade after Roe.

In their influential book Whatever Happened to the Human Race?, evangelist Francis Schaeffer and pediatric surgeon C. Everett Koop called abortion the “first and crucial issue,” the “keystone” to protecting the dignity of human life.

“We implore those of you who are Christian to exert all your influence to fight against the increasing loss of humanness—through legislation, social action, and other means at your disposal,” they wrote in 1979. “If we do not take a stand here and now, we certainly cannot lay any claim to being the salt of the earth in our generation.”

The movement almost achieved victory in 1992. Five abortion clinics and one independent doctor sued Pennsylvania for its restrictions on abortion, including a mandatory waiting period and notification of a spouse or parent. At the time, eight of the nine justices had been appointed by Republicans, though at least three of them were known to support abortion rights.

On the eve of the decision in Planned Parenthood v. Casey, Chief Justice William H. Rehnquist drafted a 5-to-4 majority opinion overturning Roe.

Then at the last minute, Justice Anthony Kennedy switched sides. He joined Sandra Day O’Connor and David Souter to craft a compromise that would allow states to regulate abortion to some extent—but also uphold the validity of Roe. They got the two more liberal justices, Blackmun and John Paul Stevens, to sign on.

Though it may have been conceived as a “compromise,” the 5-to-4 decision in Casey was in fact a reaffirmation of the core claim of Roe—while almost entirely abandoning the legal reasoning. The court decided that it was crucial to recognize the precedent set by Roe, adhering the legal doctrine of stare decisis.

Questioning the authority of precedent

Each of the three newest justices raised questions about this standard in the oral arguments in Dobbs in December.

The Catholic justice acknowledged the benefits of a system that builds on precedents but argued that “part of our stare decisis doctrine [is] that it’s not an inexorable command and that there are some circumstances in which overruling is possible.” She rattled off multiple examples, including one civil rights case and one LGBT rights case.

Roberts seemed to search for a way to modify the previous rulings and perhaps set a different standard for how much abortion could be regulated without actually rejecting a constitutional right to abortion. The attorneys on both sides, however, indicated they thought the case was all or nothing.

“I read your briefs,” Alito said to the attorney defending Roe and Casey. “Your briefs [say] that the only real options we have are to reaffirm Roe and Casey as they stand or to overrule them in their entirety. You say that ‘there are no half-measures here.’ Is that a correct understanding of your brief?”

She agreed it was. And Alito, soon after the hearing, started drafting a bold decision overturning Roe and Casey completely.

“Overruling a precedent is a serious matter. It is not a step that should be taken lightly,” he wrote. “In this case, five factors weigh strongly in favor of overruling Roe and Casey: the nature of their error, the quality of their reasoning, the ‘workability’ of the rules they imposed on the country, their disruptive effect on other areas of the law, and the absence of concrete reliance.”

The decision does not criminalize abortion, but sends the question of regulation back to the states, where voters and legislatures will decide when a woman can and can’t choose to terminate a pregnancy. Some states have passed “trigger laws” putting restrictions into effect immediately.

“For too long, the Roe and Casey decisions have allowed our nation to turn a blind eye to the plight of those who have no voice—to view these lives as a burden instead of a blessing. While this ruling is a significant step toward establishing a true culture of life, the issue of abortion will now be sent back to the states,” said Chelsea Sobolik, director of public policy for the Southern Baptist Ethics and Religious Liberty Commission (ERLC).

“We must continue to use our time, talent and treasure to protect the preborn, care for their mothers, and advocate for state laws that protect them both.”

As the decision released Friday morning, evangelical leaders referred to it as one of the most significant days in the country’s history.

“I’m thankful to God for this historic day...a day to celebrate life,” said Doug Clay, general superintendent of the Assemblies of God. “Not to gloat, but to rejoice and give thanks to the Lord of life. To continue our efforts in creating a culture of life in the communities we serve.”

Focus on the Family said, “After 50 years of fighting for the unborn, our prayers have been answered.” The Christian Medical and Dental Associations called it a “much-needed victory for life and for healthcare.” And the head of the ERLC declared, “a new chapter in the pro-life movement begins.”

Experts indicate the ruling will immediately result in a 10 to 15 percent reduction in the number of abortions. Long term, the impact is less clear.

“We do not pretend to know how our political system or society will respond to today’s decision,” Alito wrote. “We can only do our job …. We therefore hold the Constitution does not confer a right to abortion.”

[ This article is also available in español,  简体中文, and 繁體中文. ]