Ahead of a possible decision to rescind Roe v. Wade, Pew Research finds most Americans and most believers hold convictions with exceptions.
Kate Shellnutt|May 6, 2022 09:00 AM 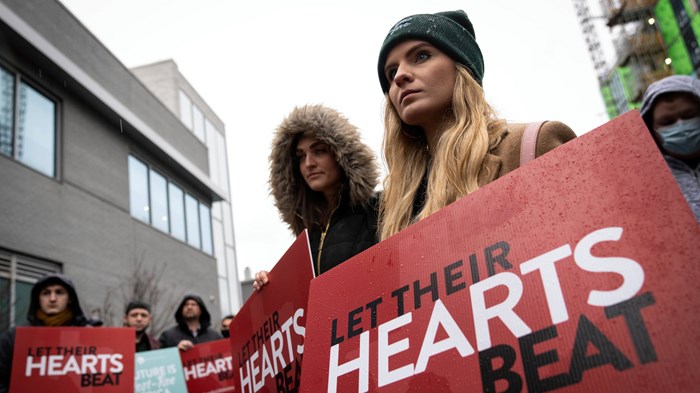 As the country awaits a landmark Supreme Court ruling that could overturn Roe v. Wade, Americans are conflicted about abortion. They’re not just in conflict with each other, but in many cases hold varying moral and legal positions in their own minds.

A new report from the Pew Research Center shows that the most common answer to the question of whether or not abortion should be legal remains “it depends.” Even among groups with the strongest positions on the issue—including white evangelical Protestants—only a minority want to legalize or ban abortion outright.

The survey was conducted in March 2022, several weeks prior to the leaked draft opinion that indicated the Supreme Court could overturn Roe v. Wade in its upcoming ruling in Dobbs v. Jackson Women’s Health Organization.

Three-quarters of white evangelicals say abortion should be illegal, with half (53%) allowing for exceptions and 21 percent saying it should be banned in all cases—about the same levels as in recent years.

White evangelicals were more likely than other faith groups and twice as likely as Americans overall to say abortion should be illegal. 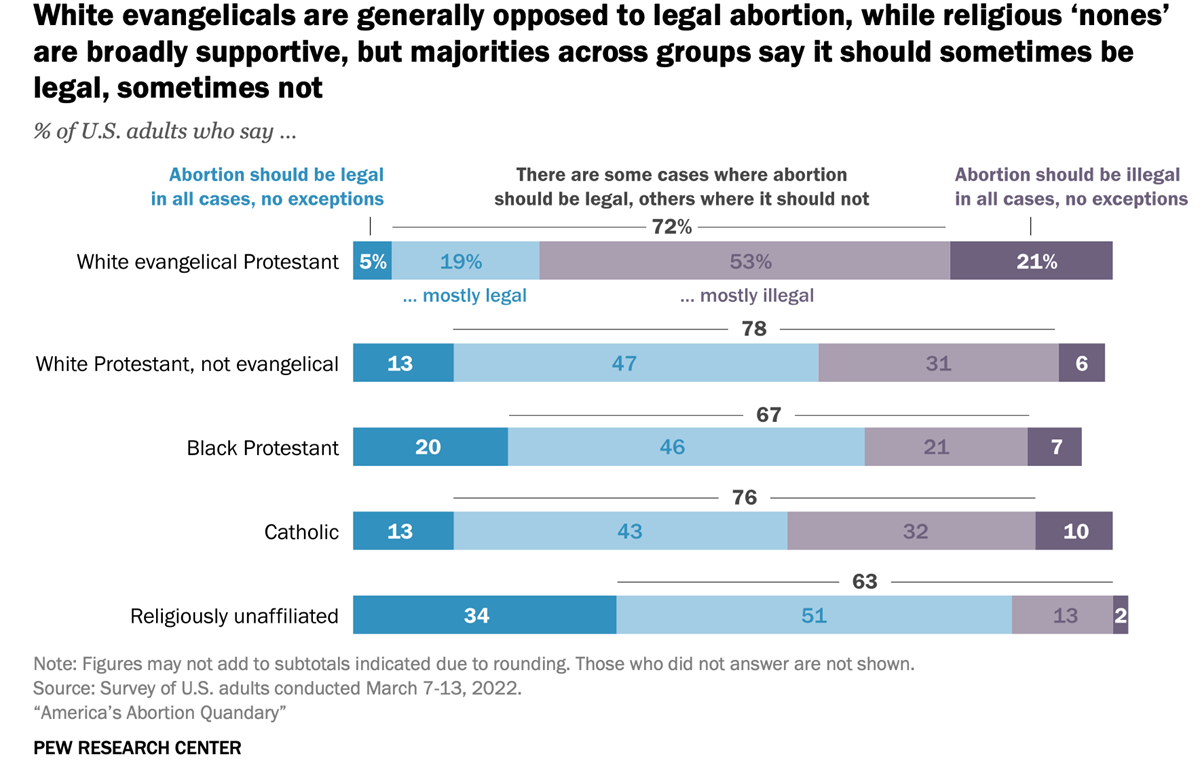 Yet more than half of evangelicals who think abortion is immoral say there are some cases where it still should be legal.

Even if white evangelicals agree on the legality of abortion in the abstract, when asked about specific situations, far fewer of them were willing to lend their support.

Most Americans want to allow abortion when carrying the baby would endanger the mother or when a pregnancy is the result of rape, but half or fewer evangelicals agree. Allowing abortion in the case of babies with diagnosed with severe disabilities or health problems was even less popular; half of Americans wanted abortion legal in such circumstances, and fewer than a quarter of evangelicals. 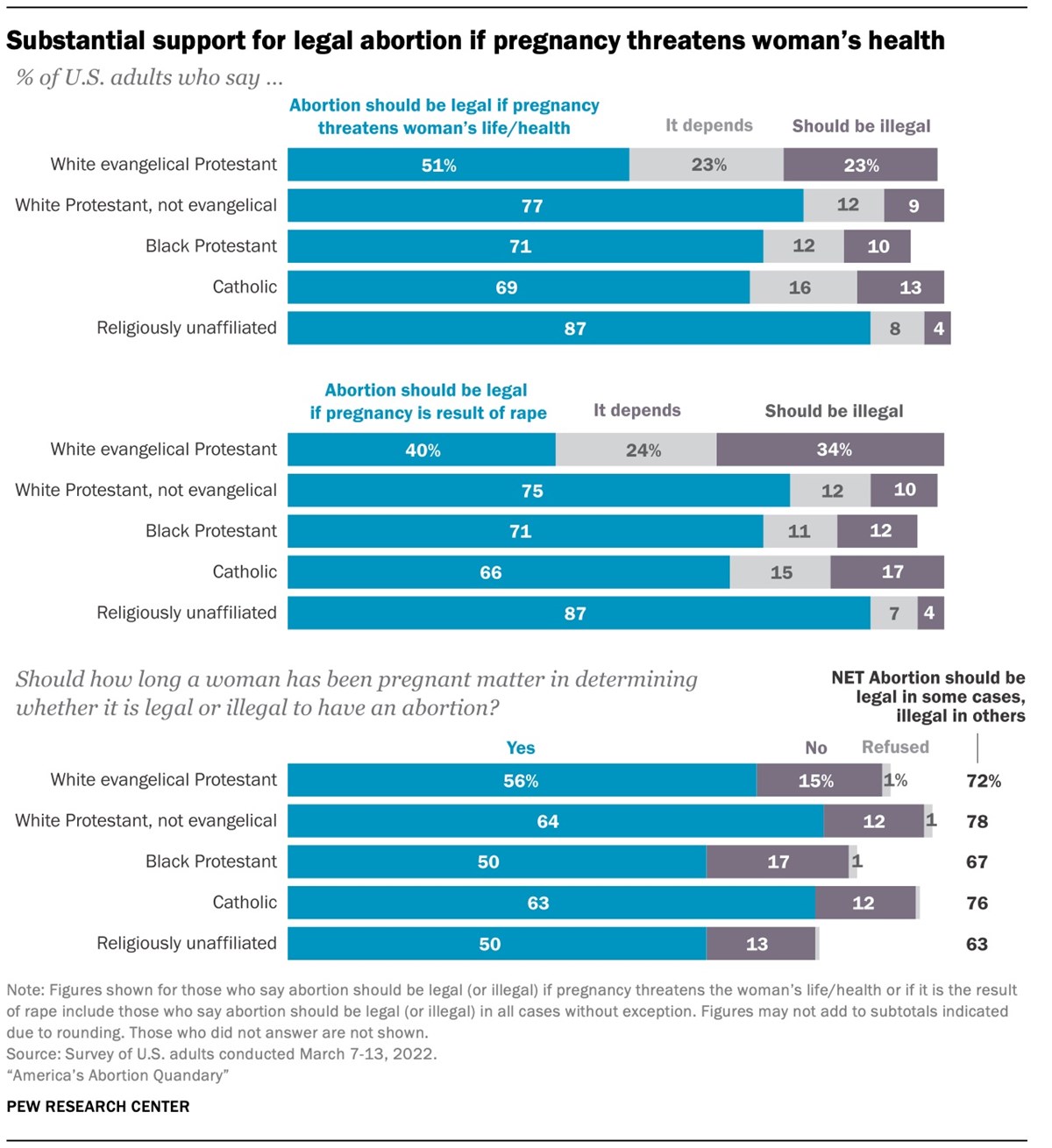 Pew did find common ground over abortion bans based on how far along a woman is in her pregnancy. Of those who supported some legal restrictions, half or more of respondents across religious groups said stage of pregnancy should be a factor.

The case before the Supreme Court now involves a Mississippi law that bans abortions after 15 weeks, which is earlier than the point of viability standard set in Roe v. Wade. Other states including Texas have enacted restrictions that fall even sooner in pregnancy, as early as six weeks.

While over half of Americans said abortion should be legal at the six-week mark—around when a heartbeat can be detected—just 41 percent said so for 14 weeks and 29 percent for 24 weeks, Pew found.

If the court overturns Roe and rescinds federal abortion rights, states will be free to set their own standards and exemptions. Americans are already seeing the possibilities play out in a swath of trigger laws—legislation that will go into place in at least 13 states as a result of the decision. Those states together represent more than 100,000 abortions annually, according to Guttmacher Institute data analyzed by the Washington Post.

“Overturning Roe v. Wade will put abortion laws back at the state level, which only means that pro-life work is far from over. Some states will pursue liberal laws. Some, as we have been seeing recently, will have more restrictive laws,” author and Southeastern Baptist Theological Seminary professor Karen Swallow Prior wrote for Religion News Service.

“Yet the definition of human lives is not a matter for the people or the state to decide. The right to life is endowed on all by our creator and the highest purpose of human law is to protect human life.”

The researchers also examined how Americans consider the two rights that are often at the center of the pro-choice/pro-life discourse: a mother’s right to choose and the personhood rights of a fetus.

The vast majority of white evangelicals—86 percent—believe life begins at conception and that a fetus in the womb is a person with rights. More than half of Americans agree.

And many of them still leave the decision on whether to have an abortion up to the mother.

“Analyzing certain statements together allows for an examination of the extent to which individuals can simultaneously hold two views that may seem to some as in conflict,” the report said.

One in three US adults—and one in three white evangelicals—said that “both the statement ‘the decision about whether to have an abortion should belong solely to the pregnant woman’ and the statement ‘human life begins at conception, so the fetus is a person with rights’ reflect their own views,” it found.

They also were in favor of punishing women who get abortions in situations where it’s illegal. Two-thirds of white evangelicals say they should be penalized in some way, whether jail time, a fine, or another consequence, compared to half of Americans overall. Black Protestants were among the least likely to say women should be penalized for illegally obtaining an abortion; just 42 percent said so.

The Texas law that allows private citizens to sue anyone who “aids or abets” abortion after six weeks targets those who help the woman seeking abortion and not the woman herself.

Much of the momentum even from the pro-life movement has focused on those who perform abortions rather than those who get them, but that could change.

“No argument is going to persuade immediatists that we shouldn’t charge mothers who abort their children with murder. But some incrementalists are also unsure of why refraining from prosecuting such women is the most justice-promoting action we can take,” Joe Carter wrote last month for The Gospel Coalition.

One factor in questions of punishment is the increased accessibility of medication abortion. More than half of US abortions in 2020 used this method. During the pandemic, some women were allowed to use the method without a doctor present.

The March 2022 Pew survey did not specifically ask about Roe v. Wade. A Fox News poll conducted in the days following the leaked opinion from Justice Samuel Alito found that most Americans aren’t hoping to see Roe reversed. Sixty-three percent wanted to let it stand while 27 percent said the Supreme Court should overturn the 1973 ruling.