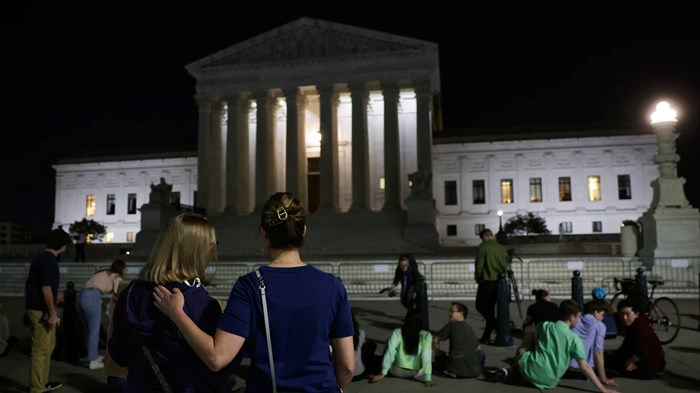 It’s the moment pro-life evangelicals had been working toward for decades. It came in a way none were expecting.

On Monday night, Politico reported that the majority of justices are poised to strike down federal abortion rights in their upcoming ruling on a Mississippi abortion case. The source? A first draft of a majority opinion written by Justice Samuel Alito.

This early version of his 98-page decision, published on the outlet’s website, doesn’t just uphold the state’s restrictions on abortion—as some had predicted the conservative-leaning court would do—but rejects the landmark Roe case as “egregiously wrong from the start,” and returns the issue of abortion restrictions to state legislatures.

The court was expected to release its ruling on Mississippi’s 15-week abortion ban in Dobbs v. Jackson Women’s Health Organization before its term ends in June. Having a draft of the majority opinion made public is unprecedented. The process is notoriously secretive. Even the timing of decisions, or how many decisions will be issued in a given day, isn’t revealed in advance.

If the court’s final ruling in this case is similar to Alito’s leaked draft, it will represent the most significant move on abortion in a generation. Bolstered by Alito’s arguments, the pro-life faithful are looking to the post-Roe horizon, when they hope fewer and fewer young lives will end due to abortion. Yet, their reactions are tempered with questions over whether the draft reflects where the high court will finally land, when the decision will be made official, and how the draft was leaked.

“This is truly a breathtaking development. Assuming it truly remains a majority opinion—which could still change—it means we are one step closer to ending the Roe-Casey abortion framework that has stalked this nation for nearly 50 years. It feels almost like a dream to be able to state that,” Brent Leatherwood, acting president of the Southern Baptist Convention’s Ethics & Religious Liberty Commission, told CT on Monday.

“But this leak also represents an incredible rupture of the protocol that has seemingly governed court deliberations since its inception.”

White evangelicals are the most pro-life religious group in the country—they’re twice as likely as the average American to want to make abortion illegal. After generations of pro-life activism and a flurry of conservative appointments, including three justices under President Donald Trump, the Supreme Court is finally poised to overturn the 1973 landmark abortion case—only the news doesn’t come from the steps of the Supreme Court but from a leak to the media.

Mark Caleb Smith, politics professor at Cedarville University, said that the leak appears designed to put pressure on Alito and the justices in the majority, while spurring Democrats to act on legislation to protect abortion rights.

“Expect the court, and the justices themselves, to be the epicenter of protests. In their shoes, I would be worried about intimidation and violence,” Smith said. Within minutes of the report going up online Monday, the Supreme Court building was barricaded.

Leatherwood shared Smith’s concerns, worried about behind-the-scenes political efforts trying to get the court to change course. “I will be praying for each justice and their safety, for this majority to hold firm for life, and for them collectively to have the fortitude to withstand the torrent of criticism that is likely coming their way,” he said.

Ed Whelan, distinguished senior fellow and Antonin Scalia chair in constitutional studies at the Ethics and Public Policy Center, called the version of the draft opinion leaked Monday “powerful and meticulous” and “a systematic dismantling of the illegitimate Roe/Casey regime.”

In the document, Alito described Roe as “exceptionally weak” and said the previous Supreme Court decision’s “survey of history ranged from the constitutionally irrelevant to the plainly incorrect.” According to Alito, “The inescapable conclusion is that a right to abortion is not deeply rooted in the Nation’s history and traditions.”

Politico reported that Clarence Thomas, Neil Gorsuch, Brett Kavanaugh, and Amy Coney Barrett had sided with Alito in a vote after oral arguments in December. Chief Justice John Roberts—who during oral arguments seemed to favor a middle-ground decision that wouldn’t reverse Roe—did not. The final outcome could change if Roberts and another conservative justice join an opinion with the three liberal-leaning justices.

It’s also possible for justices to change their minds in between the first and final draft. Sometimes even on the day the ruling comes out. In Planned Parenthood of Southeastern Pennsylvania v. Casey, the 1992 Supreme Court was ready to reverse Roe, but after further negotiation ended up affirming it instead.

But now that the court’s position on the Mississippi case has been made public, there will be more scrutiny of where the justices stand, notes Liberty University law professor Rena M. Lindevaldsen.

“The released opinion is a legally persuasive opinion that is heavily sourced to reveal to the objective reader that Roe lacked constitutional basis. However, as the oral arguments in Dobbs revealed, there will be those who believe any overruling of Roe is inherently political,” she told CT.

“But if in response to the certain public outcry by pro-abortionists that will follow this released draft, those justices who have initially voted to overturn Roe change their votes to affirm Roe, it will epitomize the political nature of the court’s abortion precedent,” she added. “At this point, they simply cannot change their votes without appearing to succumb to political pressure.”

Pro-life groups are urging the court to make the decision final now that the draft is out. March for Life president Jeanne Mancini tweeted that “given the leak the court should issue a ruling as soon as possible.”

An early decision would shift the timeline for subsequent state-level moves on abortion up at least a month.

“For pro-life people, I am not sure it changes all that much. Assuming this is the final opinion, and Roe is overturned, it just means the struggle starts now instead of in June,” said Smith, the Cedarville professor. “States will become the political battleground for abortion, with very conservative states limiting the procedure significantly and very progressive states allowing abortion throughout the pregnancy.”

Overturning Roe will also have implications for how churches and ministries care for pregnant moms and vulnerable families. In the weeks following Texas’s law restricting abortion to around six weeks, evangelical-run crisis pregnancy centers saw a shift in clientele, with women eager to confirm pregnancy earlier so they would have time to get an abortion before the cutoff.

A statement from the pro-life Susan B. Anthony list mentioned the ongoing need for an “ever-growing pro-life safety net” as well as the organization’s commitment to “build consensus for the strongest protections possible for unborn children and women in every legislature.”

Overturning Roe would not be the end of the anti-abortion fight.

“It’s not enough to send abortion back to the states,” tweeted Lila Rose, founder of Live Action. “We will not have true Justice until every human being’s right to life is legally protected from the moment of fertilization. The Constitution is not silent on abortion. The 14th Amendment’s guarantee of equal protection and due process should make abortion illegal nationwide.”

“We are just getting started in our defense of human life,” she continued. “We must be in every statehouse, the halls of Congress, and we will even be back to the Supreme Court to advocate for our preborn brothers and sisters.”

Mary Ziegler, a legal historian focused on abortion, said the argument in the leaked opinion indicates the Supreme Court could go on to rule further on the issue after Roe. “The easy way to distinguish abortion is what Alito does—to focus on the state's interest in life,” she tweeted. “But that will intensify efforts to convince the Court to declare that abortion is unconstitutional. If this is how the Court determines the pedigree of rights, it may well not stop at abortion.”

While many pro-life evangelicals are relieved at the move toward overturning Roe, political and legal experts caution against overlooking the implications of how the groundbreaking news was made public and the longer-term implications for the court. SCOTUSblog called the leak “the gravest, most unforgivable sin.”

“We desperately need the court to maintain its legitimacy for the good of our society. The court is designed to be objective, insulated from political pressure, and removed from public opinion,” said Smith. “When partisans start to see the court as merely a tool in their arsenal, and they use the court, pack it, or twist it to achieve their goals, we run the very real risk of losing those minority protections. This can only work if there is a general, cultural understanding of the court as fair, neutral, and apolitical.”

Charles Camosy, the Catholic author of Beyond the Abortion Wars, suggested that while there is a lot of common ground favoring some restrictions on abortion, extremist views threaten that unity.

“If what was leaked is basically what the opinion ends up becoming, it is a huge victory for a consistent vision of human rights. It creates the conditions for the possibility of prenatal justice which doesn’t pit women against their own children,” he wrote in a column for Religion News Serviceon Monday.

“But the leak, which puts the very notion of the legitimacy of the Supreme Court at stake, has more to say, perhaps about where the abortion debate is headed. The leaker seems to believe the stakes are so high as to be willing to destroy the Court’s ability to function.”

This Is and Isn’t the Moment Pro-Life Evangelicals ...