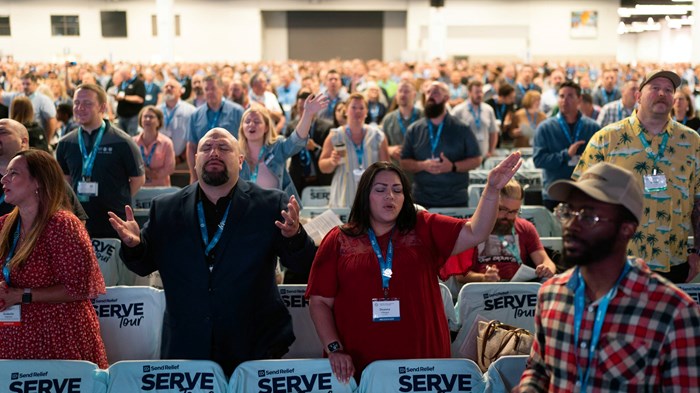 Southern Baptists sang slow and low, “Lord, have mercy on me,” in the cavernous meeting hall where they apologized for their failure to care for survivors and approved long-awaited measures designed to keep predatory pastors and irresponsible churches out of the convention.

After her 20 years of fighting and advocating, Thigpen finally saw a shift. She described “God on the move” in the denomination where survivors had been disbelieved, vilified, and ignored over and over.

This time, Southern Baptist leaders named them from the stage of the 12,000-person gathering to applause. The hall included a special room for survivors, staffed by a team of trauma-informed counselors.

Attendees spoke to them, thanked them for coming, and tucked teal ribbons in their nametags as a sign of support. And, most importantly, the majority voted in favor of abuse reform and in solidarity with survivors every chance they got.

Thigpen said when the messengers—delegates from Southern Baptist churches—raised their ballots in the air to approve recommendations resulting from last month’s abuse investigation, it felt like those seated in the rows of chairs around them were looking to them as if to say, “This vote is for you.”

“It’s a victory in so many ways, because people’s hearts changed, and that’s something only God can do,” said Thigpen, who was groomed and attacked by her pastor over 30 years ago only to be dismissed by prominent SBC leaders who had known of his previous misconduct.

Now, abuse survivors and Southern Baptists leaders wait to see whether the momentum and historic stances will result in meaningful change in the nation’s largest Protestant denomination.

The 2022 convention publicly lamented the harm its inadequate responses have caused survivors like Thigpen over the years, including “our institutional responses, which have prioritized the reputation of our institutions over protection and justice for survivors.” The SBC also strengthened its position against sexual abuse by pastors, saying such behavior is not just sinful but should be criminalized in every state.

Southern Baptists also took the first steps toward a system to identify abusers in ministry and keep them from moving from flock to flock, voting almost unanimously in favor of launching a new database.

“Survivors will look back on this moment and see every single ballot raised in the air, and they’ll say, ‘That was me being believed. That was the impact that I made because I didn’t give up,’” said Rachael Denhollander, a survivor-advocate, attorney, and consultant on the task force that oversaw the recent investigation of the SBC Executive Committee. “And the survivors that come after them look at those ballots and say, ‘I have a place to speak up now.’”

While the report from the outside firm Guidepost Solutions had a long list of suggestions—including a permanent entity to oversee abuse reports, compensation for survivors, a memorial in their honor, and a ban on nondisclosure agreements—the task force ended up putting just two recommendations before the messengers this week: the creation of the database as well as a new task force to oversee further reforms, including improving the process for reporting churches that cover up abuse.

Christa Brown, a longtime advocate whose story was central to the investigative report, was disappointed that after ensuring such a transparent investigation, the task force “pulled its punches” for the sake of SBC polity and didn’t recommend more dramatic changes from the start. After reviewing the recommendations ahead of the meeting, she told CT she was “perhaps more disheartened than ever.”

Yet Jules Woodson is leaving Anaheim encouraged and hopeful that the initial decisions will spur significant change in the long run. She expects that the database—something survivors like Brown spent 15-plus years calling for—will be a powerful mechanism for keeping abusers out of Southern Baptist pulpits.

And it can work under the SBC’s current structure of autonomous churches. The convention voted in 2019 to explicitly require cooperating churches “not act in a manner inconsistent with the convention’s beliefs regarding sexual abuse.” So far, the credentials committee, which evaluates reports of SBC churches in violation of denominational standards, has recommended disfellowshipping only a few churches that knowingly hired registered sex offenders. With the new “Ministry Watch” database, the committee could also view employing pastors on the list as evidence that a church has disregarded its position against abuse, Woodson said.

An independent body would oversee Ministry Watch, taking reports from churches as well as individuals and prompting third-party inquiries if necessary. Pastors or other ministry workers would be listed if they were found to be credibly accused of abuse through a conviction, civil judgment, confession in a nonprivileged setting, or “preponderance of evidence” in an investigation.

Leaders haven’t put a timeline on the launch of the database, but it’s the first priority for the new abuse reform implementation task force, which could gather as early as next month.

“How does a shepherd talk to another shepherd to make sure a wolf doesn’t get in there?” said Bruce Frank, the pastor who chaired the task force overseeing the investigation. “That’s really what the database is supposed to do.”

Frank was hesitant to celebrate. He called the reforms the “bare minimum” and said they should have been done 15 years ago or more. When he addressed the convention on Tuesday, the North Carolina–megachurch preacher explained that it was long past time to act—that if the SBC did not humble itself to repent, it should be prepared to be humiliated by God.

Bart Barber, the newly elected president of the SBC, will appoint the new task force in charge of implementing changes and reporting back to next year’s convention with further recommendations. Barber, a rural Texas pastor and Southern Baptist historian, was seen as the candidate with the stronger record of standing with survivors.

The biggest barrier to abuse reform in the SBC remains its polity, which doesn’t allow the denomination to oversee or dictate how individual churches are run. A minority of Southern Baptists fear that the small steps taken this year already threaten that structure.

But Barber believes reform can take place within SBC polity and that it could even be a strength. He wants to use its setup against serial abusers who tried to take advantage of the lack of hierarchical oversight in the SBC.

“Our decentralized polity can become, rather than a hunting ground in which predators brutalize their prey, a place where sexual predators are put on notice that the tables have turned and where the hunter is now the hunted,” he told reporters on Wednesday. “Predators have realized the vulnerabilities of our system. It is time for Southern Baptists to realize how nimble and resilient our Baptist polity can be, to put sexual predators on notice that Southern Baptist churches are a dangerous place for them.”

Back in 2019, Barber was among a group of Southern Baptists lobbying for a Texas state law that, now passed, gives churches the legal right to disclose credible sex abuse allegations so pastors with abusive pasts won’t sneak into other congregations.

The convention this year called for strengthening laws against pastors who groom and sexually abuse congregants, putting such violations in the same category as doctors, counselors, and those in other positions where victims are not in an equal position to consent.

Southern Baptists agreed to “encourage lawmakers in every state to pass laws that would provide consistent definitions and classification of sexual abuse by pastors, as sexual abuse committed by pastors constitutes a clear abuse of authority and trust.” At least nine states already have such laws.

Griffin Gulledge, a Georgia pastor who suggested the resolution on criminalizing clergy sexual abuse, said pastors who abuse members of their flock should bear legal consequences rather than merely confessing a “moral failing” and resigning.

Frank said the messengers’ decision last year to approve an investigation into the Executive Committee was them “kicking down the door” to allow for the moves they saw this year around abuse reform—and, God willing, widespread cultural change in the years to come.

GRACE (Godly Response to Abuse in the Christian Environment) said it was hopeful that the SBC’s actions would lead to meaningful reform but noted that the hard work comes next—in actually implementing the changes in SBC churches and seminaries.

Some changes will come voluntarily as state conventions, seminaries, and churches review and improve their own training around abuse. From the start, the new task force is meant to be a resource for abuse prevention and trauma-informed care.

Woodson referred to the decisions made this week as putting Southern Baptists on the “right path” and going in the right direction for the kinds of more robust reforms survivors would like to see.

For a long time, Thigpen, like many other advocates, had no reason to hope that that change was coming. Since the early 2000s, when she began speaking out publicly about the abuse she had reported a decade before, all she knew was the uphill battle of trying to get leaders to believe her and actually do something.

With the decisions made at this year’s annual meeting, the Florida native is allowing herself to imagine what it would be like to not have the burden of SBC abuse dominate her life.

“There’s a part of me that would like to have a life outside advocacy,” said Thigpen, adding that she is expecting her first grandchild this summer. “I just pray that they move that ball forward, and maybe we can rest.”