Top leaders address divides in the denomination at the first in-person Executive Committee meeting in a year.
Kate Shellnutt|February 23, 2021 04:48 PM 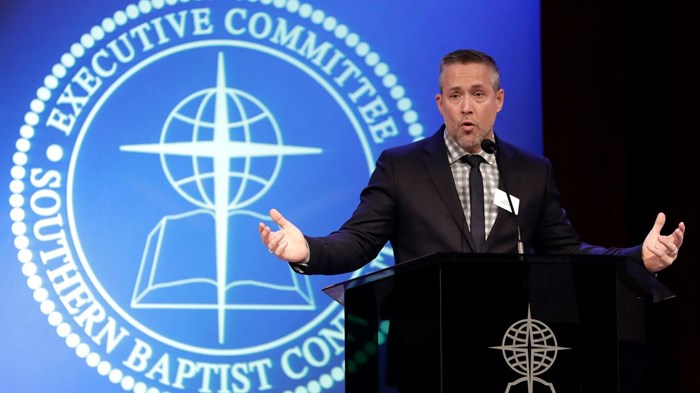 At its first in-person meeting since the pandemic took off a year ago, the Southern Baptist Convention (SBC) Executive Committee decided to cut ties with two churches whose pastors had been convicted of sexual offenses as well as two LGBT-affirming churches. But it was leaders’ concerns over ongoing tensions within the denomination that stirred Southern Baptists during the two-day gathering at its Nashville headquarters.

“Southern Baptists in large part are ready to walk into the future. But we are spending a lot of time tolerating those who would rip us apart,” said SBC president and Executive Committee member J. D. Greear during remarks Monday night. “Brothers, let’s just call it: These things are demonic.”

During his presidency, Greear led the charge to stand by abuse victims in the wake of a watershed 2019 Houston Chronicle investigation, but some advocates are still disappointed that the denomination has not been more proactive in disaffiliating with pastors who mishandle abuse allegations or compiling a database of abusive leaders.

Though the disfellowshipped congregations represent a tiny proportion of a denomination with over 47,000 churches, it’s the biggest batch to be considered “no longer in friendly cooperation” with the SBC since it launched new efforts to improve its response to abuse.

West Side Baptist’s website, which identifies the congregation as an “independent Baptist Church,” hints at its pastor’s past.

“Over 29 years ago Pastor David lived as a great sinner and rebel,” the site says. “But Christ Jesus is a great Savior! Today Pastor David has gone from disgrace to amazing grace and now has served the Lord Jesus Christ at West Side for 18 years.”

David Pearson is listed on Florida’s sex-offender registry as having been convicted of sexual assault of a child in Texas in 1993.

Because SBC churches are autonomous, the move to disfellowship means they lose their place in the convention—they can no longer send messengers to the annual meeting to participate in denominational business—but churches can continue to operate, maintain their leadership, and keep their buildings either independently or under other denominational networks. Towne View Baptist plans to affiliate with the Cooperative Baptist Fellowship.

Over the past year, in the midst of the pandemic and the political tension around the presidential election, SBC divides around racial and cultural issues have been put on display and overshadowed ongoing efforts to improve abuse responses.

The denomination publicly debated whether critical race theory (CRT) is taking hold at its seminaries and entities, with a robust condemnation of the theory by top leaders resulting in some black pastors’ exit. A network of conservative leaders is gaining momentum and calling out what they see as a liberal shift among certain entity heads.

A recent report called out the work of the Ethics and Religious Liberty Commission and its president, Russell Moore, a critic of President Trump, as “a significant distraction.” The Executive Committee heard the report on Tuesday but opted not to take any action on the recommendations for further ERLC oversight.

Outgoing president Greear, speaking to the 86-member group Monday night, offered a full-throated sermon suggesting their fighting over secondary issues and their failure to adequately address racism were hurting their gospel mission.

“The reality is that if we in the SBC had shown as much sorrow for the painful legacy that racism and discrimination has left in our country as we have passion to decry CRT, we probably wouldn’t be in this mess,” said Greear, who is completing a third year as president after the 2020 elections weren’t held due to COVID-19.

“Every lie weakens our resolve in getting the gospel to the nations,” he said, “and every moment I engage in a silly argument or spend time debunking untruths is a moment I am not focused on the Great Commission.”

After the two speeches, the Executive Committee unanimously adopted an expansion plan called Vision 2025. It would increase full-time Southern Baptist international missionaries from 3,700 to 4,200, boost the number of congregations by 5,000, and seek to reverse the decline in baptisms among teens.

While the denomination has seen growth outside its Bible Belt strongholds, including new church plants led by non-Anglo pastors, its membership decline continues to accelerate.

The SBC is slated to hold its annual meeting in June in Nashville.