Bossy Older Sisters in the Church 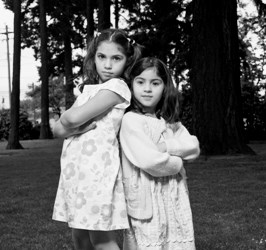 Not long ago, when I was pregnant with my now-infant son, I must admit that it came as quite a shock to me when I found out I was having a boy. I was sure that I was having a girl. There wasn't a doubt in my mind. And because I was so certain of my child's gender, I had already begun to think about how to raise a faithful Christian woman.

Although it is probably sheer coincidence, my husband and I both had negative experiences with "bossy older sisters." Within our own families and others, we observed a recurring family hierarchy in which the first child, a daughter, reigned over her siblings like a queen. And to be perfectly honest, I was that sister. I have one sibling—a younger brother—and for reasons I cannot explain to you now, I was bossy. Really bossy. In fact, I think my 30-year-old brother still has flashbacks whenever I raise my voice too loud.

Again, our experiences could be pure coincidence. I am quite sure that not every older sister is a nightmare. I am certain that many female first children are magnificent and caring and responsible and good. But the pattern in our own lives led me to wonder if there was anything behind the trend. As a mother, how could I prevent my daughter from becoming a bossy little girl?

As I mulled over this question, I formulated a hypothesis, and I would be interested to hear your own thoughts on it. So here goes:

When I was growing up, adults were very intentional about teaching boys to harness their strength. This emphasis manifested itself in many different ways, but it was especially apparent in the commandment that under no circumstances should a boy ever, ever hit a girl.

I am grateful that adults took the time to convey this message to boys. It's an important one. But the funny thing is that adults spent less time teaching girls how to harness their strength. Perhaps this is because girls are, in general, smaller and less physically threatening, but that is not the only way to measure strength. Girls and women are very strong, and one of the ways females exercise their strength is through verbal communication—the abuse of which is sometimes bossiness.

That said, I can't help but wonder if these different approaches to raising boys and girls are the reason some girls misuse their power. If girls are not taught that they can hurt people with their strength in the same way boys can, they are probably more likely to abuse their power. And sometimes they do.

Bossy Older Sisters in the Church

END_OF_DOCUMENT_TOKEN_TO_BE_REPLACED

Women Leaders in the Bible
END_OF_DOCUMENT_TOKEN_TO_BE_REPLACED