Part 2: Raising Up Women for Ministry Leadership: Tales from the Trenches

When I kept my mouth shut, the Holy Spirit led my team to a new depth of unity 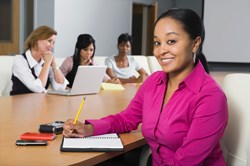 Christians are not distinguished from others by our faith. Faith can be found throughout a variety of religious sects. Rather, God intended for us to stand out to this struggling world by our love.

The deep and powerful commandment of the Lord to "love one another" has often been interpreted in one of two ways: either it's the "love is patient, love is kind" crowd who believe that we must be soft toward each other regardless of circumstance or the "missions and martyrs" contingent who believe that Jesus' love is best displayed through vaulting into perilous conditions with a willingness to make the ultimate sacrifice.

Both are correct. However, they fail to address the broad spectrum in between. Our daily interaction toward one another may not be as "spiritually-glamorous" as these two extremes, but it is our conduct in this middle ground which shapes our Christian character. Particularly for leaders.

As Jesus and his disciples traveled together along dusty roads and desert landscapes, Jesus shared, taught, befriended, and rebuked them.

Sometimes his words were hard to hear, but they were never said without that undercurrent of love which permeated our Lord's ministry like the scent of clean air just after a rainstorm.

It was this kind of challenge that he presented to me regarding the women's ministry team. They had peeled back the ministry's layers to reveal the pride-inflicted wounds beneath and begin the process of healing. Feelings of relief were so overwhelming among them that, like a girl with a crush on the bad boy in class, they were interpreting their emotions as the real deal.

Up to this point, I had restrained my female tendencies and kept these women at arm's length. In order to get them to the place where they were truly ready to tackle the ministry once more, God was now calling me to show them the "dust in your sandals" kind of love that Jesus displayed to his disciples.

Back in the Old Testament, the prophet Ezekiel had a very powerful and unsettling vision in spiritual realms. During part of this vision, four creatures were revealed to him. The Bible describes their strange faces, a wheel, many eyes and other bizarre images that would have most of us booking an appointment with the nearest psychiatrist. As it was, the vision was so shocking that an "overwhelmed" Ezekiel barely moved for seven days (Ezekiel 3:15).

Of the many strange things described in this vision, one of the most compelling for me was the connection between these four creatures. They each had four wings, two of which touched the wings of the others. So how could they possibly move around while all being joined at the wing? The Bible states:

"Each one went straight ahead. Wherever the spirit would go, they would go, without turning as they went." (Ezekiel 1:12, NIV)

Whatever direction one of them went, they all went. They followed the Spirit without hesitation and in complete unity. They never turned away from their task or the Lord. They were a perfect and holy team.

It was this image that God planted in my mind for the group leading the women's ministry. They had been pruned down from eight to five and then bam! the fifth one stepped back into a more secondary role and there were the Lord's chosen four, the ones he desired to see move as a single, Spirit-filled entity.

Although the team had opened up about their feelings and frustrations, this moment of unburdening did not mean that the issues which had brought the ministry to the point of near destruction had magically vanished.

The next goal was to see them move together as one before they attempted to tackle the rebuilding process–and fancy speeches weren't going to cut it. I had to delve into the lives of these women. My sandals needed to get dusty.

I spent time with them individually and as a group. We got to know about one another's backgrounds, families, hopes, and dreams. We discussed their hearts for ministry and they confessed where they felt they were failing the Lord. I challenged them about what they could do differently moving forward.

During this span I came to love these women as the Lord had commanded. I felt loyal and protective and privileged to be part of their lives. But I would give them no quarter when it came to staying on task and becoming like those "four living creatures" who went where the Spirit led. I rebuked when needed, but always with love.

They began to be more intentional about praying together and connecting socially. Over a period of several weeks, they grew substantially in their openness and fondness toward one another. The bond had been formed beyond the initial "girl with a crush" stage and they were ready to move forward.

It was time to get to work.

One of the hardest things for a woman in leadership to do is be silent.

Yet as we delved into the women's ministry visioning process, that was exactly what the Lord expected of me. I did as I was bade and showed up at the planning meeting with only a rough idea of how to get the ball rolling.

As we began in prayer, the team was relaxed and open to God's leading. The presence of the Holy Spirit was palpable. Great things were about to happen.

I handed out markers and half-sheets of paper to the team and told them to write down a word or two summarizing an idea they had for the women's ministry.

Each time they completed a sheet, I taped it to the classroom wall in front of us. Ideas began to flow and their conversation became more animated. The verbal spark of females brainstorming had ignited in the room and their harmonious chorus was music to my ears. I spoke up only when needing to keep them on point if I felt they'd wandered too far over to social land. I didn't do it often, though. I just listened.

When the conversation began to wind down to the point where they were chatting about their kids and giving me sidelong glances to see what was next, I turned around and faced the paper-strewn wall.

What I saw there was so astounding that I literally rocked in my heels.

The Wall of Revelation

Among the chaos of dozens of thoughts on programs and projects in various handwriting, common threads stood out like veins of gold in a mineshaft.

I asked them what the first thing they saw was and they responded, "There's too much." It was indeed an overwhelming sight, but then I asked what they thought matched to some degree. What were the common threads? As they called out I shuffled the papers around, sticking them together in groups of outreach projects, guest speakers, social times, and intentional studies.

There were some one-offs that didn't fit into any of these categories, so I placed them over to the side.

When we stood back and looked at the wall, there was a moment of awed silence. The Holy Spirit had led them as a team to literally unfold the entire ministry season and beyond with one mind. The four women's "wings" were joined. They were moving forward in unison.

Amid their excitement, I asked the first tough question: "How are you going to accomplish all this?"

Ministry visioning is a wonderful process, but the application must be simple and practical. Otherwise a team is setting themselves up for failure. It was this very issue, big plans with a small volunteer base, that had caused their initial problems–which subsequently spiraled into bigger problems.

And then I asked some more tough questions. "Where is there room in all of this for God to show up? What if he lays on your heart something right in the middle of the ministry year? Are you going to deny him because you're stretched too thin?"

The women returned to their discussion, taking turns verbalizing what they thought were must-haves. They didn't agree on certain points, but they gave one another the space to be heard. This allowance and respect for each to have their say was borne from the relationship they had developed by traveling their lives together.

At last they pared down the plans to manageable chunks, acknowledging that a more simplified ministry year would enable them to "leave elbow room for God" and continue to focus on their growth as a team.

So the women had healed and closed the door to the past. They had deepened their walk with God and bonded and grown in love. Plus, a successful and unified visioning process was now underway.

This was all fine and wonderful within the confines of their team, but the proof was in the implementation. The time had come to nudge these chicks out of the nest and see if they could fly.

Part 2: Raising Up Women for Ministry Leadership: Tales from the Trenches

END_OF_DOCUMENT_TOKEN_TO_BE_REPLACED

Women of the Bible
END_OF_DOCUMENT_TOKEN_TO_BE_REPLACED