Have a Caleb Spirit 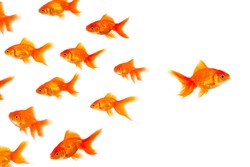 A few days later, Henry Blackaby stood before us, addressing a chapel service. "We don't need politicians in the church," he said. "We need statesmen."

To see how a statesman thinks and acts, look at Caleb. One of 12 spies Moses sent into Canaan, Caleb saw the fortified cities and the giants in the land. Returning to the Israelite camp, he heard the other spies' fear-filled report. He saw the terror in the people's eyes.

Caleb the politician would have known when to go along. Caleb the statesman "tried to quiet the people as they stood before Moses. 'Let's go at once to take the land,' he said. 'We can certainly conquer it!'" (Numbers 13:30).

Did the people rally to his cry? No. All night they wailed, "Woe is us!" Then they started packing to return to Egypt.

Once, a presenter teaching about teamwork sketched on a whiteboard an overhead view of several people in a rowboat. All the rowers faced the same direction–except one. "Who is hurting the team?" the presenter asked.

"The one going a different direction," a chorus of voices responded.

Unless all the others are rowing toward a cliff, I thought.

Fervently, Caleb and Joshua appealed to the crowd: "The land we traveled through and explored is a wonderful land!. If the Lord is pleased with us, he will bring us safely into that land and give it to us. It is a rich land flowing with milk and honey. Do not rebel against the Lord, and don't be afraid of the people of the land. They are only helpless prey to us! They have no protection, but the Lord is with us! Don't be afraid of them!" (Numbers 14:7-9).

Fearing the dissenters' advice would destroy them all, the crowd threatened to stone Moses and Aaron, Joshua, and Caleb.

When almost an entire nation headed the same direction, Caleb was one of four rowing the other way. Was he stubborn, reckless, divisive? Was he presuming on God's help and putting everyone's future at risk? By his persistence in disregarding the political climate, did he needlessly create an uproar that threatened to cost him not only his position, but also his life?

God says otherwise. The Lord rebuked and judged the people. "But because my servant Caleb has a different spirit and follows me wholeheartedly, I will bring him into the land he went to, and his descendants will inherit it" (Numbers 14:24, NIV).

Six times, Scripture says Caleb "followed God fully." Literally, he "was filled with pursuing." His heart was so set on following God that it didn't have room for any competing choice.

Have a Caleb Spirit

END_OF_DOCUMENT_TOKEN_TO_BE_REPLACED

Women of the Bible
END_OF_DOCUMENT_TOKEN_TO_BE_REPLACED